For many people Christmas is a time of long-honoured traditions. At the Hocken this means the decorating of our Christmas tree in the foyer on the 1st of December. It seemed the perfect date to bring in the latest contribution to Stirring up the Stacks, especially one that celebrates the festive season and advertised itself as a “proven recipe”. 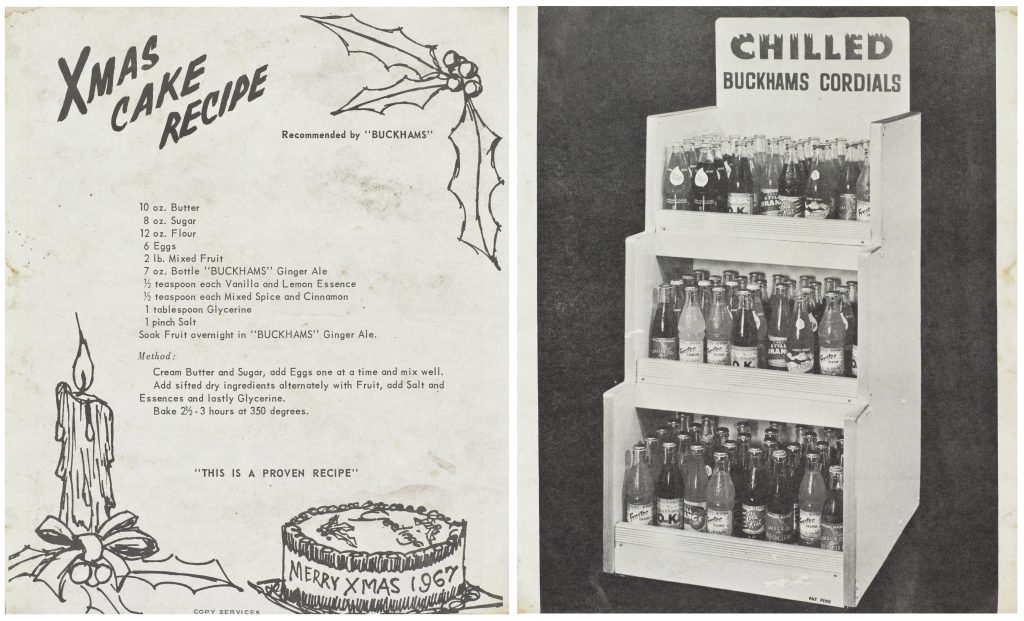 In the Hocken’s Ephemera Collection is a Christmas cake recipe leaflet from Buckhams Cordials that wishes readers a “Merry Xmas 1967”. On the reverse is a photograph of a well-stocked fridge of “Chilled Buckhams Cordials” where we can spot a variety of flavours on the labels including Still Orange, Frostee Orange, Cola Kist, and Jamaica Dry Pale Ginger Ale. Sadly, none of these labels are currently represented in the ephemera collection, but we would gladly welcome their addition if anyone has a collection they would like to pass on.

Buckhams Cordials was a Queenstown company that was established in 1870 as the Wakatip Brewery by William Lovell Davis and Thomas Surman. Their partnership dissolved in 1873, and the brewery and cordial factory continued to be run by Davis until 1880, when he left to take up mining with his brother James. James Read was granted the brewery’s lease and ran the business until his death in 1888. His wife Alice then continued the business until 1901 when management was taken over by Charles Davis, son of William Lovell Davis. In 1908 William Lovell Davis died and the brewery was purchased by his daughter Mrs H.C. Buckham. In November 1915 the brewery side of the business was closed to avoid charges from new beer duty regulations, and the company continued as a cordial manufacturer under Buckham family management. It was eventually sold in 1969 by Jim Buckham to R. Powley and Co. Ltd of Dunedin.

The Christmas cake recipe requires the overnight soaking of mixed fruit in a seven ounce bottle of Buckhams Ginger Ale. This was easily substituted for a modern supermarket brand, but it obviously remains unclear what difference this made to the eventual flavour. Perhaps for today’s bakers, the most unusual ingredient is one tablespoon of glycerine. An internet search revealed it is used to keep cakes moist and icing soft, and a bottle was eventually tracked down in a local health food store. 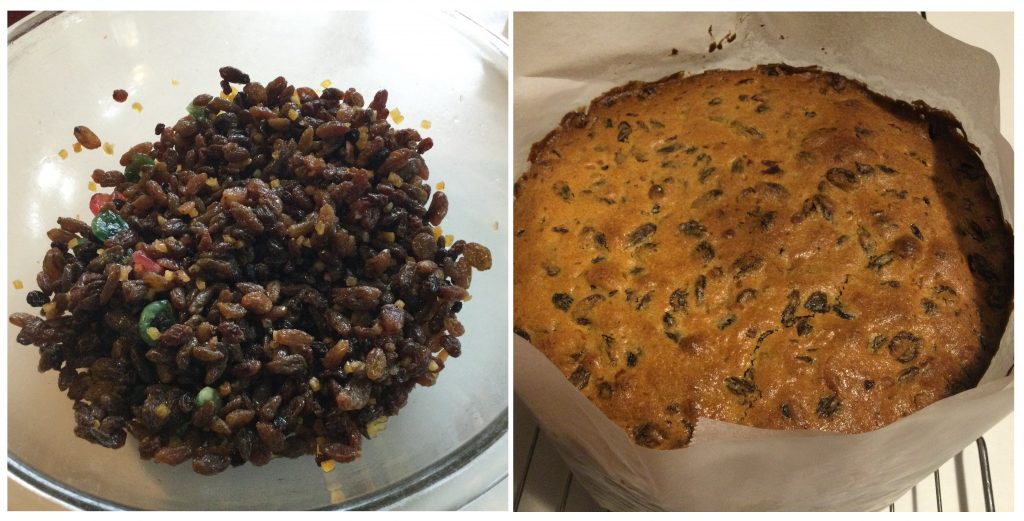 The cake was made following the standard instructions but the recipe lacked any directions about decoration. I decided to make a royal icing that also incorporated glycerine (using a Mary Berry recipe), since I now possess a bottle to be used up! This cake is not suitable for the dietary requirements of all Hocken staff as it contains ten ounces of butter and six eggs, so I also baked a vegan version. This involved the swapping of ordinary flour for self-raising flour, besides the exclusion of butter and eggs, and a lemon juice/icing sugar glaze for decoration. 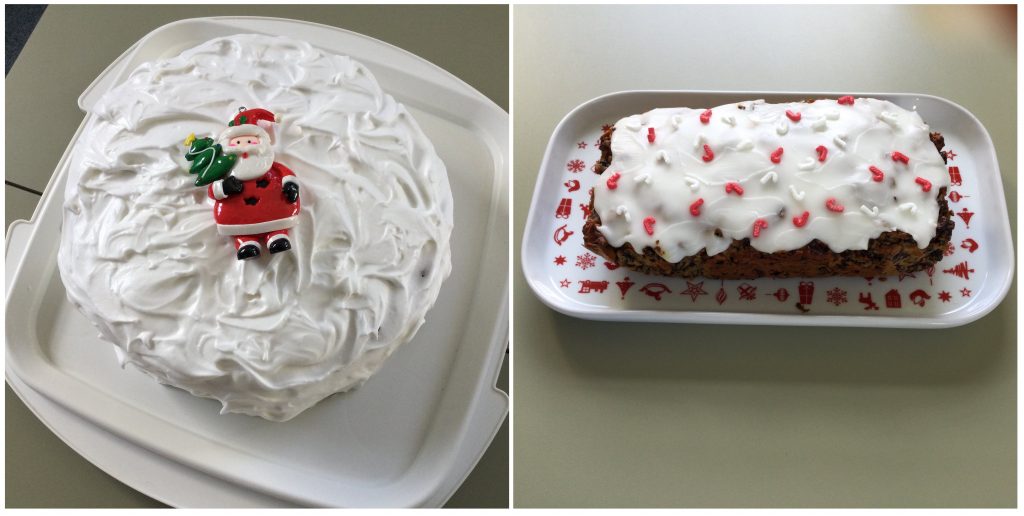 The decorated cake and the vegan version

Staff feedback was positive with most enjoying the cake’s taste and texture, and the royal icing in favour of the more common almond icing. One person rated both cakes a very generous 20 out of 20, and it was gratifying to hear another admit “I don’t really like fruit Christmas cakes, but this is an exception – lovely”. However, as my own Christmas tradition is to make my Christmas cake on Labour Day and feed it weekly with rum to ensure a moist texture and delicious flavour, I would have to concur with the staff member who suggested that this cake “possibly needs to age more?” The texture may have been improved by the addition of more than just the prescribed tablespoon of glycerine. I also would have preferred an increased ratio of spices, with the possible addition of ginger since, as one Hocken staff member noted, the flavour from the ginger ale did not come through.

It is always interesting to learn more about our early business and food history. The ephemera collection includes numerous examples of local advertising that also illustrate the perpetuation of our cultural traditions.

This entry was posted in Christmas, Ephemera and posters, Food and drink and tagged Stirring up the Stacks by Hocken Collections. Bookmark the permalink.

2 thoughts on “Stirring up the stacks #8: Xmas Cake Recipe Recommended by “Buckhams””