To open a volume of The Otago Police Gazette is to enter into a colourful world that warrants investigation.  What follows is a series of observations based on issues from the early and mid-1870s.

The Gazette served as a key communication tool for the police force between stations and regions.  Without photography or modern electronic communications, police work would have been very different in the late nineteenth century to how it is today.  Nonetheless, their reliance on the circulation of written material is part of what makes for such a fascinating document now. 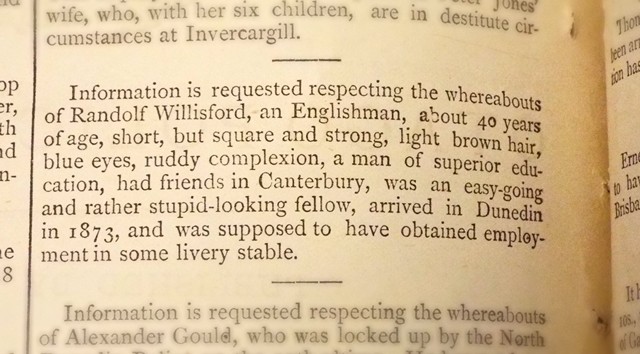 The mug shot was not yet employed as a means of recording appearance.  Consequently, vivid textual description is used, often offering more information than what a photograph could ever provide.   For instance, a group of wanted felons were described variously in the 30 November 1872 issue: Thomas Sheehan had a “dirty sulky appearance, [and] speaks with a broad Irish accent;” William Walsh “always keeps his mouth open;”  James Cummins was of a “coarse Yankee appearance,” and Thomas Howe had “thin features, Roman nose, smart appearance, [and was] fond of horse-racing.” 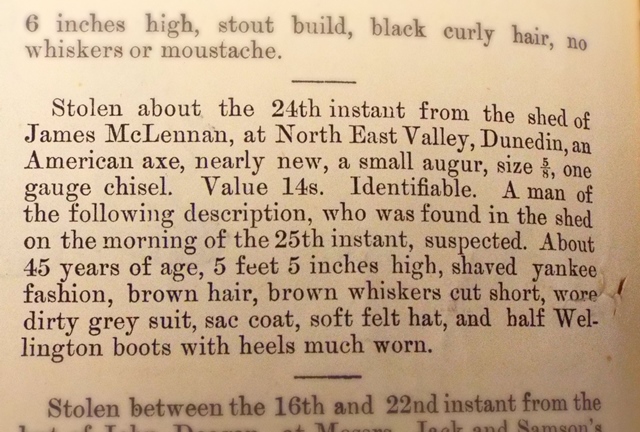 Edward Chaplin was described in the 30 September 1871 issue as “a clerk and mining agent, below the middle height, broad shoulders, stooped and awkward gait, fresh complexion, grey hair, grey prominent eyes – occasionally bloodshot – very short sighted, Jewish appearance; he usually keeps his hands in his trousers pockets and looks on the ground when walking; he was dressed in a black sac coat, dark grey overcoat, dark striped trousers, and black silk hat; addicted to drink.”

Throughout the yellowed pages, charges for larceny, lunacy, vagrancy, disorderly conduct and habitual drunkenness abound.  Other cases illuminate societal concerns: “furious riding” and “sly grog-selling” were both frowned upon, as was “occupying a house frequented by reputed thieves.” 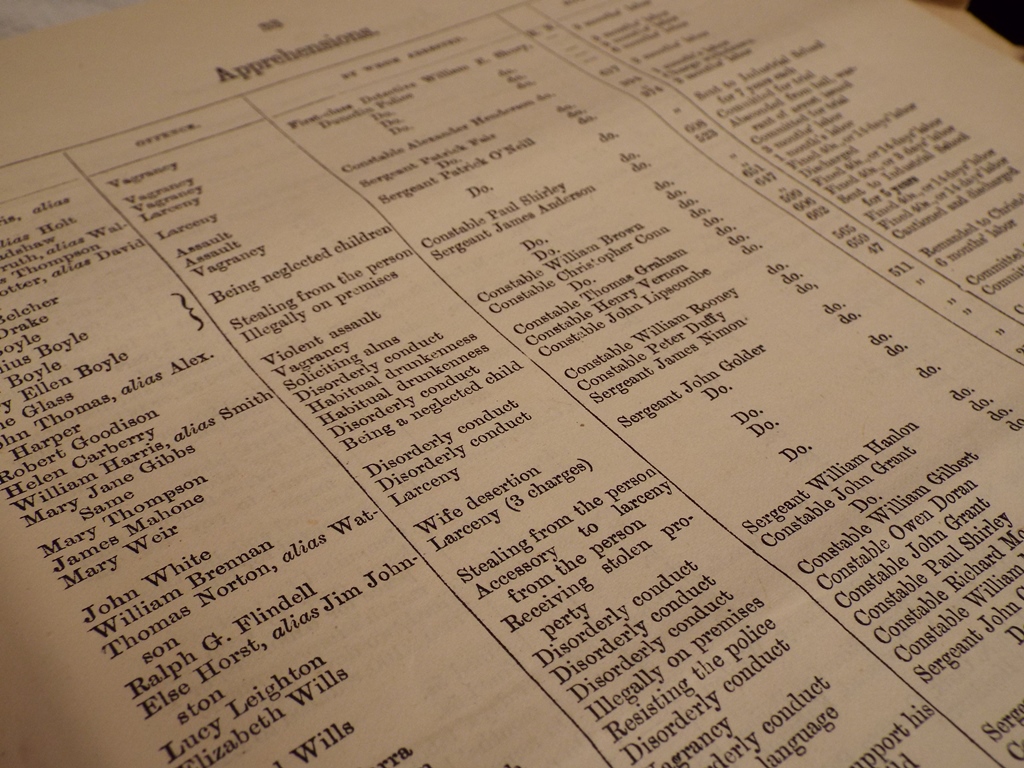 Anxiety for the wellbeing of citizens is also apparent, with men charged for deserting their wives and for failing to support their mothers.  Children, too, could find themselves arrested for “being neglected,” or for “being a criminal child;” the usual outcome of this was a sentence of some years at the Industrial School.  Women tended to attract charges of vagrancy and drunkenness, whereas men were the usual perpetrators of a wider range of offences.  Serious and violent transgressions also arose, among them assault with intent to commit rape, attempted suicide and murder. 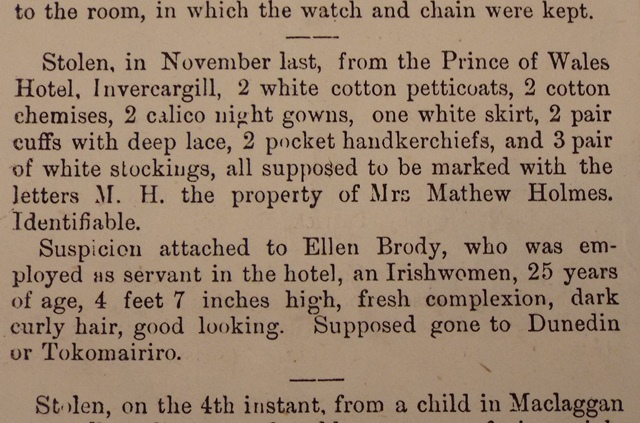 Māori appear infrequently over the period surveyed, but Chinese names are occasionally interspersed amongst those of British and European origin, both as perpetrators and as victims of crimes.

The pages are filled with reports of items stolen (watches, horses and money dominate), warrants issued, and inquest findings.  Lost and found property is recorded, as are “missing friends” such as Edward Chaplin described above.  Offenders apprehended are listed alongside their punishments, and further tables record those arrested, tried, and discharged from prison during the past weeks.  Descriptions of former prisoners are provided, with notes made of any distinctive features such as tattoos or physical abnormalities. 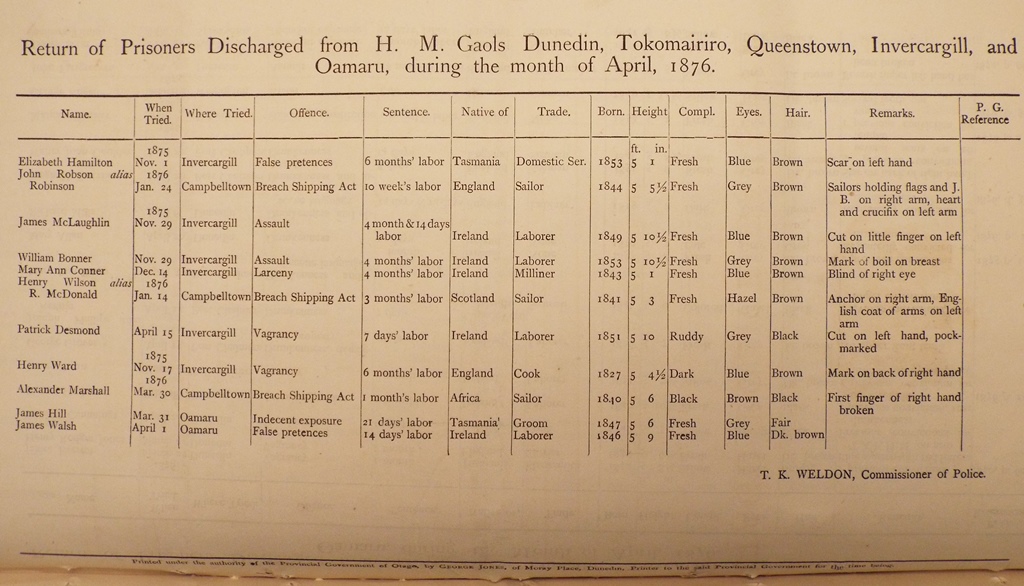 Submissions to the Gazette range from the mundane through to the grim and distressing.  Some cases appear trite or even comical to the modern eye.  Yet, on reflection, they show us the anxieties, concerns, and troubles of those living in the earlier days of our province.

Every entry in the Gazette hints at a richer story on the part of both victim and perpetrator.  I can’t help but wonder at the implications and outcomes of certain cases, and if those with missing friends were ever reunited.

What was it like inside Mount Eden Prison in the early 1960s? A manuscript discovered among Ernie Webber’s papers tells a colourful story. Himself a prisoner, Webber encouraged the writing of another inmate, Bert Pimley, whose novel The Rock Orchid is based on experiences inside. According to Webber, prison authorities applied ‘some viciousness’ when they discovered the manuscript, which they destroyed. Another copy was smuggled out, and Webber later tried to get it published. He was unsuccessful, but the typescript survives in his papers along with related letters and illustrations. The title refers to a character who resembles the beautiful but parasitic rock orchid.

Here are a few excerpts (with original spelling and punctuation):

Officer Desmond Rice was certainly a pathological study. Any time the women in the female division started a riot, Rice went across wearing a boxing glove on one hand, to knock a little sense into them. He got great satisfaction from this, mostly because he could not hurt his hand with the glove on it, nor leave marks on the women, but even if he did, who would believe such accusations, levelled at a responsible deputy principle officer? It stretched people’s credulity a lot when officer Dinny Burns and another, broke a girl’s arm, because she was a trifle independent. This was New Zealand. Such things could never happen here.

“If you get shifted to the basement, try not to get the ‘craps’,” advised Horne.
“Why? Is that bad?” Pintal wanted to know.
“It’s bad enough. There’s over ninety men living down there, and only one crapper. Of course, you could always use the pot in the cell if you liked.”
Also in the basement was the shower-house, kit-locker, and the “pound”, that dismal row of cold, empty punishment cells reserved for bread and water victims. Within the encircling walls was a fully-equipt boot-making shop, a tailor shop, a joinery department, laundry, tin-smiths shop, and a small department devoted to the manufacture of mail-bags. This prison even boasted a school-room and a chapel.
As they wandered about, Pintal and Horne were approached by a grinning chap, who told Cliff that young Tipu had just had a spot of bad luck. Got caught with Symes, said the chap, and went off, chuckling, to spread the news.
What did he mean by that, Cliff?” Berne asked.
“Tipu’s got bad habits. Gets himself shagged now and then by Bill Symes”

Gus Powell, the receiving officer, banned all comics that had guns in them, and all cheap books that had guns or half-dressed women on the covers. This was New Zealand’s toughest prison, not a Boys Home.
The officers in the sentry towers whiled away the tedious daylight hours furtively reading cow-boy books, and wing officers dodged into cells at any opportunity, to read a few chapters of almost anything lying about.
The magazine Man, a harmless monthly edition given to short stories and pictures of scantily-clad females, was banned, as also was the magazine People. But if one looked about enough, both of these editions could be found somewhere in the prison. The New Zealand weekly scandal paper, Truth, was definitely off-limits within the confines of the Mount, although a copy could usually be had, if perhaps a few days late. 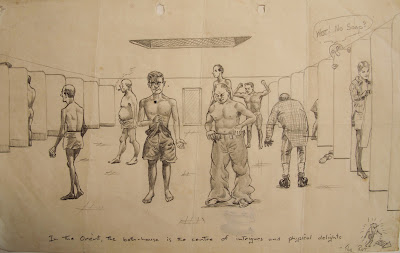 Webber’s papers came to Hocken twenty years ago, but it was only during recent arrangement and description work that The Rock Orchid and other treasures came to light. Webber (1906-1983) was an intrepid New Zealand businessman. He was involved with the McArthur investment scandal of the 1930s, sold munitions in China during World War Two, and invested in forestry and other ventures back in New Zealand. He had passions for travel, entertaining, railways, and book collecting, and was part of New Zealand’s underground gay culture (the reason for one of his two spells in prison). All of these aspects of his life come through in his varied collection of personal and business papers of over ten shelf metres.

For a look at Ernie’s interest in collecting Railways books see
http://www.library.otago.ac.nz/exhibitions/all_aboard/index.html