I came up with this idea upon spotting a recent children’s book by Gavin Bishop, Cook’s cook: the cook who cooked for Captain Cook, appear on the new arrivals shelf at the Hocken. What caught my eye was that the cook in question, John Thompson, only had one hand. What a challenge it must have been for Thompson, attempting to prepare meals for dozens of men, on a ship being rolled around by the merciless ocean, using 18th century technology and ingredients that often did not store well or were opportunistically harvested along the way, many of which most of us would turn our noses up at today (anyone keen for penguin, seal or turtle?). Actually, I think that’d make for a great contemporary cooking show. Let’s chuck Gordon Ramsay into a cramped little box that pitches and rolls around like a ride at an amusement park, and make him cook haute cuisine for dozens of amused onlookers using an assortment of random (and questionably fresh) ingredients using nothing but a woodfire oven… with one hand tied behind his back. I’d watch that! 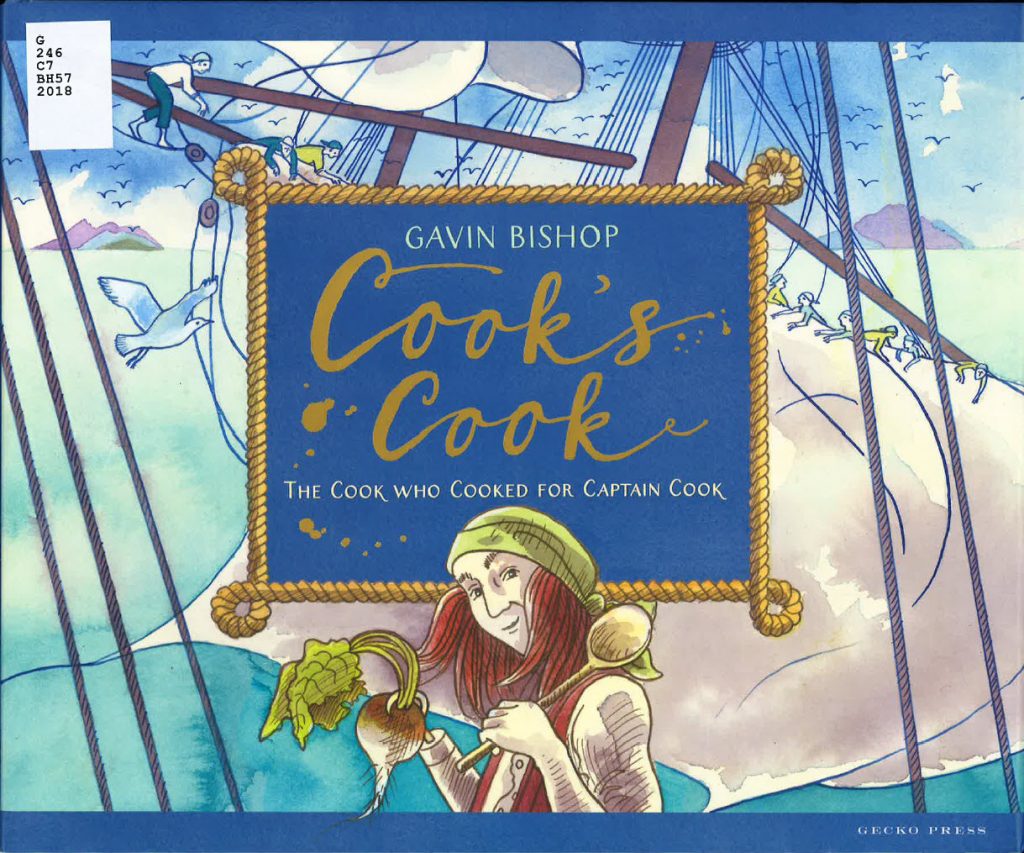 What attracted me to cooking something in the realm of what may have been served on board these voyages was that at the time I spied this book I was also (temporarily) one handed, having recently broken my elbow. So I endeavoured (insert cheesy dad joke grin) to become a one handed cook myself and see if the food served aboard the ships was really as bad as it sounds. Admittedly, extended preparation time of my dish, combined with a rather unfortunate mishap which set me back a few weeks (keep reading), meant that by the time it actually came to serve my dish to my colleagues my elbow was fully healed.

So what type of fare was typical on board Cook’s voyages to New Zealand? Cook set out with provisions for a two year voyage, unsure of where and when they may have the opportunity to resupply with fresh water and food. Eighteenth century sailors were a hardy bunch, and there was little room for fussiness when it came to food. Eat what you were served or perish. 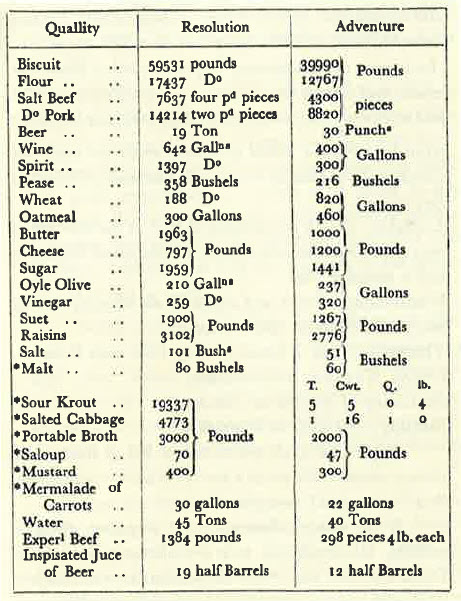 While Cook had loaded his vessels with a variety of livestock, this was primarily for leaving behind on islands they encountered during the voyage, and generally only those animals which did not survive the voyage were consumed on board. What meat was available for consumption was usually subjected to heavy salting in order to prevent the meat from spoiling, thus extending the shelf life for long trips. Other protein came primarily from what birds or sea creatures could be caught along the way.  The same was said for produce, with unknown plants harvested for food from islands along the way. Consumption of some poisonous species in the South Pacific resulted in the deaths of a pig and a pet parakeet, although no sailors suffered the same fate (Burkhardt et al. 1978: 132).

However, due to the large number of Hocken staff who are vegetarian or vegan, I wanted to prepare a dish which would cater for as many of our staff as possible, so I opted to use two of the absolute staples from Cook’s galleys: bread and sauerkraut. The third major staple on board these voyages was booze, which was consumed regularly in lieu of fresh clean water, although I decided that serving beer at work during morning tea was perhaps unwise. 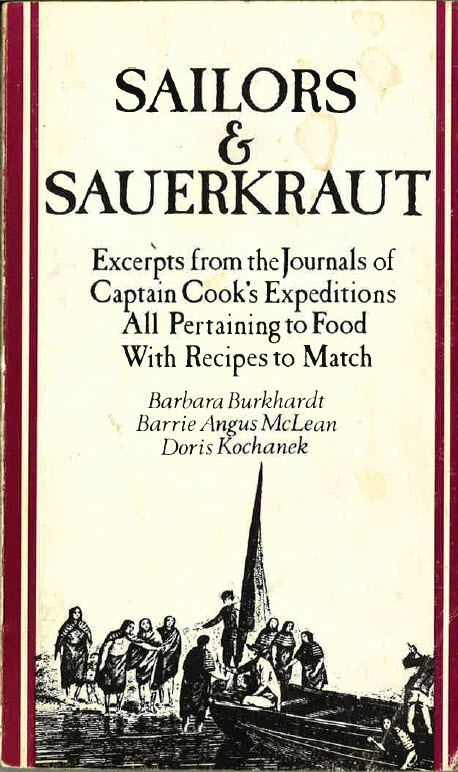 In the stacks I found a book called Sailors and Sauerkraut (Burkhardt et al. 1978). The authors of this volume scoured the journals of Cook, Banks and others for references about the food and beverages which were consumed during their voyages to New Zealand, and subsequently produced a recipe book inspired by those references. I chose to recreate their recipe for Sauerkraut Roll.

This was perhaps a little ambitious considering I’d never even tasted, let alone tried to make sauerkraut before. The recipe seemed straightforward enough. Just cabbage and brine. But it does take several weeks to ferment. My first batch appeared to be going well and after a while began to take on the characteristic sauerkraut smell of ‘sweet farts’ (I’m really making this sound appealing!).

Enter catastrophe. After several weeks of waiting it came time to have a taste test. As I moved my container to the kitchen bench for tasting my clumsiness got the better of me and I ended up with my entire batch of sauerkraut pasted across the kitchen floor. So I started again.

Once the sauerkraut was ready it was time to prepare the rest of the dish for morning tea. I opted to double the following recipe. 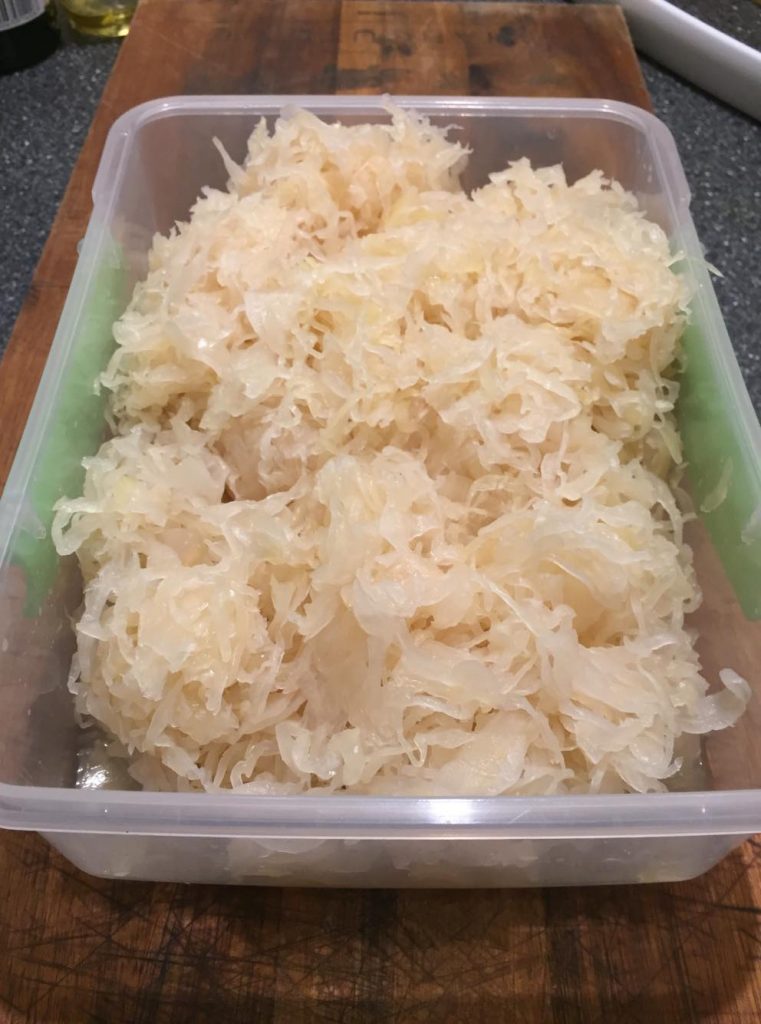 The sauerkraut is ready

Mix the yeast with the lukewarm milk and add the flour. Knead dough until it is smooth and elastic, then put in a warm place to rise until double in volume. Roll out the dough to a size large enough to wrap around the filling.

Spread half the onions and croutons on the dough and cover with a layer of sauerkraut. Repeat. Carefully roll everything up, sealing the ends of the roll so that nothing will leak out during cooking. 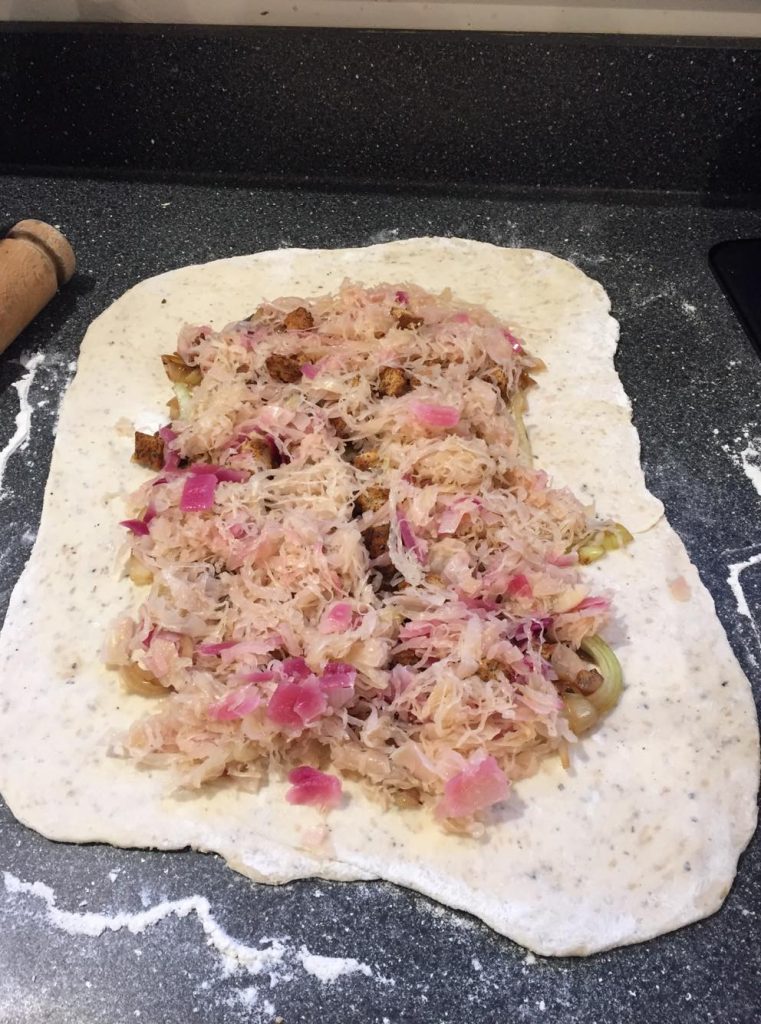 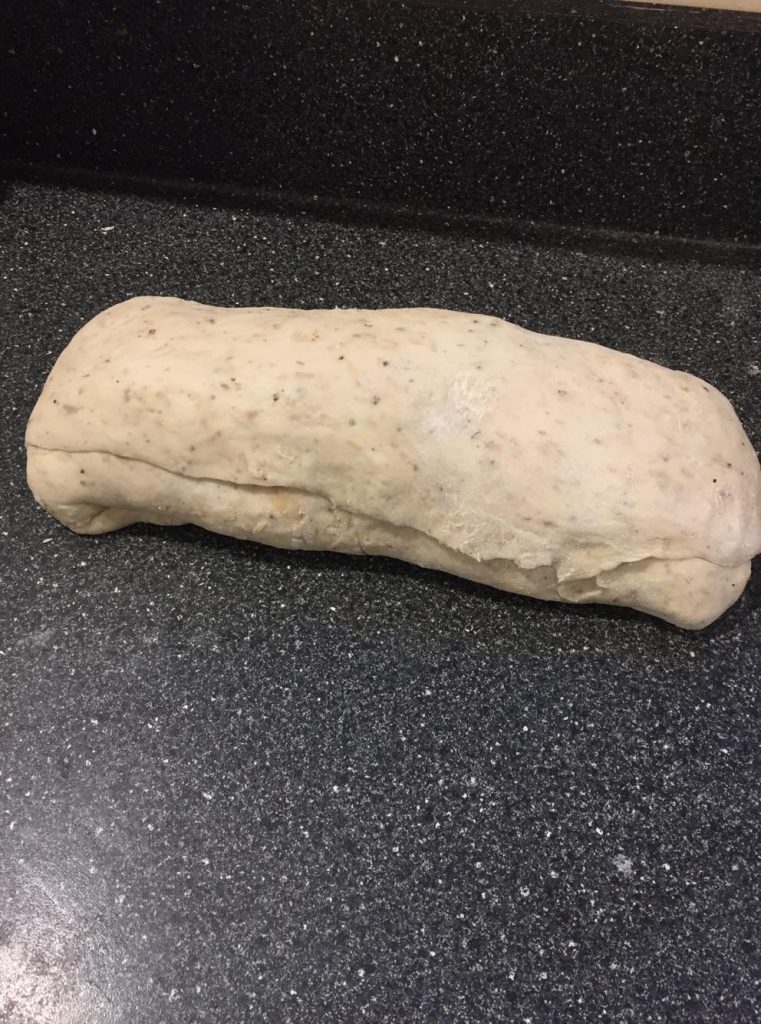 All rolled up (like a “sauerkraut calzone” according to my feedback)

To make it look a little less rustic (debatable) I prepared some caramelised onion as a garnish.

On the morning of serving I arrived at work with the rolls raw, gave them a quick glaze with olive oil, garnished with the caramelised onion and popped it in the oven first at 220˚C for 10mins, and then at 180˚C for a further 30mins until nice and golden. 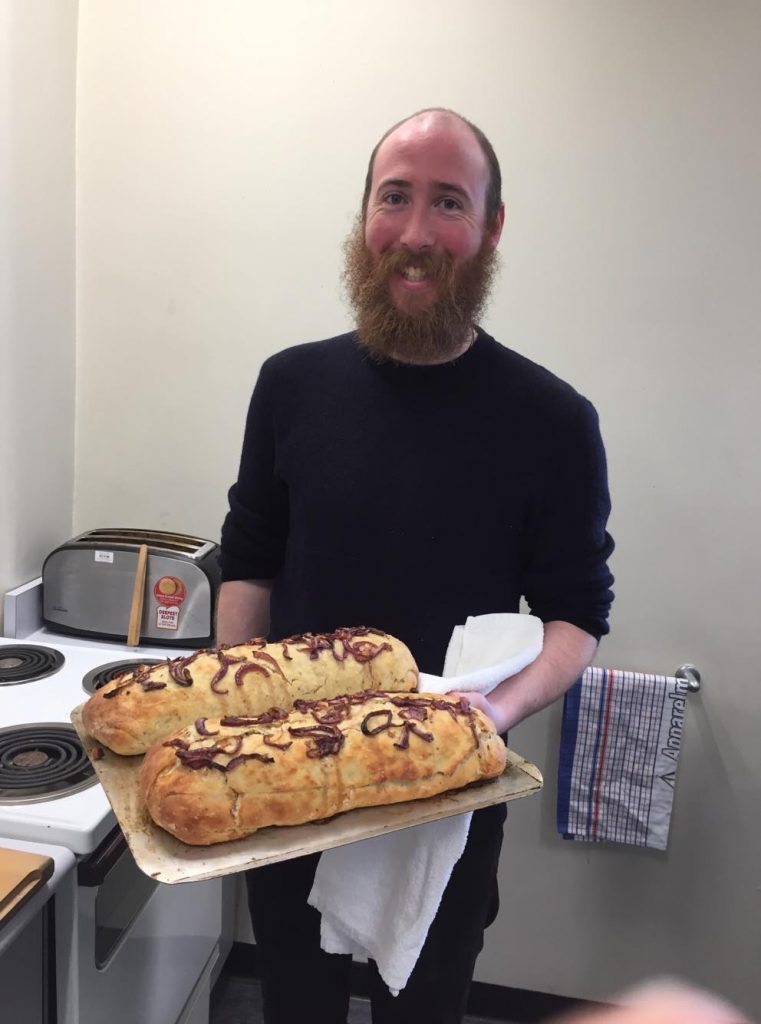 They came out looking much better than I’d anticipated, but the real test would come down to taste. My personal opinion was that it tasted fine, but certainly better than expected. I just don’t think sauerkraut is really my thing. The following are a selection of comments left in the anonymous comments box during tasting:

“visually appealing, which was surprising”

“…would definitely be great with a beer”

“Delicious! What were the sailors complaining about?”

and my personal favourite:

“tasty, and the perfect meal to prevent shipboard romance on long trips”

Overall, certainly a reasonable tasting novelty which provoked some decent discussion, but given the effort I think it’s fair to say I won’t be attempting this one again any time soon.

This entry was posted in Food and drink, Ships and shipping and tagged Stirring up the Stacks by Hocken Collections. Bookmark the permalink.