To celebrate Music Month in 2017, here’s a brief look at a collection of papers relating to a local Dunedin label. 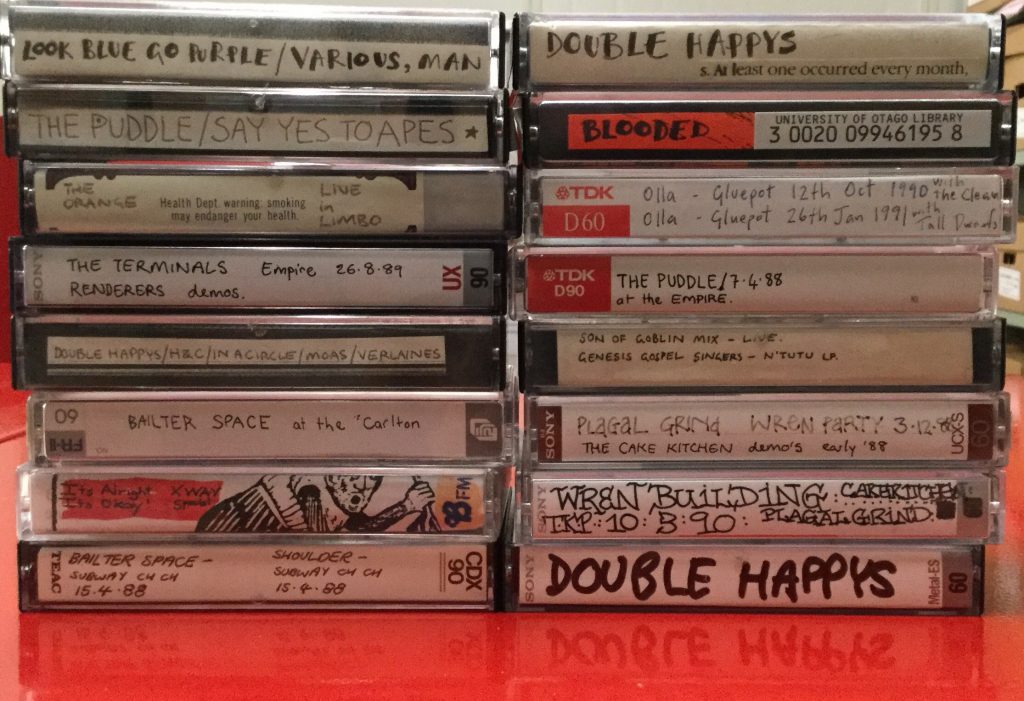 Xpressway Records began life as a cassette-only label in late 1987/early 1988, run out of Bruce Russell‘s home in Port Chalmers. Russell – archivist, writer, musician (in A Handful of Dust, and The Dead C) – began Xpressway Records with help from fellow musicians Peter Gutteridge, Alastair Galbraith and Peter Jefferies following Flying Nun’s 50% acquired by Mushroom Records. Russell worked for Flying Nun in their Christchurch offices for a time in the 1980s, and saw the label was moving away from its original ideals with the merger. The acquisition by a major label meant attention was focused on more commercial Flying Nun acts, and many were let go from the label.

Russell was disillusioned by these decisions, and when artists like Jefferies and Galbraith were released from their Flying Nun contracts, he decided to in his words “show [Flying Nun] a thing or two,” as their music was just as valuable as the label’s more commercial counterparts. To give these artists and their music a home, he began Xpressway Records. In Russell’s opinion, “we should make the music available to those people that want to hear it, and if those people are a scattering of people all over the world in tiny niches within other national markets … fine… it’s just what we’ve got to do” (Russell, 2000). 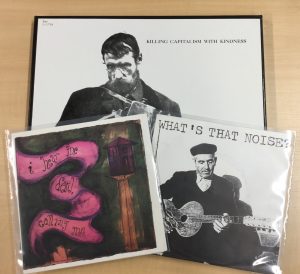 Xpressway started as a cassette-only record label, but expanded to include vinyl and CD releases. Overall, there were over 20 Xpressway releases, with other recordings licensed from the label. Artists on the label included 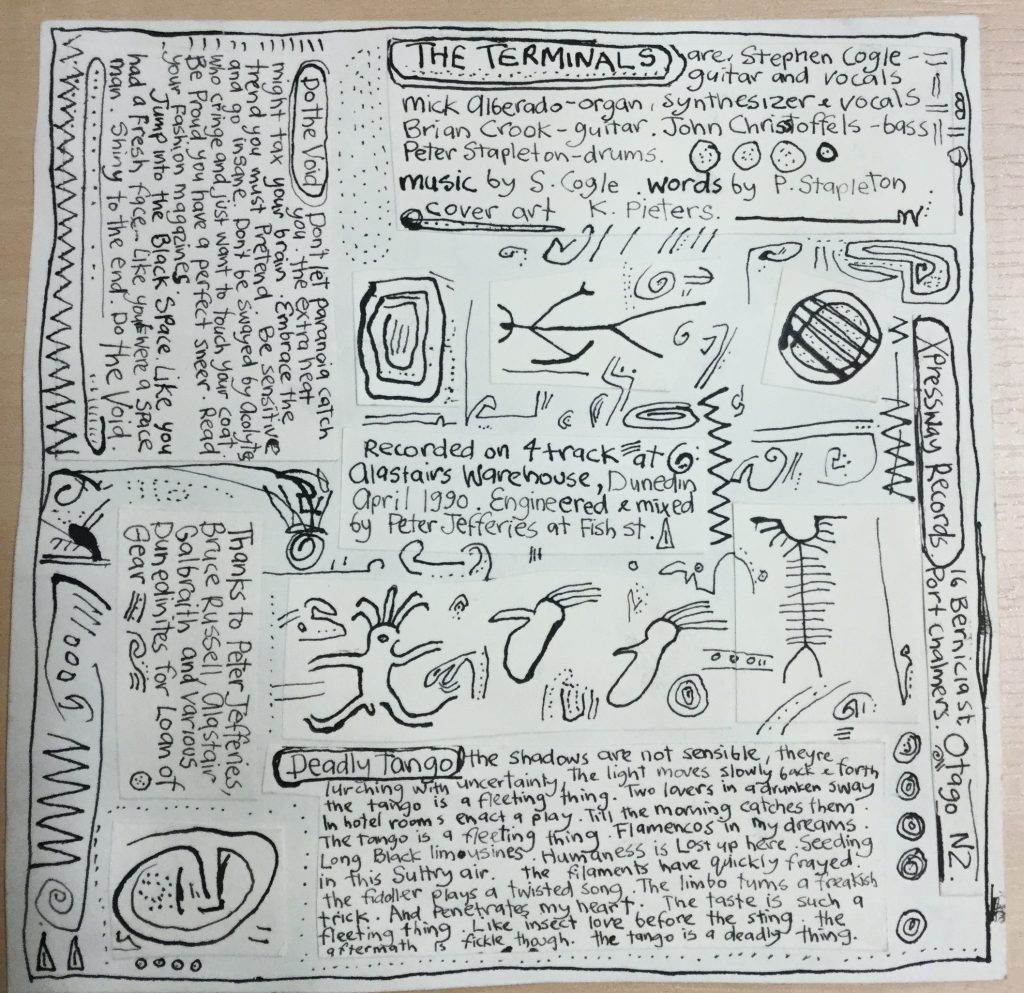 Mock-up of the back cover of the Terminals’ single Do the Void. Xpressway: Records of a Dunedin independent record label (1988-1993). Hocken Archives, 94-156

In 1993, Russell wrapped up the label, and, in 1994, gave Hocken the Xpressway archives. Russell also included other items in the donation: over 100 posters of local artists, and over 50 cassettes of live recordings of acts associated (mostly) with Flying Nun or Xpressway. 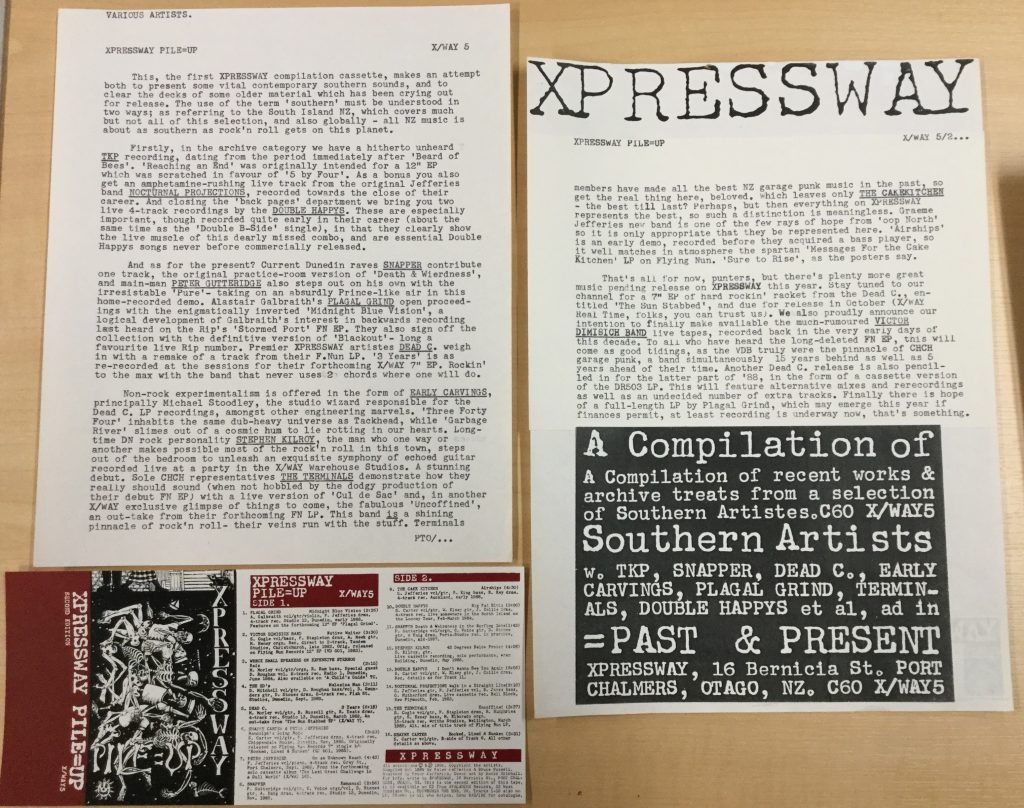 The archival papers are rich in content, and include 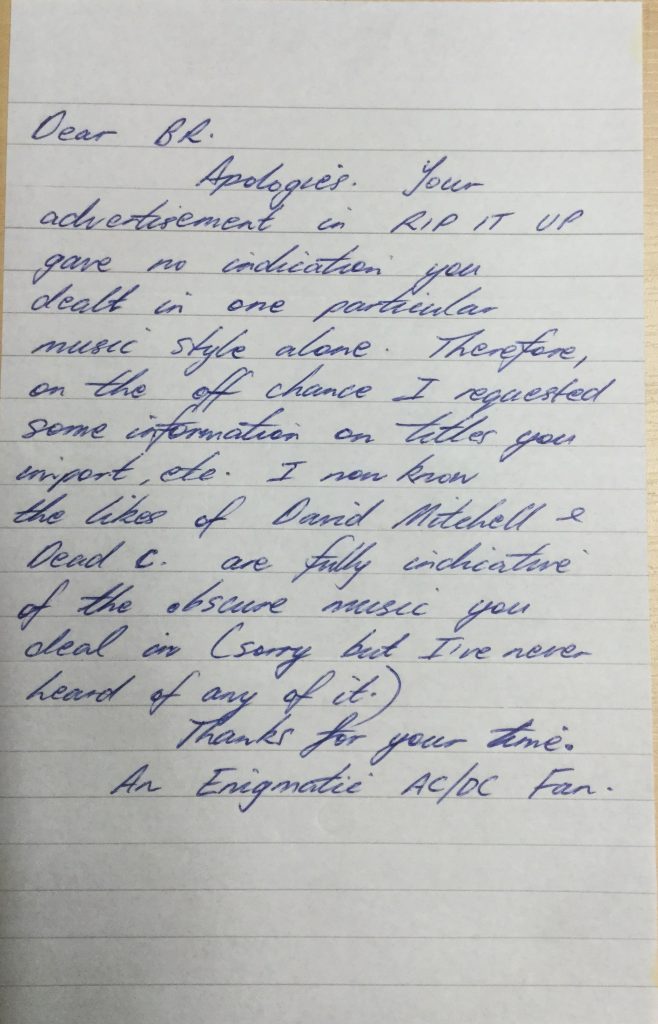 Correspondence between Russell and musicians reveals the frustrations, irritants, and (in some cases) jealousies between different parties. While this is in the guise of official correspondence between artist and the label, it is often personal in nature reflecting the close knit nature of the Xpressway music community. It is also interesting to note that hand-written, typed, or faxed messages are on any blank surface: the backs of photographs, envelopes, flyers, aerograms (remember those?), newsletters from Russell’s’ place of employment – it is all used. Much interesting material is contained in the folder relating to Flying Nun, with business correspondence again revealing the frustrations and everyday realities of supply and distribution between labels, especially those relating to finances. The letters and faxes between Russell and Flying Nun staff running the label day-to-day in Auckland are friendly and informal; they relate personal and industry stories and reveal common frustrations with business, distribution, and (quite often), the musicians. Other folders also contain interesting – and often hilarious – exchanges between the label and correspondent. 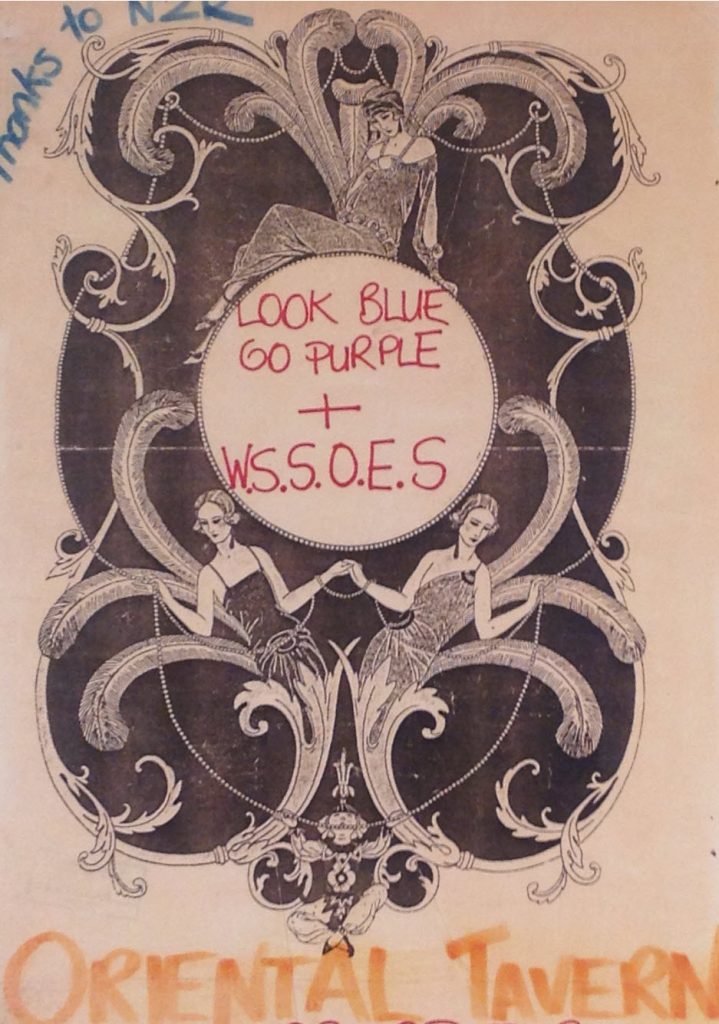 Along with the papers are the posters and cassettes that Russell donated. The posters relate to gigs and album releases, and highlight local bands and artists (many on or associated with Xpressway), and many are hard to find. The tapes capture mostly live performances and some radio shows by local artists, but also artists from around New Zealand, in many different venues around the country. Some are recording sessions, or demos of material that may not have been released, and we are aware that these are possibly the master tapes for a number of recordings. 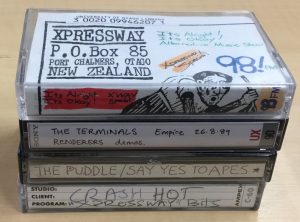 The Xpressway papers and recordings are used by students and other researchers, with material frequently published on the artists, the label, and the wider scene. The popularity of the label, and the music that emerged from it will only increase the intrinsic value of this collection. The Xpressway papers (and associated recordings) are a fascinating look at how an independent record label is run in a small music community, where artists often performed in each other’s bands, or on each other’s recordings.

This entry was posted in Archives and manuscripts, Audio visual, Entertainment, Ephemera and posters, Music, Popular culture by Anna Blackman. Bookmark the permalink.