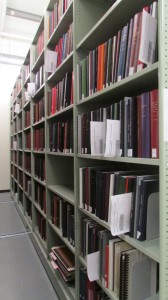 University of Otago History theses at The Hocken Collections

It’s always encouraging to see the final results of research carried out at the Hocken, from books and interpretation panels to newspaper articles and television shows. But undoubtedly one of our favourite things is to see the dissertations that post-graduate students have been sweating over, often for several years. 2014 was a stellar year for graduations of people who spent many hours poring over the treasures of the Hocken for their dissertations. Thanks to the wonders of modern technology, some of these can even be read on-line.

Nister Kabir came all the way from Bangladesh to study at Otago. He made extensive use of our newspaper collection for his PhD thesis, New Zealand media constructions of Islam and Muslims: an analysis of selected newspapers between 2005-2006.  Also from the Department of Media, Film and Communication at Otago was 2014 PhD graduate Donald Reid, who made good use of our serials and books collections for his thesis Solid to liquid culture: the institutional, political and economic transformation of New Zealand state broadcasting. He also found the Hocken a peaceful place in which to write! Another PhD graduate who made good use of our serials collection was Trudie Walters, of Otago’s Department of Tourism. Her dissertation, An analysis of media representations of the luxury in and of second home ownership in New Zealand 1936-2012,  revealed the value of all those old home and building magazines.

Archaeologists dig out information from archives, books and pictures as well as from the ground, and a couple of 2014 graduates from Otago’s Department of Anthropology and Archaeology used the Hocken while completing their dissertations: Peter Petchey’s PhD was titled The archaeology of the New Zealand stamp mill  and Megan Lawrence’s MA was Backyard historical archaeology: unraveling past lives through analyses of the archaeological remains from 26 St David Street, Dunedin.

Unsurprisingly, some of our biggest users are the post-graduate students of Otago’s History and Art History Department. We were delighted to see the completed PhD theses of Grace Bateman (Signs and graces: remembering religion in childhood in Southern Dunedin, 1920-1950),  Sarah Carr (Preserving decency: the regulation of sexual behaviour in early Otago 1848-1867), Daniel Davy (Lost tailings: gold rush societies and cultures in colonial Otago, New Zealand, 1861-1911),  Jill Harland (The Orcadian odyssey: the migration of Orkney Islanders to New Zealand 1949-1914 with particular reference to the South Island), and Jane McCabe (Kalimpong kids: the lives and labours of Anglo-Indian adolescents resettled in New Zealand between 1908 and 1938) last year, and also the MA theses of Nic MacArthur (Gold rush and gold mining: a technological analysis of Gabriel’s Gully and the Blue Spur, 1861-1891)  and Christine Mulligan (The Dunedin Hospital art collection: architecture, space and wellbeing).  All delved into our archives and publications collections – we saw a lot of Daniel, Jill and Nic in particular. Then there were all the BA (Hons) dissertations. History and art history students found material in our collections on a wide range of topics for these in 2014: pensions, shipboard writing, Smithells and physical education, women in the police, Philip Trusttum, Maori divorce, surveyor John Turnbull Thomson, US intelligence, female assisted migrants and Robin Morrison.

Of course, not all our student researchers are from the University of Otago, or even from New Zealand. We have met postgrads from Canada, the United States, Japan, England, Australia and the Czech Republic over recent times. In 2013 Hocken researchers completed dissertations in several Canadian and Australian universities. We aren’t aware of any who graduated in 2014, but we’re keeping an eye out!

Several students from other New Zealand universities completed theses based on significant research at the Hocken. Genevieve De Pont read lots of Hocken diaries for her Auckland PhD, ‘Tourists like ourselves’: New Zealanders’ international travel diaries and their journeys, 1919-1963,  and Joanna Bishop used our archives for her Waikato PhD, The role of medicinal plants in New Zealand’s settler medical culture, 1850s-1920s.  Claire Le Couteur also delved into our archives for her Canterbury PhD, Dentist, doctor, dean: Professor Sir Charles Hercus and his record of fostering research at the Otago Medical School, 1921-1958. Rachel Patrick of Victoria University of Wellington based her entire thesis – An unbroken connection? New Zealand families, duty, and the First World War  – on our large collection of archives of the Downie Stewart family. We’ve seen quite a bit of Vic post-grad students in recent years; others who graduated in 2014 were Nicholas Hoare (New Zealand’s “critics of empire”: domestic opposition to New Zealand’s Pacific empire, 1883-1948) , Erin Keenan (Maori urban migrations and identities, “Ko nga iwi nuku whenua”: a study of urbanisation in the Wellington region during the twentieth century),  Rebecca McLaughlan (One dose of architecture, taken daily: building for mental health in New Zealand)  and Richard Thomson (At home with New Zealand in the 1960s).  Material from the Hocken also appeared in the dissertations of a couple of Massey University graduates, Tupu Williams (Te Poihipi Tūkairangi: te poutokomanawa o Ngāti Ruingārangi/the central support post of his hapū Ngāti Ruingārangi)  and Annabel Wilson (From Aspiring to ‘Paradise’: the South Island myth and its enemies. A critical and creative investigation into the (de)construction of Aotearoa’s Lakes District).

Our hearty congratulations to everybody who graduated in 2014! We salute your hard work, your contribution to knowledge and the creative use you have made of our collections.

This entry was posted in Research, University of Otago by Anna Blackman. Bookmark the permalink.