In Hocken’s 78rpm disc collection there is an anomaly: over 100 American pop standards by US artists. For a collection of New Zealand material, this is a significant exception to our collection development policy, and more than just an example of a popular genre. There is little to explain why these discs are in the music collection, but our records state they were donated by Mr Grant Fleury in the late 1990s, and were (according to staff recollection) part of an estate collection.

So, why would a collection of New Zealand material include these items? One potential reason for keeping these discs, is that they are all NZ pressings of international labels, including Columbia Records, Decca Records, His Masters Voice, and Capitol Records. However, there are between 50 and 100 of these recordings, so this collection is more than just an example of local label pressings. Some of the titles are jazz, pop, and rock’n’roll classics that shaped popular music in the 20th Century, coming at the end of the 78rpm era. Titles include:

Ella Fitzgerald: Happy Talk. A track from the very popular musical “South Pacific”, Ella Fitzgerald recorded the song with Gordon Jenkins and his orchestra in 1950, and this led to them recording an album soon after. 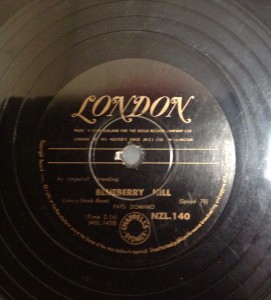 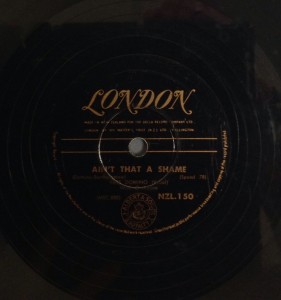 Fats Domino, Ain’t That A Shame

Nat King Cole: Unforgettable b/w Mona Lisa. Unforgettable was recorded in 1951, with the Nelson Riddle Orchestra, and with Riddle’s arrangement. Cole remade it in 1956, and it was remade again  in the 1990s as a beyond-the-grave duet with his daughter Natalie. It is backed with an equally popular song, Mona Lisa, which won the 1950 Academy Award for best original song from the film “Captain Carey.” 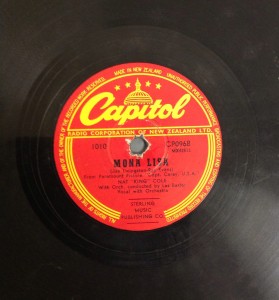 Having these recordings in the collection presents a conundrum – are they a one off exception to the collection development policy of collecting material by New Zealand artists? Or, was there a valid reason for adding international music into the 78rpm disc collection, when there was no apparent local link in terms of composer, or performer?  They are an interesting addition to the collections of early popular music, and their influence is felt widely throughout local New Zealand music of the same time.