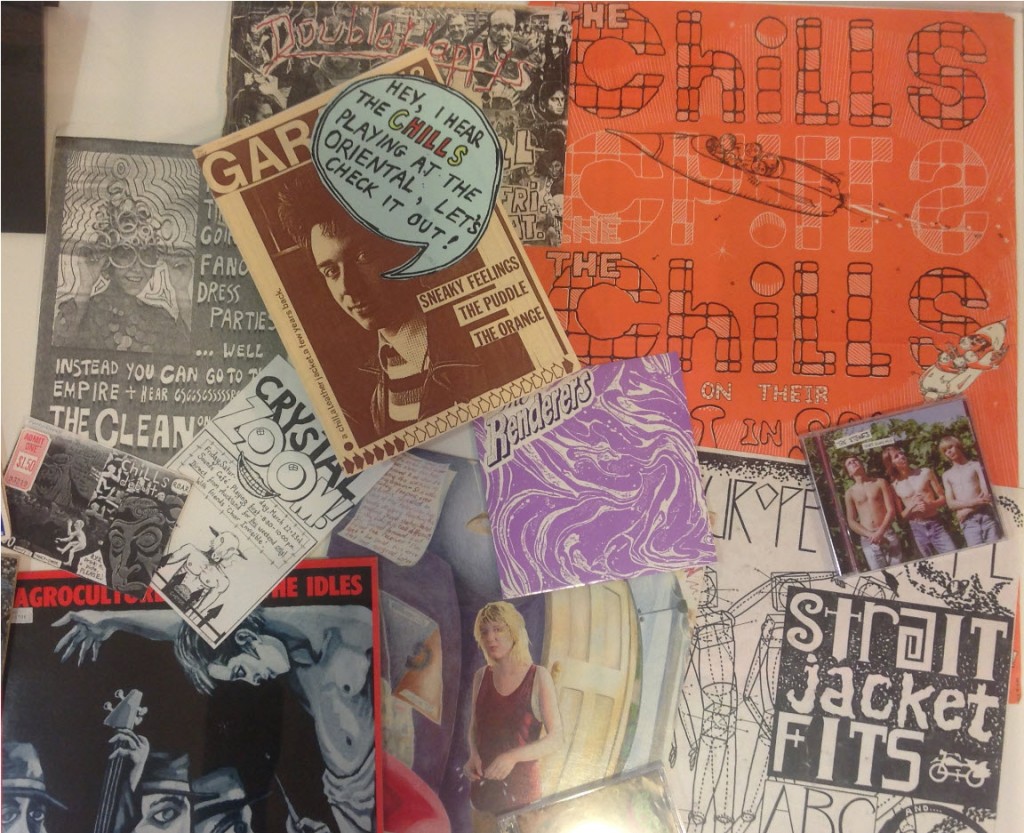 The Dunedin Sound is a phrase used widely to describe a particular sound in independent music (most often on the Flying Nun label) that emerged from Dunedin in the 1980s. Currently, there are a number of people who claim ownership of the phrase ‘Dunedin Sound’, but it is commonly attributed to The Clean’s guitarist, David Kilgour, who uttered it in an interview. The phrase is contentious: many people deny there was ever such a thing as the ‘Dunedin Sound’, while others are adamant it existed. However, it is a convenient term to use when describing local bands from that era, in particular The Chills, The Clean, The Verlaines, The Bats, Look Blue Go Purple, and Sneaky Feelings – all bands that used (to a greater or lesser degree) an underlying  drone, or a jangly guitar in their sound. Dr. Graeme Downes (guitarist, vocalist and songwriter with The Verlaines) argues that there is a ‘Dunedin Sound’, found in the songs themselves, within structural and compositional commonalities. Other factors fit too: isolation, the weather, and finding that their diverse inspirations all filtered through a similar mindset. The right time, and, crucially, the right place.

It has been argued the ‘Dunedin Sound’ began with The Clean’s Boodle Boodle Boodle EP (which was very popular, selling over 10,000 copies, and attaining the no. 4 place in the charts), and then continued with The Chills, the Stones, The Verlaines, and Sneaky Feelings (a.k.a The Dunedin Double), which is still a benchmark for local independent music – compilations such as Wellington’s Four Stars, and last year’s Fishrider Records compilation Temporary were heavily compared to it. 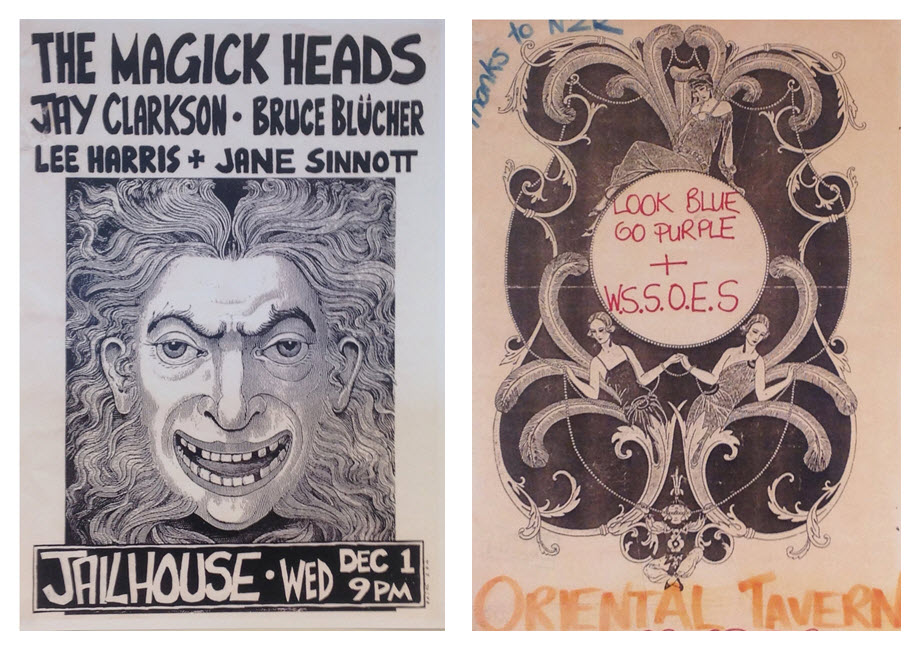 The Hocken’s collections are rich in material from this music sub-genre, spread throughout our different collections – Posters and Ephemera include treasures such as one-off gig posters, such as these by the Magick Heads and Look Blue Go Purple, and invites to parties where the bands played; Garage, Hahaha, and Kahoutek zines all feature in-depth interviews with the musicians. Within the archives, a copy of Martin Phillipps’ recent oral history with Helen Frizzell resides, and the Xpressway papers are a mine of information about releases and careers of local musicians signed to the label (many formerly on Flying Nun). The accompanying Xpressway cassette collection was transferred to the published music collections, and these tapes include rare, and early, live recordings of bands and solo artists. There is research too – theses by Craig Robertson and Sian O’Gorman provide information on the bands and the music, as well as the creative scenes surrounding the musicians. Our publications hold books on New Zealand music that include the local scenes and profile the artists, and our music clippings files cover not only ‘Dunedin Sound’ bands and artists, but also the wider Dunedin music scenes and genres. The recorded music collection is richest in terms of the core of the ’Dunedin Sound’ – the actual recordings. We hold some of the hardest-to-find music releases because we collected them at the time of release, and, thus, have a collection deep in content. While not 100% comprehensive, original recordings and reissues are constantly being added to the collection – many new items purchased recently have been reissues. In addition, as part of the Audioculture function held at here on May 14th this year, we were generously gifted the original design for the initial Flying Nun logo (a one-eyed cherub holding an LP), a significant addition. 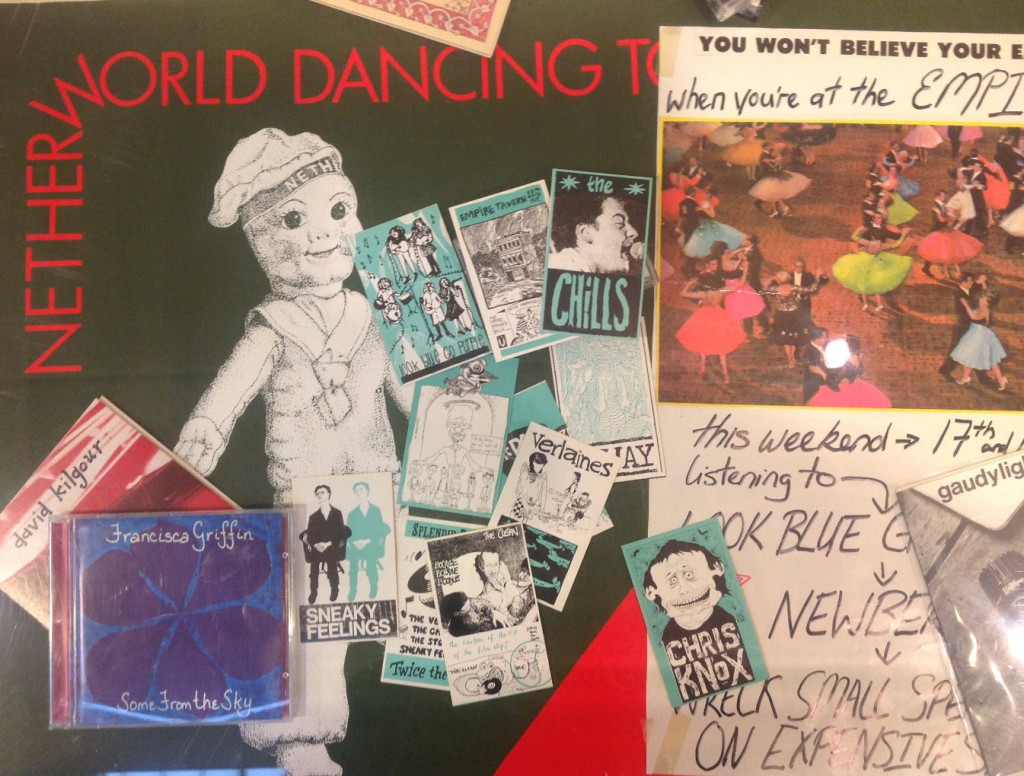 Music is subjective: here are my 10 favourite ‘Dunedin Sound’ recordings in the Hocken’s music collections, between 1981 and 1996. How many of these do you know?

Finally, it’s worth bearing in mind that many of these bands and artists are still making records:  new Chills and Verlaines’ albums are coming, Shayne Carter has a new solo album out this year, and The Clean and The Bats have toured locally and internationally recently.

8 thoughts on “The Dunedin Sound?”