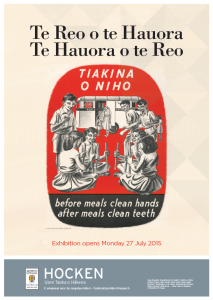 Every year for Te Wiki o te Reo Māori the Hocken develops a Foyer Exhibition to promote Māori collections, Māori research and Māori language. In 2015 Jeanette Wikaira and Dr Anne Marie Jackson from Te Kura Parawhakawai, the School of Physical Education, Sport and Exercise Sciences, worked with the Hocken’s poster collection to develop Te Reo o te Hauora – Te Hauora o te Reo. This small exhibition examined Māori Health Promotion posters to plot the development of Hauora Māori, looking at the wider socio-political context from which Māori health promotion grew, from the 1950s through to more recent Māori health promotional campaigns. The display also considers how the development of Maori Health corresponds with the health of the Māori language through the increasing use to Te Reo Māori within health promotional material. From this collaboration, an online exhibition will also be developed with Te Koronga, a Māori postgraduate research excellence group within the School of Physical Education, Sport and Exercise Sciences.  The Hocken has digitised a collection of Māori Health Promotion posters for this project ranging from the 1950s through to the 2000s; some of which came from the University of Otago’s Smithells Gymnasium and were donated to the Hocken from the School of Physical Education. 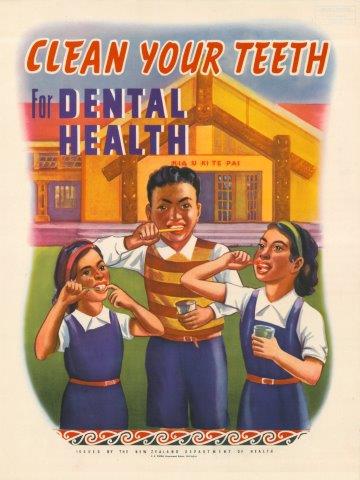 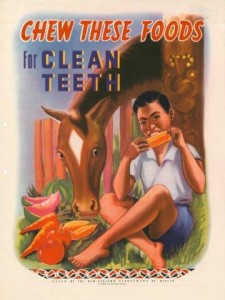 Historically health promotion for Māori applied generic health promotion campaigns to Māori individuals and communities. The health promotion objectives seen in the posters from the 1950s, was to promote European notions of ‘good’ health to Māori such as cleanliness and sanitation and framed within a deeply entrenched view that Māori needed to assimilate into European society in order to survive. A commonly held perception from the mid-nineteenth century through to the early twentieth century was that the Māori people, language and culture would be incapable of withstanding the progress of Western civilisation and colonisation. 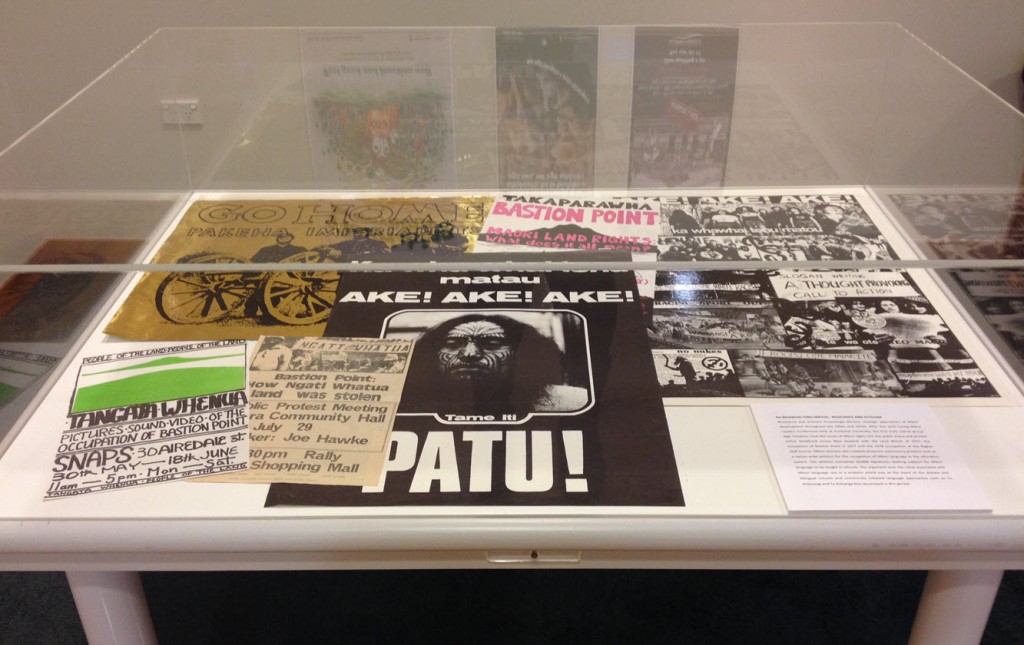 Resistance and activism increasingly became strategic approaches of Māori development throughout the 1960s and 1970s. After the 1970 Young Māori Leaders Conference held at Auckland University, the first truly radical group, Ngā Tamatoa, took the issues of Māori rights into the public arena and protest action headlined across New Zealand with the Land March of 1975; the occupation of Bastion Point in 1977 and the 1978 occupation of the Raglan Golf Course. Māori activism also created proactive community projects such as a nation-wide petition for the recognition of Māori language in the education system. The petition contained 30,000 signatures seeking support for Māori language to be taught in schools. The argument over the value associated with Māori language use in a modern world was at the heart of the debate and bilingual schools and community initiated language approaches such as Te Ataarangi and Te Kohanga Reo developed in this period. 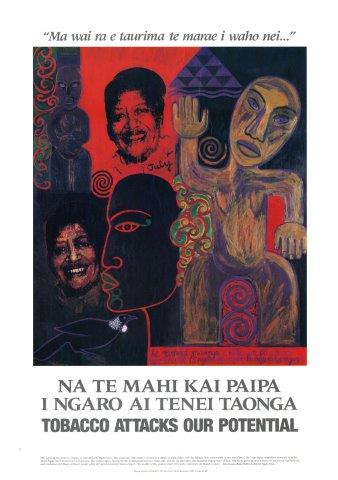 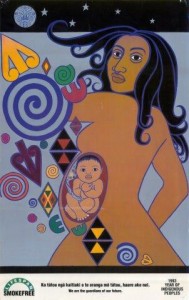 Self-determination ran at the core of Māori protest in the 1960s and 1970s. This protest acted as stimulus for change and the creation of ideological space for contemporary Māori development. The decade of Māori development launched at the 1984 Hui Taumata heralded major transformations in approaches to Māori social, cultural and economic advancement. As part of the transformative process, a Māori developmental agenda was incorporated into government strategies and policies and this can be seen in the Māori health promotional material over this period. Māori health promotional material transformed radically throughout the 1980s and 1990s in comparison with previous decades.  The use of Robyn Kahukiwa’s art was instrumental in creating a visual imagery of Hauora Māori that situated Māori in the Māori world. With this new imagery and a heightened use of Te Reo Māori in the form of whakatauaki or traditional sayings, Māori health messages at this time, many of which had an anti-smoking message, were reframed from a deficit approach to a more positive and aspirational approach referring to Māori health as a taonga to be nurtured. 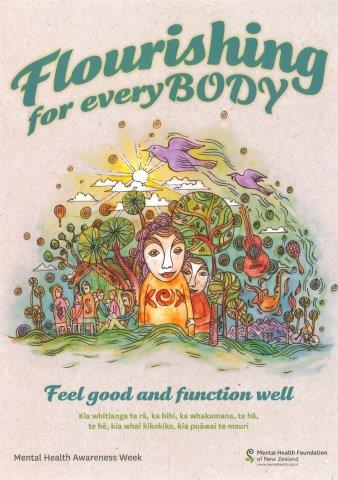 Hauora Māori recognises a notion of health that is framed within the parameters of a Māori worldview and requires a sound understanding of the social, economic, political, cultural and historical determinants of health among Māori people. A Māori worldview is the cultural and philosophical perspective of Māori health that maintains continuity with traditional knowledge, identity, language, customs and beliefs, along with contemporary and future focussed perspectives. In this way, Māori health is not limited to physical, mental and spiritual conditions of today. It recognises the relationship with past experience and knowledge, as well as aspirations and concerns for future generations. Māori health promotional material from the 21st Century moves some way towards reflecting Hauora Māori, in particular with the use of Te Reo Māori and the portrayal of Māori in everyday contexts. However with changes in Government funding priorities and the development of iwi Māori ability to provide Hauora services and messages directly to their communities, Māori health posters over recent years, when compared to previous decades, have taken on a mainstream approach to Māori Health promotion. 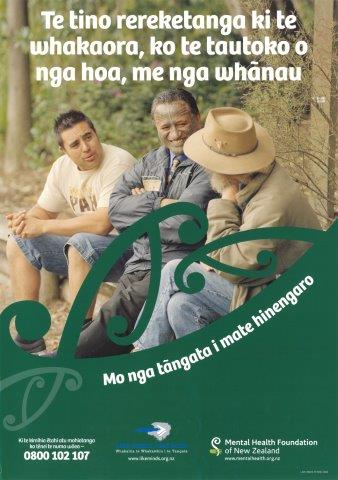