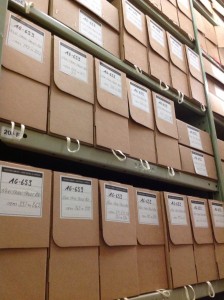 Through the generosity of Sir Tipene O’Regan, the Ngai Tahu Maori Trust Board and the Crown Law Office the Hocken Collections holds copies of the Wai 27 claim papers that are available for researchers to use. The picture doesn’t really do the papers justice, there are a total of 82 boxes of papers rich with information on the history of Ngai Tahu. To find the papers search by the reference numbers AG-653 and MS-2448 in the Hakena database.

The papers are a rich source of information not just on the claim but also of Ngai Tahu history.

The Kai Tahu (or Ngai Tahu) inquiry began with a claim, Wai 27, registered in August 1986. It was brought by Rakiihia Tau and the Ngai Tahu Maori Trust Board, but as the Tribunal said, it was ‘really from and about Ngai Tahu, an amalgam formed from three main lines of descent which flowed together to make the modern tribe’. The inquiry was extensive – over a period of three and a half years, 23 hearings were conducted and the Tribunal received 900 submissions and heard from 262 witnesses and 25 corporate bodies. The claim was presented in nine parts, known as the ‘Nine Tall Trees of Ngai’. Eight of these ‘trees’ represented the different areas of land purchased from Kai Tahu, whilst the ninth represented Kai Tahu’s mahinga kai, or food resources. A number of grievances were attached to each of the nine tall trees, and these came to be known as the ‘branches of the Nine Tall Trees’. There were also a number of smaller claims, which came to be described as the ‘undergrowth’, or ancillary claims. The Ngai Tahu Report came out in 1991, the Ngai Tahu Sea Fisheries Report in August 1992, and the Ngai Tahu Ancillary Claims Report in May 1995. In the Ngai Tahu Report, 1991, the Tribunal concluded that many of the grievances arising from the Crown’s South Island purchases, including those relating to mahinga kai, were established, and the Crown itself conceded that it had failed to ensure that Kai Tahu were left with ample lands for their needs. The Tribunal found that, in acquiring more than half the land mass of New Zealand from the tribe for 14,750 pounds, which left Kai Tahu only 35,757 acres, the Crown had acted unconscionably and in repeated breach of the Treaty, and its subsequent efforts to make good the loss were found to be ‘few, extremely dilatory, and largely ineffectual’. After the Ngai Tahu Report was released, the Tribunal also put out a short supplementary report in which it referred to the need for tribal structures to be put in place to allow Kai Tahu to conduct remedies negotiations with the Crown. The Tribunal supported the proposals regarding representation that the claimants had made and it recommended that the Ministry of Maori Affairs introduce legislation constituting the Ngai Tahu Iwi Authority as the appropriate legal personality to act on behalf of the iwi in those negotiations. The ‘Sea Fisheries Report’ dealt with the issue of Kai Tahu’s fisheries, and reported that, as a direct consequence of the loss of their land, Kai Tahu were ‘unbable to continue their thriving and expanding business and activity of sea fishing’. The Tribunal found that, in legislating to protect and conserve fisheries resources, the Crown had failed to recognise Kai Tahu’s rangatiratanga over the fisheries and in particular their tribal rights of self-regulation or self-management of their resource. It also found that the quota management system then in place was in fundamental conflict with the terms of the Treaty and with Treaty principles. The Tribunal recommended that the Crown and Kai Tahu negotiate a settlement of the sea fisheries claim, that an appropriate additional percentage of fishing quota be allocated to Kai Tahu and that Waihora (Lake Ellesmere) be returned to them as an eel fishery, and that the Fisheries Act 1983 be amended to allow for ‘mahinga kaimoana’, or specific marine areas set aside for iwi. The ancillary claims report dealt with 100 of the ‘undergrowth’ claims and showed how the 35,757 acres that Kai Tahu had been left with were further eroded by public works and other acquisitions. Of the 100 claims, 41 were found to involve breaches of the Treaty, and as a result, the Tribunal recommended that the Public Works Act 1981 be amended and proposed changes to the way that the Crown acquired land from Maori for public purposes. (From the report summary prepared by the Waitangi Tribunal).