Julie Dunn (Kai Tahu / Kāti Māmoe) has been a key figure in the Ōtepoti Dunedin music scene since founding the independent label trace/untrace records in 2017 with label partner Richard Ley Hamilton. The label has released key recordings (many on the it-will-never-die cassette format) by a large number of emerging and up-and-coming local Dunedin artists, including Neive Strang, Koizilla, Adelaide Cara, Asta Rangu, Night Lunch, and Dunn and Hamilton’s band Bathysphere.

The theme of Te Marama Puoro o Aotearoa / New Zealand Music Month 2022 is ‘level up’ – encouraging all members of the music industry to raise awareness of new, emerging, and up-and-coming musical artists. This includes supporting these artists in their music career development and helping them to cross over to a broader audience. trace/untrace records have been key in doing this mahi. 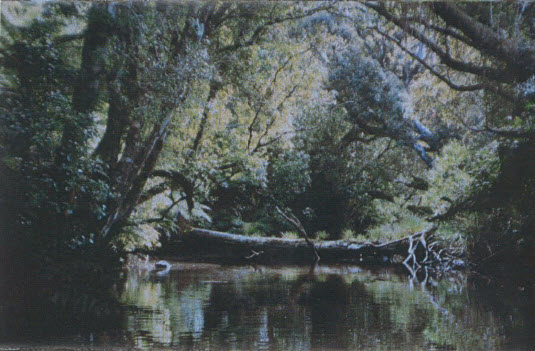 Hocken Collections: What is your musical background?

Julie Dunn: “I was introduced to the local music scene when I snuck into an Idiot Prayer gig in my final year of school (2011). It was eye-opening to say the very least (life changing might be a more accurate way to put it…). From that time on I started gravitating towards the scene and the people who had introduced me to it, and within a year I had become a dedicated roadie to my friends’ band A Distant City (Josh Nicholls, Zac Nicholls, Nick Tipa, CJ Holley). Over the years their bands would proliferate at speed, however all the while I remained in the role of roadie / manager / merch maker / door person. It wasn’t until after trace / untrace had begun that I started to write my own music, and alongside that formed Mary Berry and played my first gig in 2018.”

What made you decide to establish trace/untrace and support local artists?

“Years of being involved with the scene had fostered a great love of Dunedin music and the people here who make it. The number of bands that my friends were gigging in was increasing at speed, and at that time there were about four releases recorded and ready to see the light of day. Richard and I decided to action an idea we had been chewing on for some time and start a small label to collect those releases together. Our main kaupapa at that time was to support the bands to create freely by helping them to handle the (often off-putting) admin bits that come with releasing music, and to find a way to make a physical format more accessible by making cassettes ourselves.”

How long have you been involved with the label?

Where did the label name come from?

“We brainstormed a bunch of names, mostly from music that inspired us. trace / untrace was a riff off the Sonic Youth lyrics in their song New Hampshire, ‘trace paper fly onwards’. It also alludes to the ephemeral nature of so much Dunedin music, especially that stuff which only existed in band practices and at gigs, and which was never recorded. Even things that were recorded were often removed later from Bandcamp by the artists. Although we were about to start immortalising people’s music in the form of cassettes, we wanted to preserve that wairua and centralise it within our mahi.”

trace/untrace releases some material on cassette. What was the attraction of that format?

“There are so many things that I love about cassettes! Initially it was just that they were the cheapest, easiest thing to make, and it was something that we could produce at home rather than having to outsource. Once we started to make them I came to realise also that they are a hugely tactile format, in the same way as vinyl I guess, in the winding of the reels and physicality of the analog medium. I love the sound quality as well, the cassette lends a compression to the music that always tends to compliment the type of music that we release. I have always had circa 1994 vehicles with their original tape players intact and loved the sturdiness of my tapes in comparison to how I remember CD’s performing. When I bought Peter’s first Fazed on a Pony cassette I played it on repeat in the car for about 4 months every day and it’s still going strong.”

What was your involvement with the rehearsal/performance space the Attic?

“The Attic had many forms over the decade or so that it was a home to creatives in Dunedin. I became involved a few years after its inception when my partner formed a band (Space Bats, Attack!) with Lee Nicholson, one of the members there. From that time in 2012, it supported every band that we were involved with, and a thriving community grew up around it. I think there’s no way trace / untrace would exist without it; in many ways the two things were synonymous – the Attic was the place, trace / untrace was the face. It’s so true that often you don’t appreciate what you have until it’s gone, and although I always felt so lucky to be a part of the Attic and the community it represented, I only now appreciate how empowering it was for us to have a space that we had a level of agency over to springboard our projects out into the wider scene. We are sorely feeling the loss now! “

The theme of Te Marama Puoro o Aotearoa / New Zealand Music Month 2022 is ‘level up’ – supporting emerging or up-and-coming artists. Do you see much support for emerging artists in the wider local music community?

“In Dunedin there’s definitely an incredible culture of tautoko for younger bands. Initiatives like Amped Music Project have been amazing in driving that sort of mahi, and even informally there is so much interest in younger people and the music they are making. If I’m completely honest, sometimes I feel like bands down in Dunedin can be overlooked within the national music scene purely because we are out of the way, and potentially have to push harder for the same amount of recognition in comparison to bands who live in the bigger centres. Funding-wise this can often be apparent, and I think it’s likely related to the criteria for getting that funding being based on things that are made easier by living in a main centre. However, as has been the story for years now in Dunedin, our single biggest challenge is the lack of venues and landlords willing to rent practice spaces to musicians!”

Where do you think the local music scene and independent label scene is heading?

“More bands, and more diversity in those bands. As we all recover from the Covid thing I expect there is going to be a lot of pent-up energy released over the next few years in the form of high-output.”

How would you describe the current Dunedin music scene?

“To be honest I have been pretty out of touch with it recently as Covid has put me deep in to hermit mode. To me the Dunedin music scene is currently embodied by the Crown Hotel and those bands that play there almost every weekend. Obviously I can only speak for my own niche in the scene but it feels like the energy is there in spite of the venue situation. Albums are still coming out every month and tours are back on, hopefully there’s good things on the horizon.”

What is next for trace/untrace?

“Next year we are losing the Bank St HQ and will need to find a new recording studio / practice space. Aside from that, there are heaps of releases that I’m so excited to announce over the next few months, and without a doubt are some of the best music we will have ever released! We’ll just keep churning out the tunes regardless of anyone listening.”

For further information on trace/untrace records, check their website https://www.traceuntracerecords.com/