John Buchanan, Milford Sound, looking north-west from Freshwater Basin, 1863, watercolour 222 x 509mm. Donated to the Otago Museum by Peter Buchanan in 1898 and transferred to the Hocken Library in 1948. Hocken Pictures 7,445

It is always a surprise when encountering art works known from reproduction to discover how small they really are.  John Buchanan’s Milford Sound from Freshwater Basin 1865, is a modest in size but grand in conception.  It was made to show the wonders that lay over the Southern Alps, recently explored by James Hector of the Otago Geological Survey and went on display at the New Zealand Exhibition of 1865.

Sketches for the watercolour were made in November 1863 when the Survey’s chartered boat, the Matilda Hayes, was guided by Henry Paremata to anchor at Anita Bay at the entrance to Milford Sound.  Hector’s report to John Hyde Harris, the Provincial Superintendant, was serialized for the Otago Daily Times and conveys some of the excitement he felt:

“The scenery is quite equal to the finest that can be enjoyed by the most difficult and toilsome journeys into the Alps of the interior, and the effect being greatly enhanced as well as the access made more easy by the incursion of the sea …into their alpine solitudes.”

“The sea in fact now occupies a chasm that was in past ages ploughed by an immense glacier, and it is through the natural progress of events by which the mountain mass has been reduced in altitude that the ice stream has been replaced by the waters of the ocean.  The evidence of this change may be seen at a glance.”

The head of Milford Sound was the ideal place to recuperate from the arduous six month sea journey from Port Chalmers:

“Two hours sail brought us into a fresh water basin, where we anchored, and next day, as I intended to remain here some time, a large tent was put up on shore, and everything in the yacht taken out and overhauled…”

Ever observant of life in the natural realm, Buchanan has depicted the Sound without the Matilda Hayes evident, but with frolicking dolphins and birds in residence.  Hector describes the novelty of the surrounding smorgasbord of stones, speculating optimistically on the possibility that there might be gold in the hills:

“The geological structure of the mountains around Milford Sound is more complicated than in any other part of the West Coast that I have examined.  The prevailing rock is syenitic gneiss, associated with schist, greenstone, porphyry and felspathic schist, succeeded towards the lower part of the Sound by fine grained gneiss of newer age, felstones, quartzites and clay slates.  No metallic ores were observed, but several might be expected to occur among the last mentioned group of strata, if a locality were found to have been traversed by fissures in which vein-stone could form.”

Hector had earlier that year explored an overland route to the West Coast.  He provisioned in January 1863 in Oamaru, laying in three dozen boxes of sardines, vinegar, mustard, curry and sauces as well as 3 bars of soap, five pounds of tobacco and a case of Geneva [genever, a spirit distilled from a mash of grains and flavoured with juniper berries – the original “Dutch courage” drink.]”

On this trip, John Buchanan took his share of the supplies, and camped in the Matukituki Valley for four months to botanise in the beech forest in the lower Matukituki Valley and the open tops of the mountains above the valley.  Useful research for his 1865 New Zealand Exhibition essay “A Sketch of the Botany of Otago” was undertaken, and he prepared a vegetation map of the area.  On 2 March 1863, while climbing the 2339 metre peak Mt Alta, near Wanaka Buchanan discovered a lovely flowering plant at an altitude of 6000 feet (1828.8 metres). 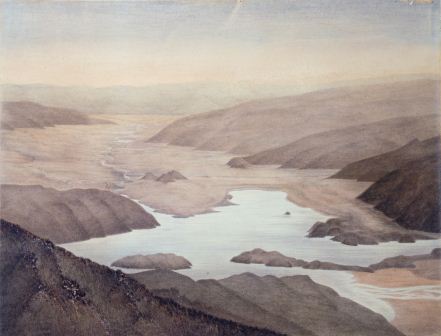 After three glorious summer months spent roaming in the mountains above Lake Wanaka as well as exploring the Matukituki Valley, Lindis Pass and Waitaki Valley, Buchanan packaged up his findings, and sent them off to Joseph Dalton Hooker at Kew.  Buchanan lists this material as “328 species of which 110 are alpines from above an altitude of 3000 feet, the highest  7500 feet”.  Hooker rewarded Buchanan’s diligence by naming the Mt Alta plant Ranunculus buchanani in his honour.

Buchanan also painted a one-third life-sized version of a magnificent flowering specimen of Ranunculus lyalli, the Mount Cook lily.  This plant had been described in its non-flowering state by Hooker, and named for its discoverer, David Lyall (1817-1895), surgeon and naturalist on the HMS Acheron.  Hooker described it in Flora Novae-Zelandiae as “…the monarch of all buttercups…the only known species with peltate leaves, the “water-lily” of the New Zealand shepherds.” 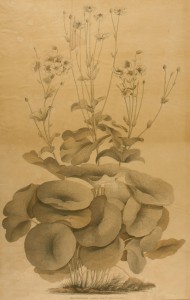 Buchanan was one of many plantsmen to supply Kew with material from the colonies, and how this was treated is the subject of a lecture by science historian Jim Endersby from Sussex University, who will give the provocatively titled talk “Imperial Science: the invention of New Zealand’s plants” at the  Hutton Theatre, Otago Museum on Thursday 29th November at 5.30pm.An exhibition of John Buchanan’s work will be on display in the Hocken Library Gallery from 22 November to 9 February 2013.  Linda Tyler will give a floortalk in the exhibition at 10am on Saturday 1 December 2012.