To commemorate the end of Dunedin Pride Month 2022 I thought it was fitting to highlight some of our LGBTQ+ holdings here at the Hocken and discuss past and present issues surrounding collection and availability of such archival materials.

At the Hocken Archives we hold an extensive collection of 37 boxes filled with
the donations of (or in the name of) Yoka Neuman – a prominent figure in the feminist,
lesbian, and human rights circles in New Zealand before her passing at age 93 last November. The majority of this collection references the Lesbian Mothers Defence Fund (LMDF) which she founded in 1979 and led until 1992. There are also numerous items relating to feminist movements, the Homosexual Law Reform Bill 1986, and other social issues of the time. Alongside the LMDF, Yoka also helped set up Te Whare Pounamu Women’s Refuge Dunedin, Rape Crisis Dunedin, and the Women’s Resource centre, was a leading volunteer at ‘Daybreak’ the first women’s bookshop in New Zealand, attended the 2019 climate action march in Dunedin, and marched in solidarity with the nurses’ strike in June 2021.

Through my internship I have been working to appraise and catalogue a new donation
to the Neuman, Yoka : Papers collection. This blog post will mainly centre on the items of this new donation. There are many items within this collection I could touch on, but for the sake of keeping this post concise I will just present a few of the highlights. 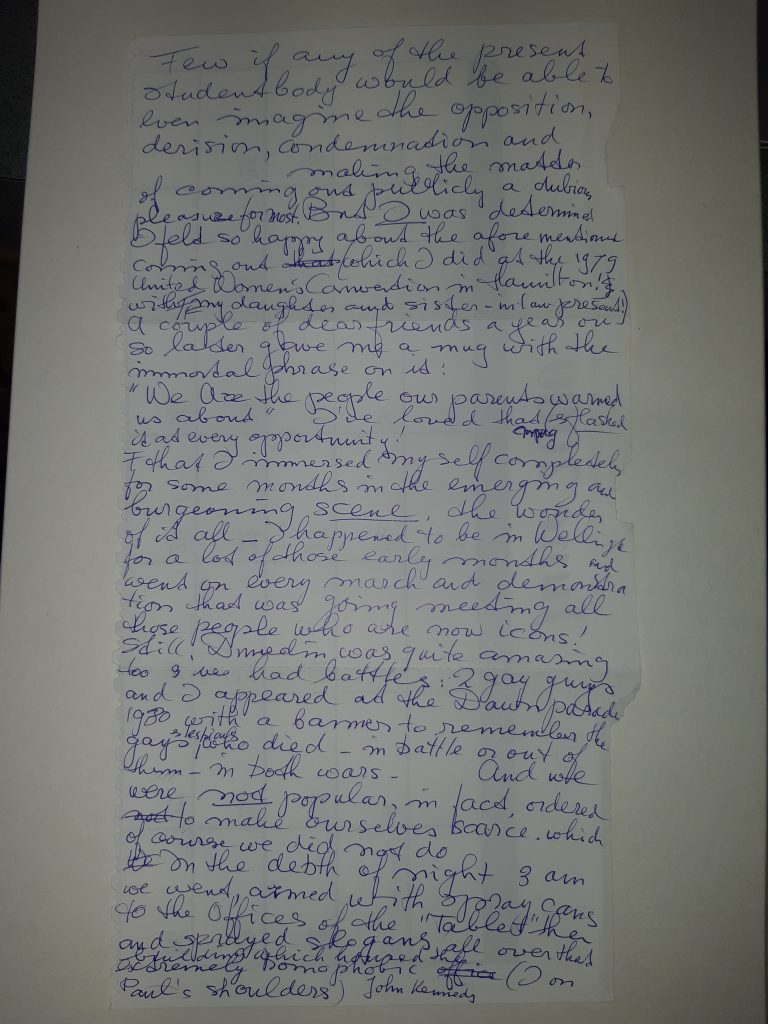 On the back of a June 2000 calendar page is a handwritten note written by Yoka
Neuman. While the note is brief, it details some of her personal experiences after coming out in the late 1970s compared to contemporary experiences of coming out. An item such as this is crucial in the sense that LGBT+ identities in New Zealand history are more politicised than humanised. Only recently have academic works begun to appear in which LGBT+ lives have been analysed as lives rather than political topics (see the works of Chris Brickell for example). Although the note has not yet been made available for viewing at the Hocken it will be listed as item MS-5159/046 in the near future.

In this note Yoka speaks on changing attitudes towards coming out publicly, with
particular reference to how “the present student body” could not imagine the “opposition, division, condemnation” as well as “dubious pleasure” which came along with her experience of coming out in the late 1970s. This note presents, at the very least, a change of public and private opinions on coming out. Coming out is no longer widely seen as a condemnable offence – at least by law or the larger part of society in New Zealand – as indicated by the recent banning of conversion therapy passed by parliament earlier this year.

Another item of interest in the new donation was a box of cassette tapes – in particular
one labelled “Yoka N/Leah to Jenny R.” (MS-5159/076). On this tape, we are able to hear Yoka speak about the “flash in the pan” nature of the establishment of the LMDF, running the LMDF on her own 5 years after it was established, and successful and unsuccessful cases of custody for lesbian mothers. Notably, in this tape Yoka describes the formation of the LMDF as a retaliation to a Families Need Fathers representative arguing on radio that children should not be able to be brought up in homosexual households under the Guardianship Amendment Bill 1979. Yoka explained she was so frustrated by the broadcast that she immediately typed up a submission to counter it, signed in the name of the National Gay Rights Coalition to give it more credibility. While researching for this submission, she stumbled across the LMDF in Canada and decided to set up a similar organisation in New Zealand.

So why is it so important to hold items such as these in archives? Put simply,
representation of traditionally marginalised communities in archives is crucial to the
preservation of the history of that community. According to Franklin Robinson in ‘Queering the Archive’ – “unless we leave behind a full range of primary documentation in publicly accessible archives and libraries from which LGBTQ history can be written, the history will not be written, or not written accurately and in context.” That is, selection, arrangement, preservation, and accessibility of archival collections are intrinsically linked with the collective process of remembrance or forgetting of communal histories. By not actively engaging with traditionally marginalised communities and without the inclusion of these voices in archival practice, systematic disenfranchisement of those communities is created. LGBTQ sources are frequently inaccessible to the wider public. Lack of relevant donations to a particular archive is an issue which the archivist is frequently challenged by – many archives rely heavily on donations sourced from the community, but oftentimes people do not realise the historical significance of the items they have.

Unlike the general papers, articles, books, and newsletters which were already a part
of the Neuman, Yoka : Papers collection at the Hocken, the more atypical, unique items such as the handwritten note and tape recording make it possible to reconstruct connections, thought processes, opinions held in a time very different from now; a time which, as Yoka pointed out in her note, many people have never experienced and could not imagine. Slowly, with additions of items such as these that are more than just factual, the past becomes illustrated from the point of view of someone who was there, coloured by their emotions and motivations.