Currently there is world-wide interest in the song “Soon May The Wellerman Come”. Social media is simply heaving with shanty mania. There is of course a Dunedin connection and a recent article in the Otago Daily Times explains the history of the Weller Brothers shore whaling station at Ōtākou and a little bit of background on the origin of the song. https://www.odt.co.nz/news/dunedin/wellerman-sea-shanty-global-hit

The song includes the line “And bring us sugar and tea and rum,” referring to essential treats distributed regularly to the whaling gangs employed by the Weller Brothers. This reminded me I had seen many references to sugar, tea and rum in of one of our most significant archival collections – the Octavius Harwood papers.

The Harwood papers are probably the best collection of archives still extant from a shore whaling station in New Zealand. Octavius Harwood was employed late in 1837 to run the store and oversee some of the station’s activities and he kept extensive records that were preserved by later generations of his family and eventually came to the Hocken in the 1930s with the papers of George Craig Thomson.

Octavius Harwood’s journals describe what life was like for those working in the 1830s whaling industry around Ōtākou and the Otago coastline. With our help from current HUMS 201 intern, Caitlyn Duff, I have transcribed and edited an extract from the start of Harwood’s 1838 journal.

To make the extract more readable I expanded abbreviations and corrected spelling to modern spelling and removed some capitals. I also used square brackets to annotate some terms and names in the text.

The close relationship of Māori and European working together in the settlement of Ōtākou is clear in the journal with regular reference to the work Māori did at the station and in the whale fisheries. Many whalers, including Harwood and his employer Edward Weller married local women and an extensive network of whānau was created along the Otago coast. 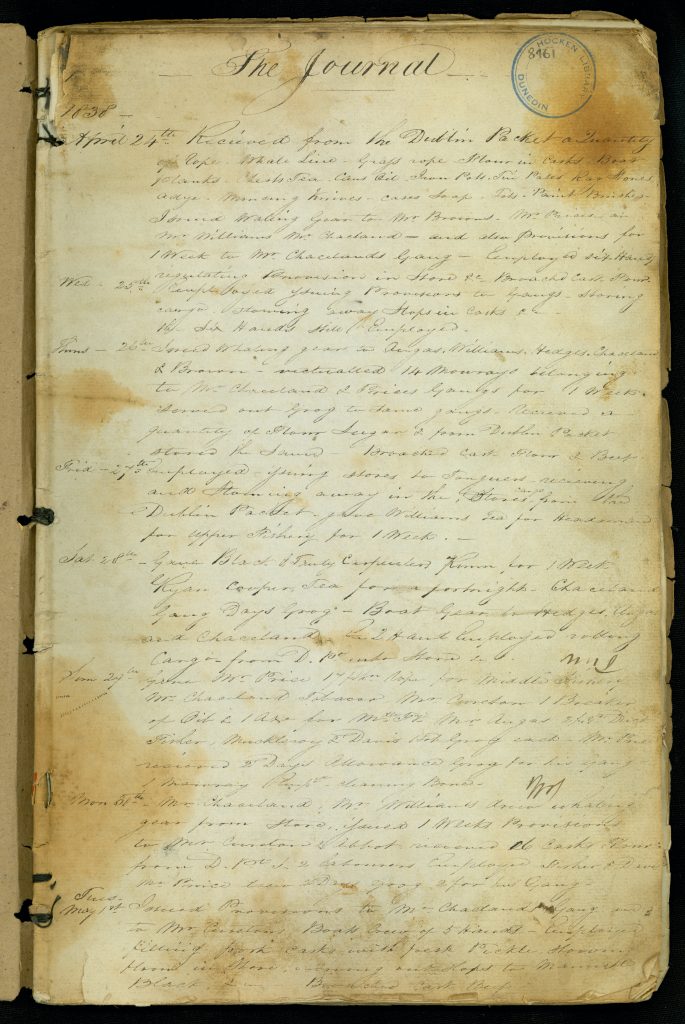 The original journal is hand sewn, probably by Harwood himself and bears the stains and scuffs of a hard life at the store. It is made of Downton Mill paper water marked 1834.

Harwood supplied provisions to the whaling gangs, who visited Ōtākou to pick up their supplies. The gangs picked up two or so weeks’ worth of supplies and dropped off the prepared oil and bone. On one occasion in this extract Taiaroa and Karetai delivered some supplies from Harwood’s store to the nearby Pūrākaunui whaling station.

The ship Dublin Packet was at Ōtākou at the time and Harwood spent much time unloading supplies and loading oil and bone on the ship. He also supplied a visiting French whaling ship.

Harwood supervised the cooper (barrel maker) at Ōtākou, and a team of usually six Māori who cleaned whalebone, and did other work such as building repairs, road repairs and fencing. He sometimes pickled pork in barrels and purchased potatoes from Māori.

He also issued provisions for “the House” – presumably the house where Edward Weller lived. Weller’s activities are mentioned occasionally. Edward eventually returned to live in Sydney when the business failed and further archival records of the Weller Brothers business are held at the State Library of New South Wales in Sydney, where they have been digitised and are available online. http://archival.sl.nsw.gov.au/Details/archive/110364025?_ga=2.66028653.2102099567.1611630649-263552842.1611630649

Frid. – 27th. – Employed issuing stores to Tonguers [the workers who cut up the whales] – receiving and stowing away in the stores cargo from the Dublin Packet – gave Williams tea for Headsmen for Upper Fishery for 1 week.

May 2nd. – Served out provisions to Mr. Price’s Gang of 25 White People and 7 Māoris for 1 week – slops to Davis and Hewit, Brown & O’Donnel – Provisions to Roberts. Received a quantity of whale bone from the Tonguers of Middle Fishery – filled up pork cask with pickle – gave Māoris their tobacco at the Middle Fishery for 2 weeks – to Mr. Chaceland’s Māori 1 week’s tobacco – Broached 1 keg & 1 Hhd [Hogshead?] of flour 1 tierce [a tierce of pork was around 136 kg of pickled pork] pork – Shipped 6 casks oil.

Wed. – 9th. – 6 bone cleaners employed – Grog to Do [ditto] and Chaceland’s gang. Issued provisions to coopers and carpenters and 1 piece beef to House. Shipped oil on board schooner Dublin Packet. Blacked tanks and rolled 1 up into yard to keep bone in. Broached cask beef.

Fri. – 18th. 6 Māoris employed making a fence between the beach and Cooper’s Workshop with the Whales Head Bones – Making foxes to tie up bone with – Issued grog to Chaceland’s gang – coopers, carpenters and Māoris. Drew off twenty two gallons spirits for Captain Wells.

Sun. – 27th. – Sent three Māoris back to Mr Brown who had run away from Pūrākaunui – Māoris employed fetching grass for cooper’s house and fence – grog to gang, &c.

Tues. – 29th. – Issued provisions to Price’s & Chaceland’s Gangs – to 6 Māori labourers – Māoris employed cleaning up bone – Quin once of Mr Price’s gang fell from a cliff and killed himself.

Thurs. – 31st – Had the honour of being threatened by Mr Angas that he would smash my bloody head – cautioned him against so doing – and told him if he did not succeed I should not make a light business of it – 6 Māoris employed as yesterday – sent provisions from Dublin Packet to Pūrākaunui – Grog to gangs, &c.

Sun. –  3rd – 5 Māoris employed cleaning bone – Issued provisions to House – Tea to Mr Williams and Hedges. Slops to Fowler and Chaceland – Mr Weller out shooting and dined on board the Dublin Packet.

Thurs. – 7th. – Māoris employed cleaning bone – sent three Māoris away in boat to Hobart town fishery with Lowe to bring up plank for to make a trough for lie [lye] – to clean bone in. Engaged a cooper of the name – John Clarke – to make casks at the rate of 20/- per ton on labour at the rate of £6 per month.

Sat. – 9th – Māoris employed clearing bone – shipped a Frenchman from the ship “La Fawn” of the name Victor Hobé  – Issued provisions to the same and to John Clarke (Cooper) Tea to Mr Williams and Hedges – Carpenter made trough for bone – Issued tobacco to Roberts – Williams, &c.

In preparing this blog I consulted the following sources on Harwood family history, the Wellers, Ōtākou and whaling:

West, Jonathon, The Face of Nature : An Environmental History of the Otago Peninsula, Otago University Press, 2017

This entry was posted in Archives and manuscripts, Business history, Popular culture, Resources, Ships and shipping by Anna Blackman. Bookmark the permalink.