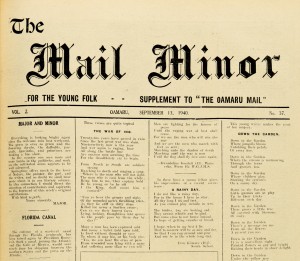 The Mail Minor is not your ordinary children’s publication, while it contains plenty of jokes and puzzles like you would expect, it also touches on current events occuring in Oamaru and throughout the world during that period. The back page of each issue has a special feature on a different topic which include titles like: “Well known dogs of the day”, “The centenary of the Bicycle”, “The Romance of Rubber” and “What’s in a Peanut”.

Major converses with children like adults in his editorials and doesn’t shy away from discussing the harsh reality of what children have to face during war time. WWII updates are scattered throughout, and some of the special features such as: “How Warships are Classified” and “The Swastika Through the Ages” seek to further children’s knowledge about the war. Major encourages children to help out the war effort in any way that they can. He suggests that boys could assist the war effort by joining a scheme to help on farms and girls could knit for the armed forces (v.2:no.49 1940 December 6).

Major welcomes children’s contributions  to The Mail Minor, these original contributions are excellent and showcase what it was like for a child to live in southern New Zealand during WWII. In v.2:no.37 (1940 September  13) Gwendoline Goodall ( 11 years of age) shares her poem. Here is the first verse:

Twenty-two years have passed in vain

Since the last great war was slain

Nineteen-forty now is the year

And war again is raging, hear

All along the battle line

Are anxious men awaiting the time

For the bloodthirsty cry to begin

The Mail Minor was not just enjoyed by the children of Oamaru. In v.3:no.33 (1941 August 15) Major writes: ”It was a pleasure to hear from Egypt this week that several Oamaru soldiers were greatly interested in the Minor containing the South School page. No fewer than ten of them were members of the school band featured in that issue.”

In v.4:no.30 (1942 July 24) the final issue, Major leaves his devoted readers a heartfelt farewell along with a photograph of the man himself. “Young and old read the Minor- public men have quoted it. Schools in both the North and South Islands have used it in their classroom, and writers and authors have expressed their admiration of it’s appeal and lay-out. It was my gift to the Oamaru Mail and to you – I enjoyed it, they enjoyed it and you enjoyed it.” 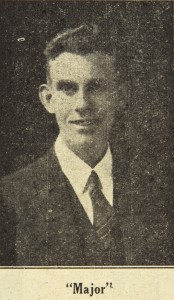