Llewellyn Beaumont was raised in Dunedin and served in both WW1 (in artillery units at Gallipoli and the Western Front in France) and WW2 (commanding coastal artillery at Taiaroa Heads). As a civilian Llewellyn worked in the wool industry, starting out as a wool classer and eventually working for David Reid and Co. as head of the wool department.

In 2002 Llewellyn’s son Matheson Beaumont donated several items relating to his father to the Hocken Collections.

I recently had the pleasure of meeting with Matheson at a community day recently held at Otago Boys High School. The day was organised as part of the filming of a television documentary series called “Tony Robinson’s Tour of Duty” about the experiences of New Zealanders and Australians during war time. My role was simply to safely transport two items from the Hocken Collections and back again. 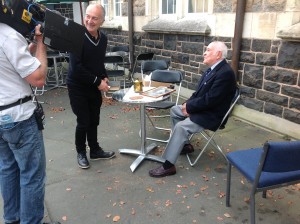 At the community day Matheson was interviewed by NZ historian Damien Fenton, and by Tony Robinson himself about the items – a postcard written on a piece of wood from Gallipoli and a piece of “trench art” – a tobacco jar made from brass bullets and shell cases in France and dedicated to Llewellyn’s father, Captain Norman Beaumont back home in NZ. 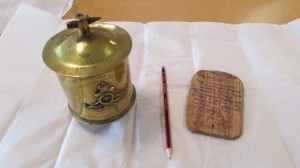 Both items are evocative of the wartime – the postcard on wood sent from Gallipoli because they couldn’t get paper to write on. The tobacco jar is more decorative and includes bullets representing several nationalities, including German, and a NZ artillery badge.

The postcard is addressed to Llewellyn’s sister, Con[stance] and has a positive tone although obviously he was making do with whatever he could find. Given that we know life for NZ soldiers at Gallipoli was hard perhaps he was being positive to save his family worry.

Paper scarcer than ever.

Received news-papers but no letters lately. Paper appreciated very much.

Receiving very little news of what is going on.

Fondest love to all. Your afect[affecionate] brother

This entry was posted in Acquisitions, ANZAC Day, Archives and manuscripts, World War I by Anna Blackman. Bookmark the permalink.