Kaleidoscope World: 40 Years of Flying Nun in Dunedin explores the Flying Nun scene in Dunedin – from the early origins with The Enemy through to the contemporary local music scene which looks beyond Flying Nun. The exhibition pulls material from across the Hocken’s rich collections as well as some iconic and visually arresting loans from people central to the music scene, while also featuring a commissioned artwork by Robert Scott (The Clean, The Bats). This blog post highlights three works featured in the exhibition.

The central exhibition image is the collage of a one-eyed cherub holding a record, created by Ian Dalziel for the tenth anniversary of Flying Nun Records in 1991. Dalziel used the collage for the commemorative card set, taking original images of a cherub, hair, and an eyeball from the 1978 Harters Picture Archive for Collage and Illustration, compiled by Jim Harter, and the image of a record from a magazine ad. The collage was again used on a 1991 New Year’s Eve Flying Nun gig poster at Christchurch’s Dux de Luxe, this time adding solar and lunar elements designed by Alec Bathgate (The Enemy, Toy Love, Tall Dwarfs). The cherub has become an iconic image associated with Flying Nun – it was used to heavily promote the label’s 25th anniversary and has more recently been re-imagined as a t-shirt motif. 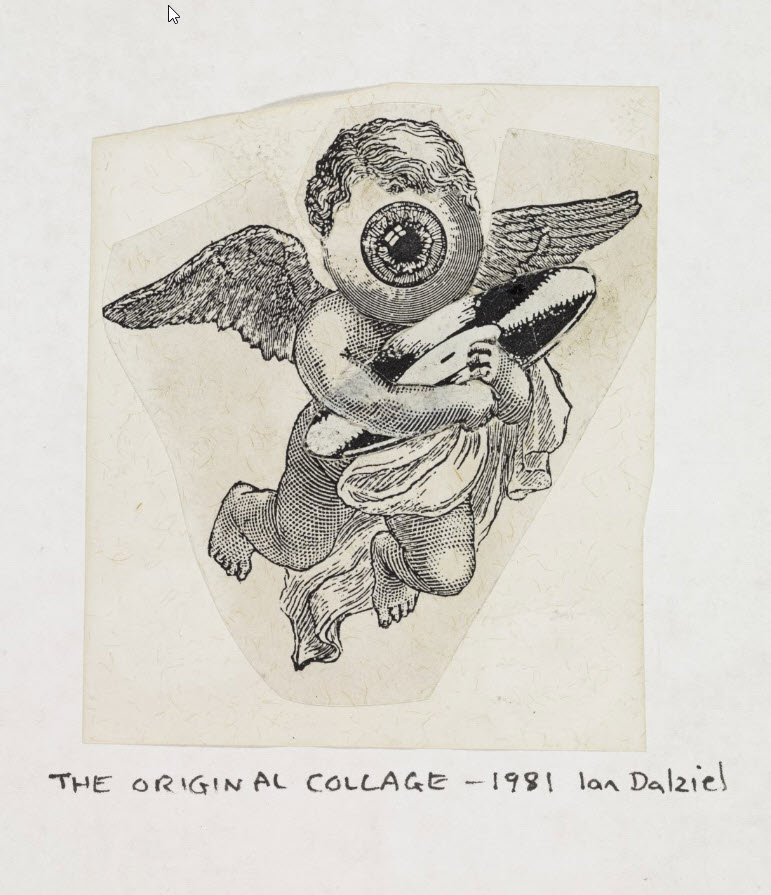 Ian Dalziel, (b.1957), The Original Collage, 1991, collage and ink on paper, 135 x 135mm, Hocken Collections Uare Taoka o Hākena, University of Otago, V2015.14.1. Given by Warwick Eade, 2015. Part of the artwork Commissioned for Flying Nun Records, on the occasion of their 10th anniversary. Permission to use kindly granted by Ian Dalziel and Flying Nun Records.

Conceived by Stephen Hall-Jones, Social Activities Manager for the Otago University Students’ Association, and strikingly brought to life on a poster by artist Robert Scott, ‘mutant hillbillies’ was a memorable and successful 1990 Orientation theme. With his friend Michael Tull, Hall-Jones introduced the full story in a calendar where each page depicted a hillbilly family member. (The Hocken would be very grateful for a donation of this calendar should anyone have one spare.) The poster advertised a 12-night programme of events described by Critic as ‘…a veritable feast for those people who are into New Zealand music’. Robert Scott was not only the poster artist that year, but he also performed as a member of two of the drawcard bands: The Clean and The Bats. 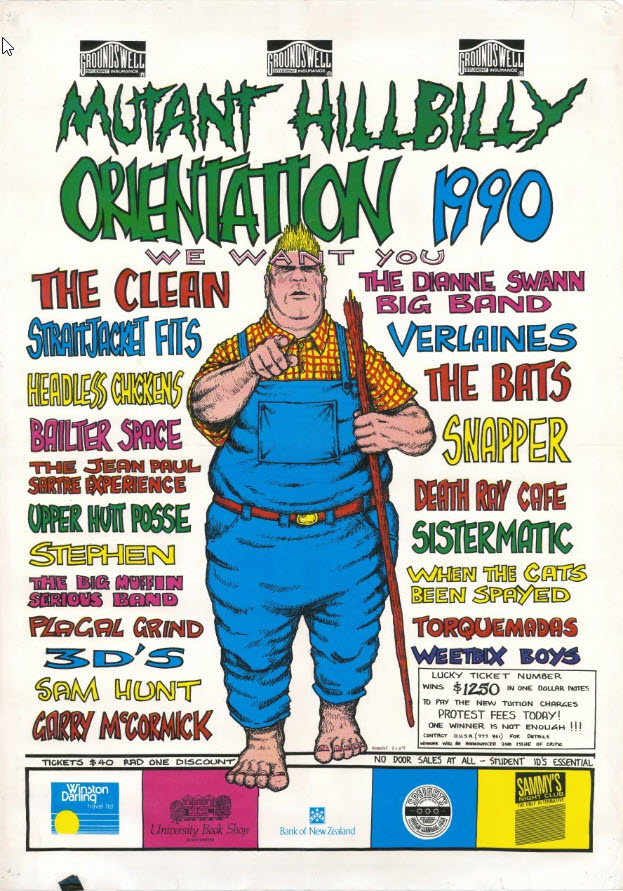 For Flying Nun’s 15th anniversary in 1996, the label commissioned five musicians signed to the label (who were also visual artists) to create a limited-edition artwork, an etching on a 7” vinyl disc with an accompanying label on the reverse side of the disc. These discs featured no music and were designed purely as collectable promotional items. There was no specific brief, and each artist – Alec Bathgate, Chris Knox, Sean O’Reilly, David Mitchell, and Hamish Kilgour – created an etching from their imaginations, which were quirky, abstract, or lurid. Alec Bathgate created a whimsical illustration, a guitar playing figure seemingly hovering over volcanos, with the Auckland cityscape behind it. Bathgate remembers there being nothing meaningful in the illustration, as he recalls “I was just asked to contribute something and came up with that!” 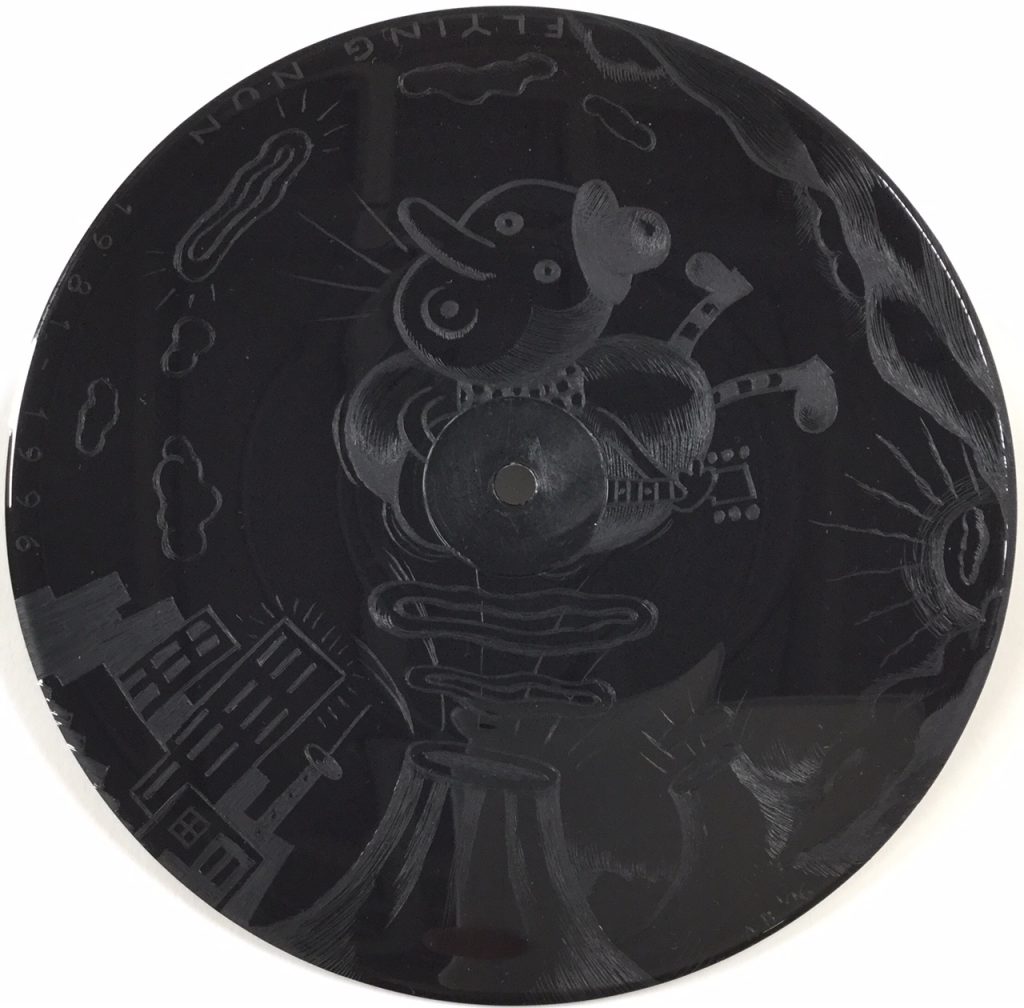 This entry was posted in Ephemera and posters, Exhibitions and events, Music, Popular culture by Hocken Collections. Bookmark the permalink.

One thought on “Kaleidoscope World”