Every year when World Audiovisual Heritage day comes around, we are always struck with the wonderful, intriguing recordings that are made available for the public to hear a little bit of a forgotten past. This year, to celebrate World AV Heritage Day at Hocken, we are looking back to the very early days of recording, and focussing on one New Zealander in particular – John Prouse, and his 1905 recording of Maiden of Morven (Gramophone and Typewriter Company 3-2359 ). This recording is one of the first recordings of a New Zealand artist, after the extremely rare Violets by Thomas Mandeno Jackson. Hocken Collections’ copy of Maiden of Morven is also thought to be the only copy that survives, although others may exist in private collections.

John Prouse was born in Wellington in 1856, the fourth of Richard and Janet Prouse’s twelve children (sadly, three died in infancy). Richard Prouse was an early settler to the Wellington region, arriving at age ten on the Duke of Roxburgh. Prouse senior established a sawmill business in Wainuiomata (later moving to Silverstream), before retiring to Wellington in the late 1880s until his death in 1894.  Two of Richard and Janet’s sons (James and Richard) established Prouse Brothers Sawmills in Levin, and a joinery factory and timber yard in Wellington. John, however, did not enter the family business. From his youth he possessed an excellent singing voice, and was a member of the Taita and Wainui church choirs (where the Prouse family lived). His public debut on the Wellington stage came in 1885, at age 29, and his career bloomed from then. He won much praise for his performance of Mendelssohn’s Elijah and Handel’s Israel in Egypt during the 1888 New Zealand Festival of Music in Wellington. In the early 1890s, Prouse, wife Lena, and their four children left for England, where he studied with Wilheim Ganz and T. A. Wallworth at Guildhall in London. Prouse also studied with Sir Charles Santley, who helped launch his professional career with engagements at The Crystal Palace, and The Royal Albert, and St. James’ halls in London (Main, 1990, p. 27). Prouse returned to New Zealand in 1892, joining the family timber business, and managing sales in Wellington, but also kept performing around New Zealand, including at the 1894 New Zealand Festival of Music in Wellington. He toured in 1902-1903 with visiting French soprano Antonia Dolores, before returning to England in 1903 with his family for a longer stay, where he could perform alongside some of the most well regarded vocalists in England and Europe. Violinist Jan Kubelik and pianist Wilheim Backhaus assisted Prouse in some of these performances. 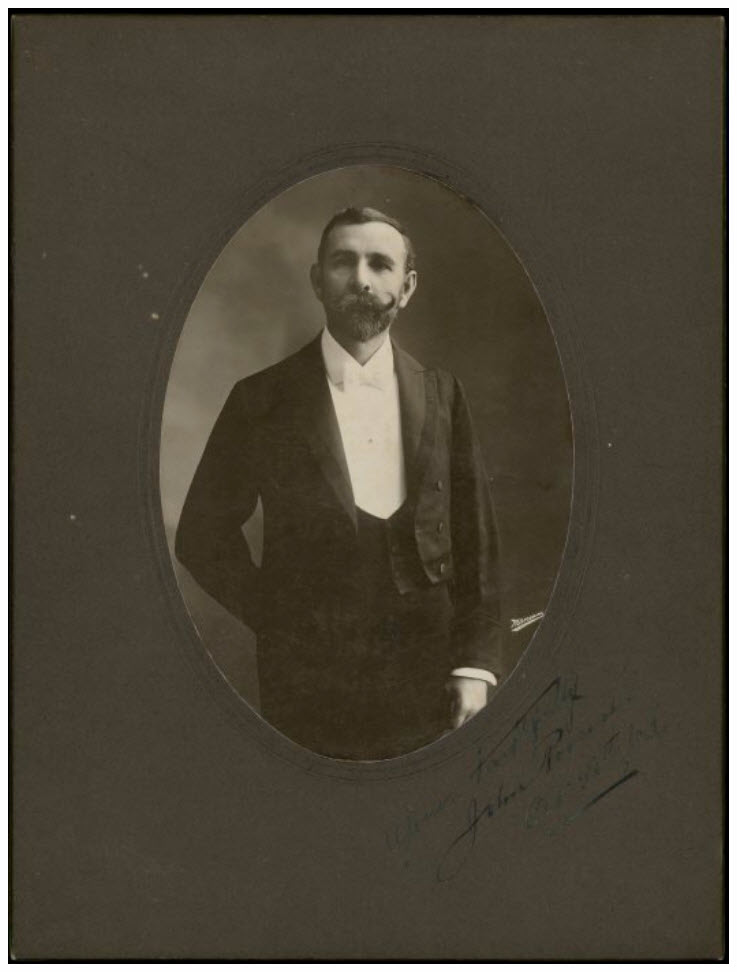 While still in London in June 1905, Prouse made twelve recordings for the Gramophone and Typewriter Company (forerunner to His Master’s Voice). William Main, in his 1990 article on Prouse, suggested that until the late 1980s it was unknown if these recordings were ever commercially released (p.27). However they were assigned catalogue numbers, so it is possible they do exist in private or institutional collections. Three of the titles Prouse recorded were test pressings with few copies known to exist: Pilgrim’s Song (composed by Tchaikovsky), There are no more like thee (composed by Temple), and Maiden of Morven (a traditional composition arranged by Malcolm Lawson).

Maiden of Morven survives at Hocken Collections, donated to us in 2002 as part of a larger collection of 78rpm discs. Maiden of Morven itself is a love lament from a bereaved Ossianic hero to his deceased love, with lyrics by Harold Boulton, and musical arrangement by Lawson. Prouse did not use Boulton’s full lyrics, cutting a third verse that refers to Ossian (the narrator and purported author of a cycle of Scottish epic poems) and his writing. The below lyrics are those sung by Prouse for his recording of Maiden of Morven.

Moan ye winds that never sleep,
Howl ye spirits of the deep,
Roar ye torrents down the steep,
Roll ye mists on Morven.
May the tempests never rest
Nor the seas with peace be blest
Since they tore thee from my breast,
Maiden of Morven!

Fairer than the flowers that grow,
Purer than the rills that flow,
Gentler than the fallow doe
‘Mid the woods of Morven;
As the leaf is to the tree,
As the summer to the bee,
So wert thou, my Love, to me,
Maiden of Morven!

Oft I chased the deer of yore,
Many a battle-brunt I bore,
When the chiefs of Innistore
Hurled their might on Morven.
Blunt my spear, and slack my bow,
Like an empty ghost I go,
Death the only hope I know,
Maiden of Morven!

The performance is of its time – formal, with clear diction and enunciation with a piano accompaniment that is, while not spartan, not overly florid, and does not overpower the vocalist. Prouse is in fine, robust form on the recording, and it is easy to understand why his performances were highly commended with his “cultured style and melodious voice”, as noted in The Kent Times, and re-reported in the Poverty Bay Herald (unknown author, 1912). Here is the 1905 recording of Maiden of Morven. 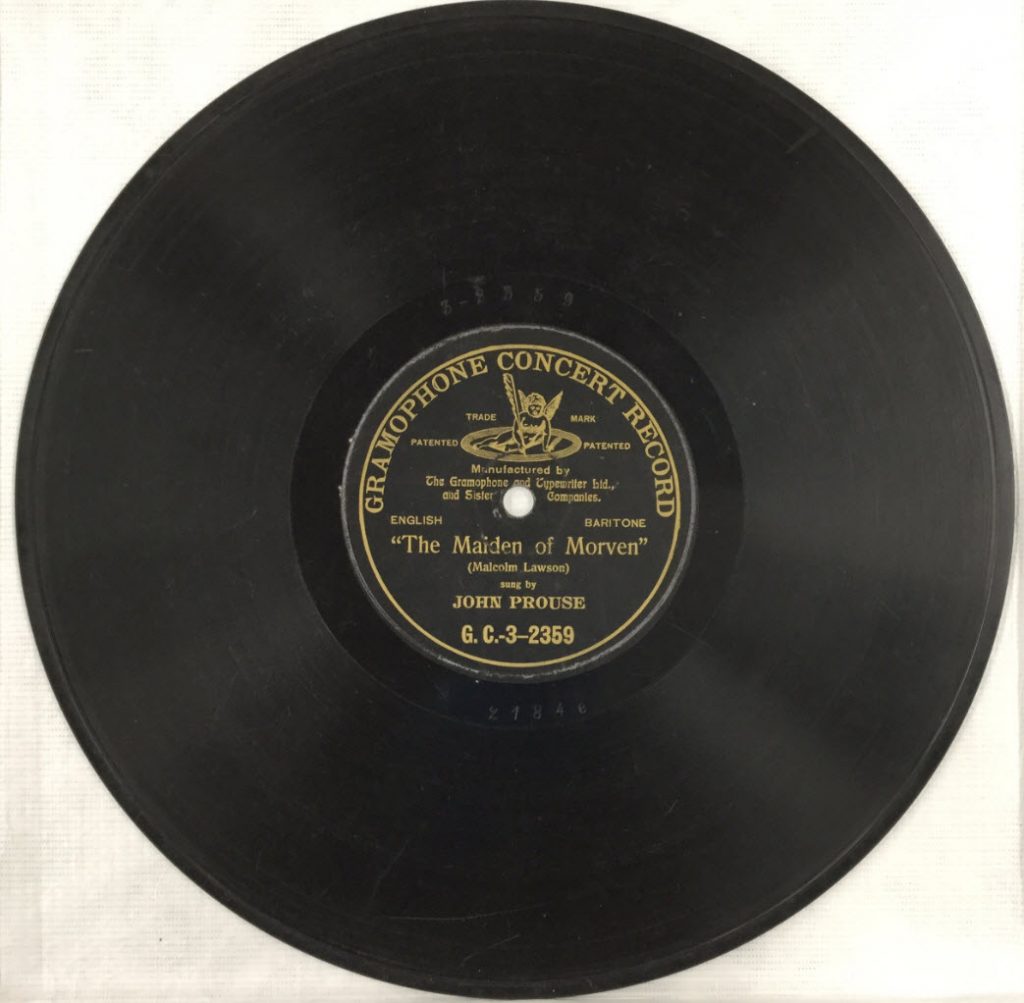 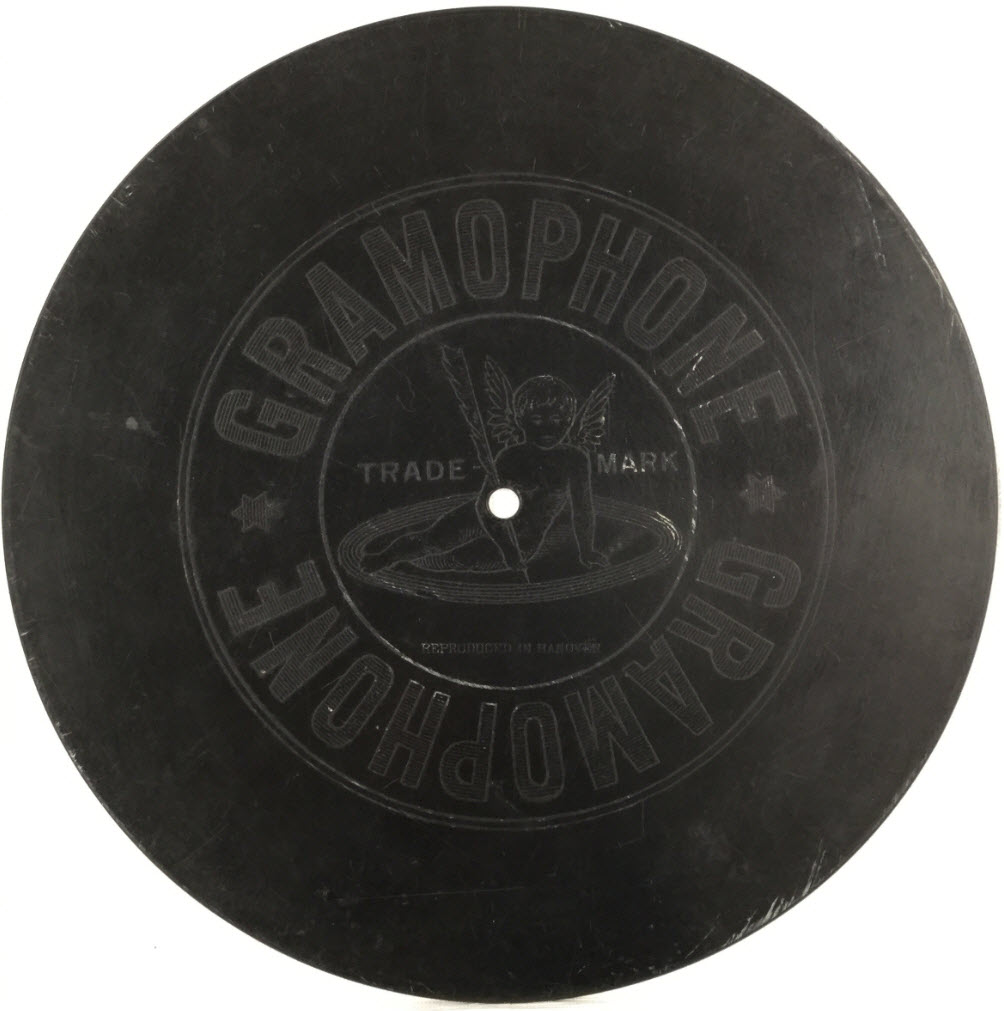 The 10”, 78rpm shellac disc is in good condition for being 114 years old. There is surface wear and minor scratching, but this is to be expected on a disc this age. The centre label is in good condition and clearly indicates the artist, title, composer, catalogue number, and the Gramophone and Company label image, but not the lyricist. The reverse side has the company name, and an etching of the label image – a cherub writing on a disc. Due to the age and fragility of the disc, we made the decision to digitise the content for preservation and access, and the original disc is no longer available for issue. By making this digital copy of the recording available for World Audiovisual Heritage Day, we are celebrating Prouse’s career and highlighting how very early recordings survive and thrive in collections.

And what of the remainder of Prouse’s career? On returning to New Zealand  later in 1905 (Wellington newspaper The Evening Post lists him performing in August) he continued to be in great demand as a vocalist, and hosted friends such as Dame Nellie Melba and Dame Clara Butt at the family home. In 1908 he performed in Rossini’s Stabat Mater, and the reviewer for The Dominion was complimentary, calling his performance “thoroughly enjoyable”, and noting his singing and enunciation of the Latin text were “beyond criticism” (unknown author, 1908).  Prouse toured again with Antonia Dolores in 1911, and continued to perform widely until his death in August 1930, including some radio broadcast recitals in April of that year. Prouse’s legacy lies in being one of the first recording artists from New Zealand – one with a particularly fine voice.

A Clerk of Oxford (2012, May 19). Thou’rt the music of my soul: Maiden of Morven [blog post]. Retrieved from https://aclerkofoxford.blogspot.com/2012/05/thourt-music-of-my-soul-maiden-of.html

This entry was posted in Entertainment, Music by Hocken Collections. Bookmark the permalink.

2 thoughts on “John Prouse and the Maiden of Morven”