This year marks one hundred years since the devastating influenza pandemic that claimed between 50 and 100 million deaths worldwide. It arrived in New Zealand not long before the armistice at the end of World War I. Soldiers returning on troopships were among those who unknowingly brought the flu here, particularly contributing to the highly infectious second wave of the virus. Influenza claimed the lives of 9,000 in New Zealand, and Māori suffered a death rate eight times that of the Pākeha population. The total was equal to about half the number of New Zealanders killed in the war, and over a period of just two months.

A striking aspect of the tragedy was the contrast between the jubilation of the armistice celebrations and the emerging horror of spreading disease and rising mortality. The armistice was declared on 11 November 1918, and widely celebrated in New Zealand on 12 November. By this time some emergency hospitals had opened, and authorities were taking steps to better treat patients and prevent the spread of the virus. The Chief Health Officer urged celebrations be postponed, and no excursion trains were allowed. Schools were closed, and large gatherings of children prohibited in the North Island. Mass celebrations were banned in Auckland, but many cities and towns celebrated with large processions, brass bands, and public speeches. These events contributed to the spread of influenza. 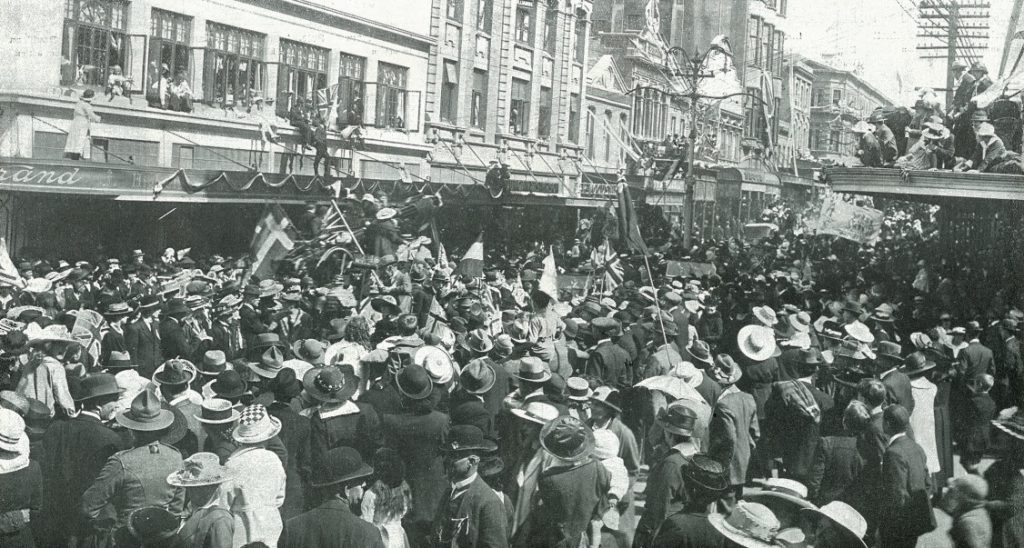 Crowds, including children, at the armistice celebrations in Princes Street, Dunedin, on 12 November 1918. This photo by Guy Morris was originally published in the Otago Witness, 20 November 1918. Hocken Collections, Uare Taoka o Hākena.

Despite a warning from District Health Officer Dr Irwin Faris, crowds thronged the streets of Dunedin. A letter in the Hocken Collections paints a vivid picture of the scene here. Nan Drennan wrote to her mother on 17 November 1918:

Well! Peace has come at last! My first thought, when I heard the bells, was, “What would I not give to be at home today”? However, that is not possible, so here goes – I think it was last Monday I finished off my letter to you & on Tuesday morning, just as we were performing our ablutions the bells & whistles began, & after that it was pandemonium. Murray went down to work in the forenoon, but came home early, & after dinner we set out in the car, with flags waving, & decorated with red white & blue rosettes. We called in on Mrs Gowland as I knew she would not be able to walk much, so she was highly delighted, & we continued down town, the streets were simply packed with people & vehicles, & a procession was going through the streets. Mrs Throp & the family were hanging out the windows of her husband’s rooms, so they waved to us to come up, which we did, & found tea being dispensed, so we all had a cup, & got an excellent view of the proceedings, then Mrs Gowland insisted on our going up there to tea, so we got into the car again, & went along Princes St. as well as we could for crowds of people, & so up the hill […] Since then, things have been real quiet, as influenza is so rampant that all the picture-houses, theatres, churches, & every place where folk gather, have been closed for a week, even the shops were shut for 3 days, to get fumigated. I expect Tuesday’s proceedings were responsible for many new cases, the crowds were so dense, but the health authorities have been very wise in taking drastic measures at once. It was perfectly dreadful in Auckland a short time ago, & a severe type, but now it is abating there. There are some bad cases here, but, as I say, the health people are wide awake. [Hocken Archives Misc-MS-1308/001]

As Nan described, further closures of places of entertainment and gathering followed the celebrations. Geoffrey Rice, in his authoritative account of the influenza pandemic’s effects in New Zealand, calculated that the peak of mortality in New Zealand was on 23 November. By December the worst was over, and the country began its recovery from the trauma of both war and disease. Large-scale peace celebrations were held in July 1919, following the signing of the Treaty of Versailles.

This entry was posted in Archives and manuscripts, Women, World War I by Hocken Collections. Bookmark the permalink.

One thought on “Influenza and the armistice celebrations of 1918”