Recently, whilst moving the posters collection from the upstairs pictorial collections stack to new cabinets downstairs, a fantastic assortment of old Hollywood film posters was rediscovered. There are just over 60 posters ranging in date from the 1931 Marx Brothers’ film “Monkey Business” to the 1954 film “Saskatchewan”. They were all donated to the Hocken Library in 1976 and had belonged to William Strong of Naseby.

William Strong papers [MS-1078], and these incorporate another set of Hollywood film posters from the 1940s and 1950s. William Strong was a watchmaker and jeweller who took over the watchmakers shop in Naseby opened by his father Robert in 1868.William was involved in a variety of local organisations, including the Naseby Cinema whose audience was likely drawn in by these enticing and colourful posters. 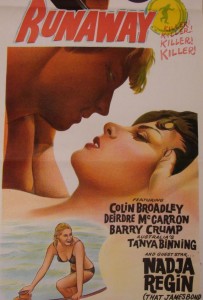 The Hocken Posters collection included a fairly limited range of New Zealand related film posters until last year when a concerted effort to improve our holdings was made. Many posters have been sourced via online auction sites. Coverage includes the 1947 film “Green Dolphin Street”, which features a destructive New Zealand earthquake, and the 1964 film “Runaway”, that starred Colin Broadley along with Barry Crump, Kiri Te Kanawa and Ray Columbus.

Please ask at the downstairs reference desk or email Katherine.Milburn@otago.ac.nz if you have any inquiries relating to the posters and ephemera collection.

2 thoughts on “Fantastic Film posters from the Forties”