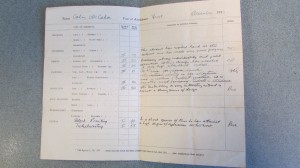 MS-1177/045 – Colin McCahon’s report from his first year at Dunedin’s King Edward Technical College Art School 1937 described him as “one of the most promising students in attendance”!

The Hocken has the honour of holding a large collection of personal and business papers of one of New Zealand’s greatest painters, Colin McCahon (1919-1987) and his wife Anne McCahon (1915-1993). They donated these papers to us some years ago, but the restriction on access has now expired, meaning researchers who visit the library can delve into this fascinating collection (one restriction does remain – access to personal letters written by people still alive requires their written permission). We’ve just finished repackaging the collection and adding it to our catalogue.

The collection dates back to Colin McCahon’s childhood, indeed earlier, as it includes papers of his mother Ethel McCahon (1888-1973), whose father William Ferrier was also a talented painter and photographer. There is a long sequence of correspondence between Colin and his parents, but most personal letters in the collection are ones received by Colin and Anne from family and friends. There are numerous letters from John and Anna Caselberg, Patricia France, Rodney Kennedy, Doris Lusk, Ron O’Reilly and Toss Woollaston, along with smaller collections (sometimes just one letter) from many other artists and writers.

There are also many ‘business’ letters in the collection. These include letters from galleries, societies and art dealers, together with other papers concerning exhibitions. There are a few papers relating to specific projects, including coloured glass work, the Urewera mural, and murals at the Otago University Library and Founders Theatre, Hamilton. Colin McCahon’s interest in theatre is reflected in items from drama productions he was involved with, including scripts and designs.

One intriguing series is publications owned by Colin McCahon. Among them are art books and various religious texts (some of them annotated). There are also a few reproductions of art works which interested him and clippings of illustrations from magazines. 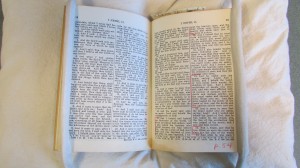 MS-4251/252 – Colin McCahon’s copy of the Book of Mormon. There are also several marked versions of the Bible in the collection.

You can view the full list of this wonderful collection on our online catalogue Hakena at: http://hakena.otago.ac.nz/scripts/mwimain.dll/144/DESCRIPTION/WEB_DESC_DET_REP/SISN%20211004?sessionsearch]

To see the full list, click on the “View Arrangement” button on the left hand side of the screen.

This entry was posted in Archives and manuscripts, Finding Aids, NZ Historical Art, Painting and Painters by Anna Blackman. Bookmark the permalink.