‘The year is 1926, and Shanghai hums to the tune of debauchery.’

In this 1920s retelling of Shakespeare’s classic Romeo and Juliet, a blood feud between two rival gangs that has been going on for generations has swept Shanghai into chaos. The Scarlets, with their newly returned heir from America, Juliette Cai, have previously been almost unchallenged for power, except by their rivals, the Russian White Flowers. But now with the various colonial powers as well as the Chinese Nationalists and Communist party all vying for control of the ancient city, the lawless power of the gangs is being threatened. And when gangsters on both sides start ripping their own throats out, their strenuous hold on power starts to slip even more as the people start whispering of a madness, and a monster in the shadows. To figure out who is behind the madness and save her people, Juliette must team up with the heir to the White Flowers, Roma Montagov- her first lover, and her first betrayal.

Welcome back to the Book Review Corner of the Hocken blog! In this post we discuss New Zealand author Chloe Gong’s New York Times Bestseller These Violent Delights, a Romeo and Juliet retelling set in 1920’s Shanghai featuring a horrible monster, political intrigue, queer characters, and a scathing takedown of colonialism. If you like Shakespeare, historical fiction and fantasy, this might be right up your alley! 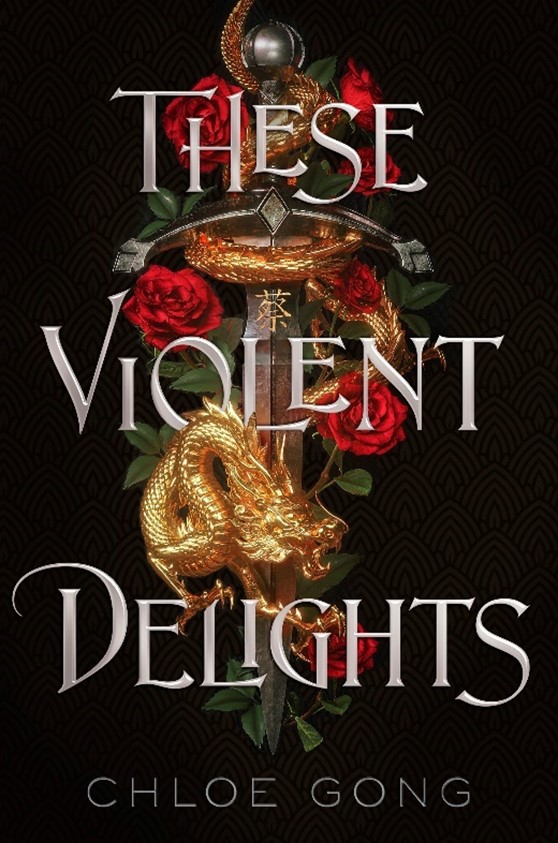 Before we get into These Violent Delights, I want to take a moment to talk about its author, Chloe Gong. She is only 23 and finished writing this book at 19. NINETEEN. When it was released in November 2020 it debuted at no.3 on the New York Times Bestseller List and was on there for over six months, which is an incredible achievement for a first novel. The sequel Our Violent Ends came out in late 2021 to equal success, and Gong already has a spinoff series in the work with the first book being released this September, and an adult fantasy series due out 2023. Born in Shanghai, Gong grew up on the North Shore but went to university in America as she knew that was where she’d want to publish. She’s been writing since she was 13, and These Violent Delights was her eighth completed manuscript. And while many might think she’s a bit young to be so successful (most young adult authors are a lot further removed from the intended age genre), I think this is in part why she’s been so successful. She knows what young adults are looking at online, how they come across content and what will make them purchase a book. Gong’s own tiktok is a great example of her own marketing- she was creating videos of makeup looks inspired by the White Flowers, sharing quotes from her novels and inspirations for these, and following viral trends. And it worked- I heard about this book from an Asian-American ‘bookstagram’ creator I follow on Instagram, and the creator sounded so genuinely excited about it that I pre-ordered my personal copy that day. This is the kind of organic work of mouth marketing that Gong was aiming for, and it has obviously aided her success.

Back to the review. I really loved this book, and thought it was a great modernisation of such a classic story. Romeo and Juliet was never my favourite Shakespeare play but Gong has really taken it in a much darker direction. In this adaptation we no longer have two very young star-crossed lovers but two bitter and jaded eighteen-year-olds whose secret love affair when they were fifteen ended in disaster and betrayal. Juliette has recently returned from America a true flapper, with beaded dresses and gelled hair to take her place as heir to the Scarlet gang empire- an empire that is under threat from foreign powers. Roma is seemingly on the verge of losing his place as heir to the White Flowers as the gap between himself and his father widens. Both are on rocky ground when a madness starts to spread through Shanghai, affecting members of both their gangs as they are infected by some sort of insect and compelled to rip their own throats out. (Warning- there are a few very gory descriptions of violence in this book.) When they run into each other as they are both separately investigating the cause of the madness, they realise it is within their best interests to work together and use both of their connections to solve the mystery. But as their families have a rival blood feud, they must do so in secret, not even telling their closest friends.

The new family and friends Gong introduces was part of what really sold this book to me. There are the obvious adaptations- Tyler for Tybalt, Marshall for Mercutio, Benedikt for Benvolio- but Gong also introduces female cousins for Juliette, to give her someone her own age and gender to confide in. These cousins, Rosalind and Kathleen are the cornerstone of Juliet’s family life and give a view of how others in her family are treated in the Scarlet gang hierarchy. Roma is also given a younger sister, Alisa- perhaps to make him slightly less impulsive and willing to sacrifice his own life. These family and friends are given their own point of view chapters as well, so we get the story not only from the sometimes very jaded views of our main couple. It is also through these characters that Gong subtlety and naturally introduces queerness into an otherwise very straight world.

When Kathleen is introduced to us, waiting tables at a Scarlet club, the indication that she is trans is so subtle I completely missed it the first time through:

Rosalind used to tell her that someone was going to snatch such a precious stone if she wore it so obviously, but Kathleen liked it there. If people were to stare at her throat, she always said she would rather it be because of the pendant than the bump of her Adam’s apple underneath.

Kathleen is never misgendered by any character, and her cousin and sister always come to her staunch defence if anyone even looks like they might insult her for being trans. But unfortunately her trans identity has not always been valid or easy. When her father finally accepts that she is trans it is only under very specific circumstances that he allows her to present as woman, and she must take on someone else’s identity, not the one she had chosen for herself. I think it can be difficult with queer characters to walk the line between overused and upsetting tropes (such as the bury your gays trope used in a lot of media, especially for lesbian characters) and acting as though their queer identity would be fully accepted, especially in a historical setting (there are absolutely settings where discrimination does not have to exist though). While Kathleen is given a tragic backstory she is also given important roles within the story by her cousin, has her own agency, and in the present text is never looked down on for her trans identity.

We also get gay representation in the form of Roma’s best friends, Benedikt and Marshall. Their relationship is very much a slow burn, and while we don’t get to see them admit their feelings for each other in this book, their POV chapters make it very clear how they feel about one another. They are extremely close and live together, but both are afraid of ruining their friendship and of the repercussions they would face from the leaders of the White Flowers if they were to come out.

Another great aspect of this adaptation is the historical setting of 1920s Shanghai. Not only do we get the glitz and glamour of the American flapper age through Juliette and her fantastic dresses and styled hair, but it is set against the very real colonisation that took place in China during this time after their loss in the Opium Wars. Juliette often makes remarks about foreigners taking parts of the city for themselves, and her family is constantly scrambling to make agreements with the Nationalists so they can still maintain a semblance of their power. Communism is spreading through the workers of the city, and historically there were thousands of strikes across Shanghai in 1926 due to the terrible wages and working conditions. The Scarlet gang is also loosely based around the Green gang, a secret society and criminal organisation prominent in the mid 20th century, and while there was no equivalent of the White Flowers, Shanghai was a free port and many Russians ended up there after fleeing from the civil war. I personally love a historical backdrop in any novel, and having this very real pressure of foreigners, Nationalists and Communists all fighting for the city is an integral part of the story.

Overall, this is a great book and I would really recommend it if you enjoy modern Shakespeare, the enemies to lovers trope, queer fiction, murder mysteries, monster hunting, and historical backdrops.

Interested in reading this? These Violent Delights is in our published collections and can be used on site in our reading room.