On Saturday, 26 May, Hocken hosted a public performance event to celebrate both Music Month, and some treasures of our sheet music collection. These are only a few of the gems in the collection, and items that deserve an airing to a contemporary audience. Some – Pokarekare, Blue Smoke, and Now is the Hour – are well known, but others, such as Bowling have been lost to time.

The published sheet music collection at Hocken is extensive at over 2,500 sheets that represent all styles and genres in New Zealand’s music history, from piano-and-vocal songs to atonal and avant-garde contemporary pieces, and all forms of popular music in-between. This collection has many treasures including some of our earliest music sheets: Te Heu Heu and Mrs St George’s Whalers of the Deep Deep Sea, which dates to c.1857; the first English edition of God Defend New Zealand from 1876; All Hail! Zealandia by Frederick Leech and Francis Valpy of 1874, and James Brown’s 1894 Tarakoi Waltz are only some of the gems tucked away. Contemporary treasures are collected too, and although these may not have a rarity factor at present, future researchers may rediscover them as unique items that deserve reappraisal.

Treasures in the collection are varied, but here are some highlighted in the Music Month performance.

George Laidlaw emigrated to New Zealand in 1901. He and his family settled in Dunedin, and within a year he was appointed conductor of the the Kaikorai Brass Band. During the First World War, Laidlaw was known for composing several popular songs, including British Boys (1915), with words by R.L. Christie, and When the Boys Come Home, with lyrics by G.A. Wycherley (1916). Bowling, written with lyrics by J.B. Mack, is less well-known. Written around 1912, the Evening Star of 3 August that year advertised it as played by the Kaikorai Brass Band at His Majesty’s Theatre on 7 August. The Evening Post on 7 April 1915, reporting on the death of lyricist J.B. Mack, described the song as having ‘achieved more than an average amount of popularity.’ The audience at our Music Month event participated in what might have been the song’s first public performance in over a century. 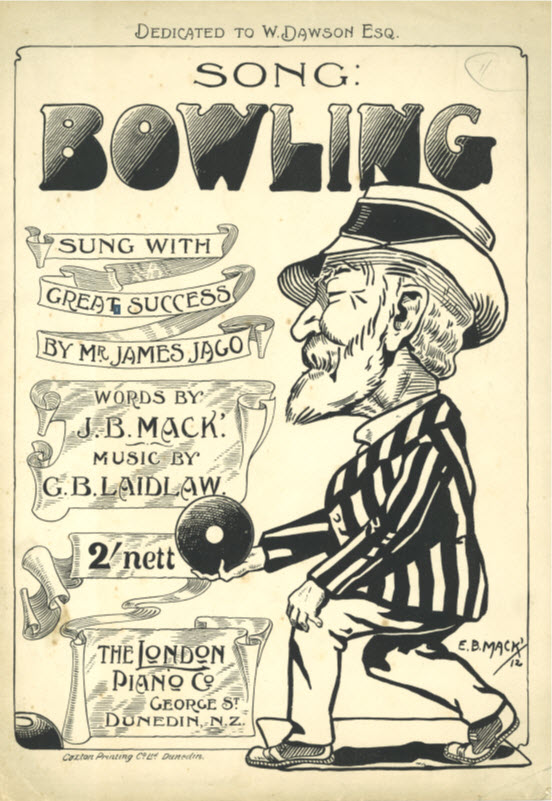 Private Anania Amohou was part of the Maori Battalion during the Second World War. He had been working on a song in his hometown of Rotorua, as part of Te Arawa’s contribution to the Centennial Exhibition, which marked 100 years since the signing of the Treaty of Waitangi. The melody was not original, taken from The Washington and Lee Swing, a University football song written in the United States in 1906. However, when Amohou’s lyrics were added, it became a New Zealand anthem, swiftly embraced by the Battalion as their own song. Published by Charles Begg and Co. in 1940, it became extremely popular, and was performed widely. On 6 November 1940, The Press reported on the song’s popularity, waxing lyrical that:

‘to have one song sung by the British Broadcasting Corporation, and by tens of thousands of people in all parts of the British Empire, emphasises a sensational “hit”, but to achieve this distinction before the song… was published is indeed one of the sensational experiences of the Music World… from one end of this country to the other, Maori Battalion Marching Song is being sung.’ 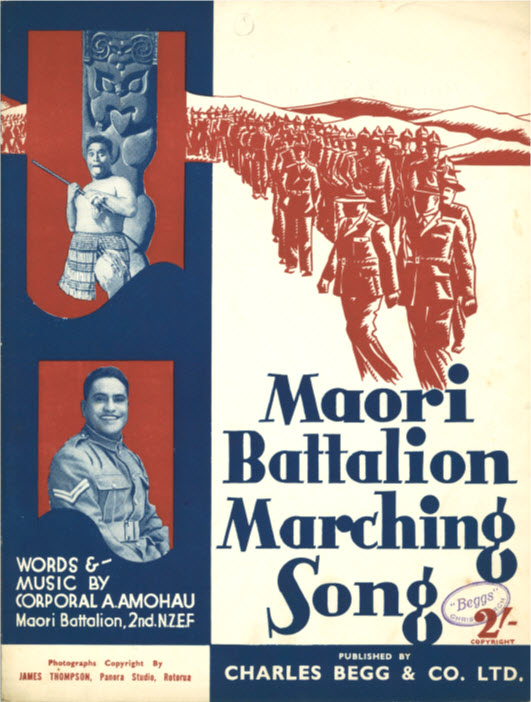 Flower of the Bush – words and music by David S. Sharp

Flower of the Bush was dedicated to Dale Austen, star of the 1928 film The Bush Cinderella, and the second Miss New Zealand. Advertised on the cover of the music sheet as a ‘N.Z. picture and a N.Z. song’, Flower of the Bush was inspired by the film, and performed at the Strand Theatre in Dunedin by the Strand Orchestra ,with arrangement by L.D. Austin. Dunedin composer David S. Sharp (or Daniel. S. Sharp as he is called here) was a prolific songwriter, with titles including Tawhaki, The Prisoner’s Return, The Fairy Tale Parade, Caring for the Rose, and Surging Seas (among others). 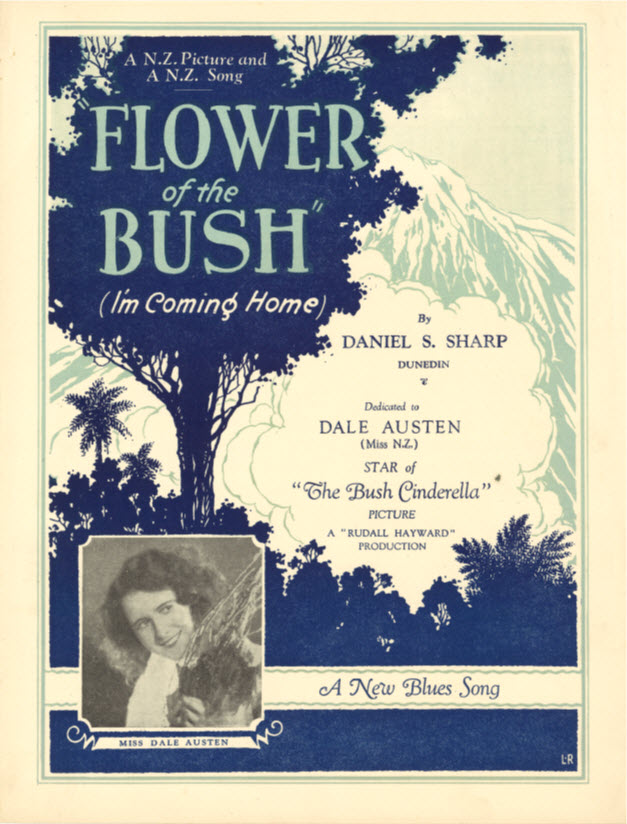 Pōkarekare Ana (originally known as Pōkarekare) and Pō Atarau were both written before the First World War, and both have almost moved into the realm of folk song, due to ‘the ease of which they have travelled, their oral transmission, and the conflicting sources for their composition” (Bourke, 2017, p.187).

Pōkarekare Ana (written c.1912) was attributed to Paraire Tomoana after his death, although he never claimed to have written the song. However, Tomoana and Sir Apirana Ngata did publish the lyrics in 1921, saying the song had originated in North of Auckland, becoming popular in the Devonport Narrow Neck Military Camp, before travelling to the East Cape (Bourke, 2017, p.187). Pōkarekare was often referred to as a ‘Maori Love Song’, and a favourite of entertainer Bathie Stuart, who performed it locally in 1918, with The Colonist (11 June 1919) reporting that she sung it ‘with characteristic expression.’  The song became popular again in the 1920s, with arrangements by Alfred Hill (illustrated below) and Hemi Piripata (James Philpott) in 1927, and again the following year, when Ana Hato recorded the song as part of her performance for the Duke and Duchess of York’s visit to the Tūnohopu Meeting House in Ohinemutu, Rotorua. Ernest McKinlay also recorded the song in Sydney in 1927. 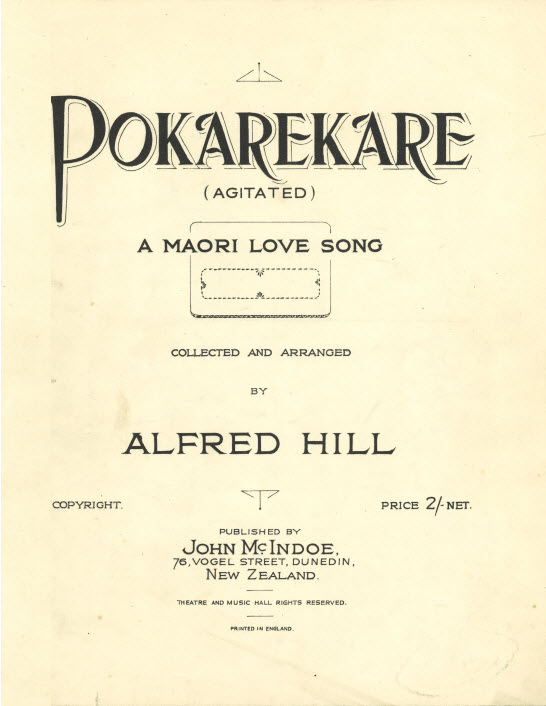 Pō Atarau (Now Is the Hour) has a similarly unclear history. Thought to have been written sometime around 1913, the melody was adjusted from an Australian instrumental called Swiss Cradle Song by Clement Scott, with lyrics (in Māori) added around 1915 and centred on a farewell theme (Bourke, 2017, p.188). In 1919, songwriter Maewa Kaihau also used Scott’s melody for her song Haere Ra (Goodbye) Waltz Song, which had a verse that began with the lyric ‘this is the hour’, and by 1935 the song was a well-known last waltz at farewells. It was frequently heard when soldiers were departing for the Second World War, and was a popular chorus during concerts in the 1930s and 1940s. The Evening Post for 11 May 1938 has Pō Atarau listed as part of the finale of the Ngati Poneke Maori Concert at the Wellington Town Hall. The song became internationally famous in 1947, when Gracie Fields recorded it under the title Now is the Hour, and again the following year when Bing Crosby recorded it, sending the song to the top of the American music charts. Below is the inner label from the Rotorua Maori Choir’s version of the song, recorded in 1930. 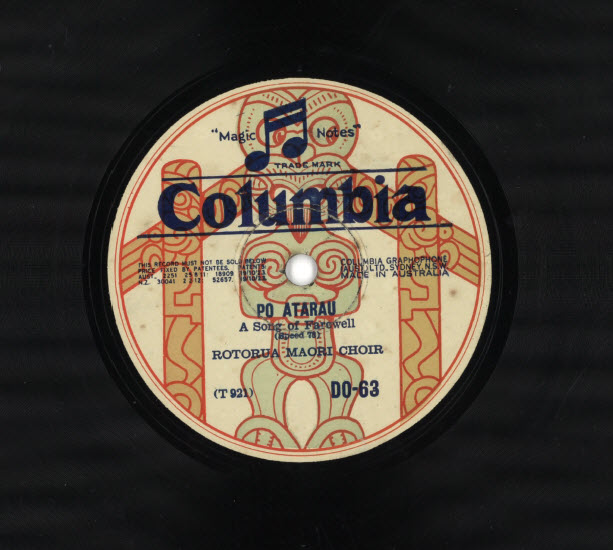 These, and other treasures of the Hocken sheet music collection, are available to view on request, as are any recordings of these songs in Hocken’s recorded music collections. Please enquire at the reference desk, or contact the Curator, Music and AV for any further information on these collections.

2 thoughts on “Between the Sheets: Gems from the Hocken sheet music collection”