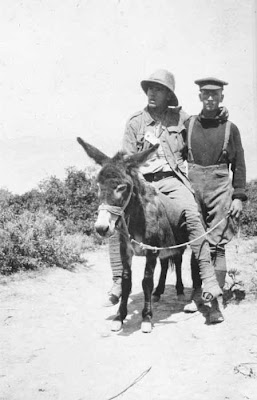 Keen World War 1 researchers may feel they recognise this image – that’s because it is a photograph of the “man with the donkey” at Gallipoli that Sapper Horace Millichamp Moore-Jones based his famous paintings on. The paintings depict Private John Simpson (his full name was John Simpson Kirkland), but the man in the photo is actually Private Richard Henderson of the New Zealand Expeditionary Force.

The photo you see is scanned from a negative which is part of a substantial collection of WW1 photographs amongst the papers of James Gardner Jackson held by the Hocken Collections. The collection also includes Jackson’s diaries and correspondence with the Australian War Memorial explaining the circumstances in which he took the picture. Jackson did actually meet Private Simpson and worked with him for about 5 days but did not take a picture of Simpson. It was only a little later that he took the picture of his colleague Private Richard Henderson. Both Jackson and Henderson were in the NZ Field Ambulance Unit at Gallipoli. In a letter to the Australian War Memorial dated 22 September 1937, Jackson states that the wounded soldier was an “Aussie” so the photo could be said to illustrate the ANZAC spirit with New Zealanders and Australians working together in appalling conditions to help each other.

Although the photo was taken in May 1915, Jackson did not see it until 1919 when he returned to NZ. In the meantime his photos had been developed by his family. The artist Moore-Jones had been discharged and had returned to NZ by 1917 and during a lecture in Dunedin on the war, illustrated with copies of his watercolours, he was asked if he had a painting of Simpson and his donkey. Moore-Jones said no he didn’t but that if he had a photograph he would make one. James Jackson’s brother supplied him with a copy of the photo the next day, Moore-Jones identified it in error as being of Simpson and produced the first painting.

As well as the negative there are several prints of the photo in the Jackson collection, curiously and somewhat tantalisingly the back of one of the prints is inscribed “Murphy, Paterson, VC Anzac, Received the Victoria Cross on 1st of June and killed on June 8th”. Well, my research indicates that one of the donkeys was called Murphy, but that sometimes Simpson was also called Murphy by some, but where “Paterson” fits in I haven’t been able to work out. Perhaps the name of the injured Australian? Perhaps just another error of identification?

Private Henderson’s personnel file is now available in digitised form from Archives NZ and you can find a digitised copy of the painting at the Australian War Memorial website. You can find out more about Moore-Jones from the NZ Dictionary of Biography.

This entry was posted in ANZAC Day, Historical photographs by Anna Blackman. Bookmark the permalink.