Every now and then a find quite unexpected and novel comes through the doors at Hocken. A small book titled Original Poetry, by Mrs C. Fulton, to which are added a few Poems by her Father Mr James Dods[1], is such a remarkable find. This modest publication has been largely forgotten by history and has a unique and special tale behind it. 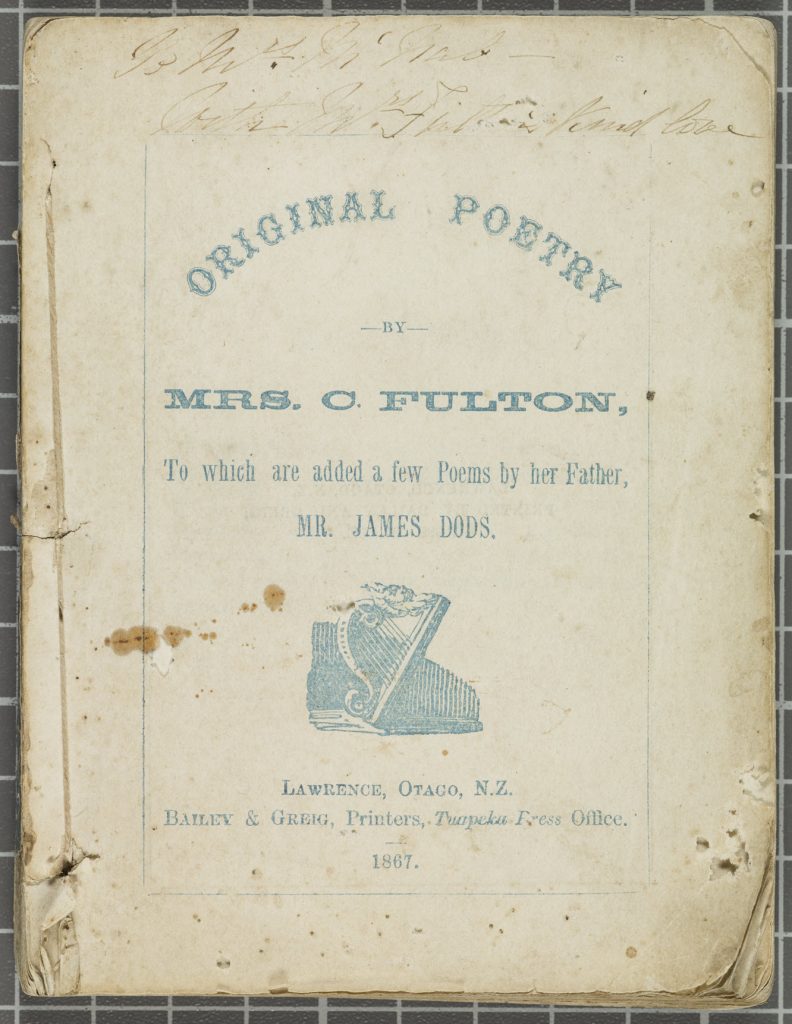 Title page Original Poetry, by Mrs C. Fulton, to which are added a few Poems by her Father Mr James Dods

Written in 1867 and published and printed in the goldfields frontier town of Lawrence, Otago, this wee gem of a volume has evaded public collections for more than 150 years. Original Poetry, by Mrs C. Fulton is not recorded in the Bagnall’s monumental New Zealand National Bibliography to the year 1960[2], nor is it mentioned in any subsequent print or electronic bibliographies. It is a lost book recovered.

Original Poetry is the first poetic offering by colonial settler poet Christina Fulton and was greeted with favorable reviews in national newspapers when it was published[3]. It includes poems inspired by the local environment such as Dunedin in the early part of 1863; Collision at Port Chalmers, 1863; The Clutha and Tuapeka. Fulton’s poems record her thought and experience as a woman in settler society. Some poems celebrate the natural environment and domestic life, others speak to a sense of separation from family, others still to exotic lands and people. The book is dedicated to Christina’s father, John Dods, and also includes a selection of his poetry. The following year, in 1868, Fulton published a second poetic offering Lella: a poem. It was the last book she would write. 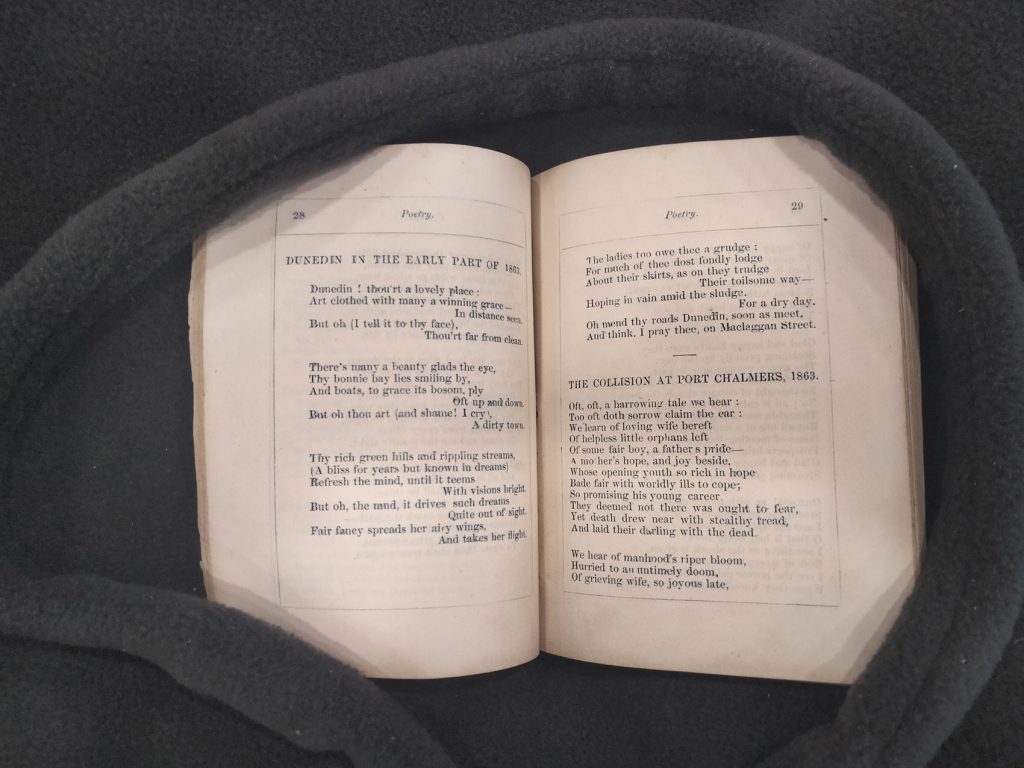 The Dunedin character, pamphleteer, and politician J.G.S. Grant recounts in his Dunedin newspaper the Saturday Review the tale of how Christina Fulton’s Original poetry came to be published:

“The history of this little volume of 131 pages is a romantic episode in literature. About seven months ago we made a tour of Otago, and among other places, we paid a visit to Blue Spur. It was a very wet morning when, in company with Mr. Greig, Tuapeka ‘Press,’ we started from Lawrence, and proceeded, via Wetherstone’s village, along the ranges of the Blue Spur. After inspecting the sluicing operations at the head of Gabriel’s Gully …we entered a pretty little cottage, and being perfectly saturated with wet, warmed and dried ourselves over against a roaring fire, and partook of an elegant repast, hospitably spread out before us by the polite lady of the cottage. She — having learned our name from the gentlemen accompanying us — brought out from her desk a beautiful album, and modestly requested us to favour her with our opinion of the merits of sundry poems therein elegantly engrossed. On opening the album before the cheerful fire, after having refreshed our languishing frame with the good things of this life, our spirits began to revive, and we forgot that we were in the midst of a waste howling desert, and began to scan the verses of the manuscript. After a pause of meditation, we closed the book, gave it to the lady, and inly exclaiming “Eureka ! Eureka !” like the ancient sage, importuned our fair hostess to hand it over to Mr. Greig for publication. Reluctantly, on the strength of our commendation she assented, and so we, accompanied by Mr. Greig, retraced our steps to Lawrence…”[4]

Christina Dods was born in Edinburgh in 1838 to James Dods and Helen Sinclair. She and the family migrated to Melbourne in 1853 and soon moved to the goldfields of Bendigo. In 1856 Christina married Robert Gammell Fulton. Christina and Robert were lured to Otago by the promise of gold and settled at Blur Spur, Otago. By 1868 the Fulton’s cottage at Blue Spur had been virtually sluiced out from under them. This, coupled with the bitter southern winters led to the Fultons move to Fiji that year. The Fultons sailed on the ‘Banshee’ on 20 September 1868 and established a plantation at Valaga in Savu Bay on Vanua Levu, together with Christina’s father, mother and brothers. Christina was only to live another six years, by 1874 she had passed away, a victim of the insalubrious Fijian climate. Christina and Robert had no children together.

Original Poetry, by Mrs C. Fulton, to which are added a few Poems by her Father Mr James Dods was generously donated to the Hocken Collections by the great-great-grandson of Mrs Catherine McNab, the Rev. Michael Wallace, in April 2021. It is the only known extant copy and bears a dedication on the title page to Mrs McNab from Mrs Fulton. Flowers and leaves have been pressed between the book’s pages. Thanks to Rowan Gibbs for his excellent research and article ‘Christina Fulton, 1838-1874’[5].

Original Poetry, by Mrs C. Fulton is available to be viewed at Hocken Collections. 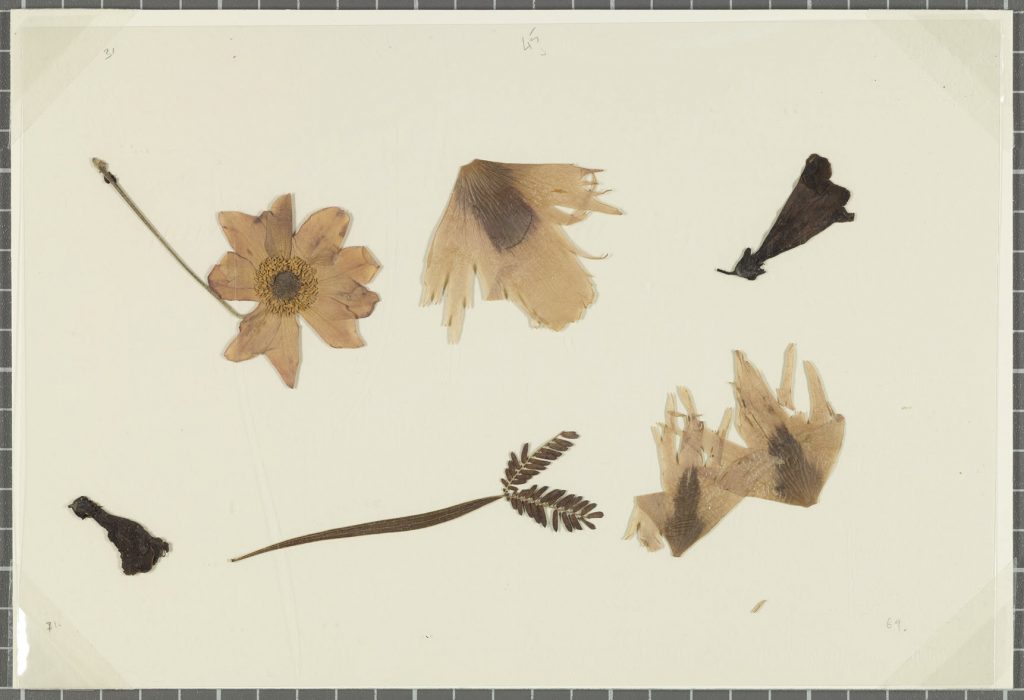 Pressed flowers associated with the Hocken copy of Original Poetry

This entry was posted in Acquisitions, Books, Poets and Poetry, Printing and publishing by Hocken Collections. Bookmark the permalink.