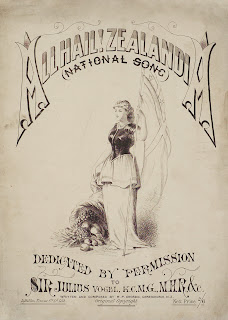 Zealandia was a familiar symbol to New Zealanders of the late nineteenth and early twentieth centuries. Akin to Great Britain’s Britannia and America’s Columbia, she personified New Zealand in poetry, song, and political cartoons, and even appeared on postage stamps and household goods. Her statue surmounts the Boer War memorial at Palmerston.

The depiction of Zealandia on the cover of the song ‘All Hail! Zealandia!’ emphasises the colony’s youth and agricultural wealth (which apparently extended to the production of pineapples!). She carries the United Tribes flag, selected as New Zealand’s first official ensign in 1834. Replaced by the Union Flag in 1840, it became an important symbol of Māori independence and resistance to Crown-perpetuated injustice. It also retained some currency as a patriotic symbol, appearing on this sheet music more than forty years after it fell from official use.

The first verse of the song proclaims:

Queen of the Southern Isles

On whose bright destiny

Echo from shore to shore

The music was composed by Robert Peel Crosbie, a Railways Department employee and enthusiastic amateur musician from Christchurch. Francis Hopkins Valpy is sometimes credited with the words, but Crosbie claimed to have written them with Valpy’s assistance. The first performance took place at Lyttelton in 1871 or 1872, several years before the composition of ‘God Defend New Zealand’. This makes ‘All Hail! Zealandia!’ one of New Zealand’s earliest national songs.

An alternative setting by Dunedin music teacher Frederick Leech was published in 1874, and widely performed during the following 20 or 30 years. Crosbie’s original but less known version was eventually published in 1885 with a dedication to former premier Sir Julius Vogel. A reviewer at the time described the work as a stirring song of ‘eminently national type’ and suggested that it should become immensely popular.

The piece was ‘uncommonly well printed’ by the Lyttelton Times Company, although there is a spelling mistake on the cover for those who care to look for it!

All Hail! Zealandia! Words and music by R.P. Crosbie 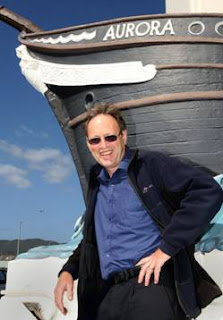 Constructing a past: Hocken and the memorialising
of history
Tuesday 16 November, 5.30pm, followed by refreshments

The theme of this year’s Hocken Lecture will be drawn from Jock Phillips’ thinking about Hocken and his generation of history-makers. He says “Dr Hocken was a leading member of the first generation of Pakeha New Zealanders who set out to construct a past for New Zealand. He did so partly through his writing but more importantly through his collecting. At the same time there was another way of preserving memories of the past. New Zealanders began to put up memorials, statues and monuments throughout the country to make permanent the memory of significant people and historical events. In this lecture I want to explore briefly the history that Hocken sought to preserve and then to compare this with the history memorialised in stone in New Zealand in 1880-1914”. This is a theme that resonates with the Library’s celebration of its centenary of service to scholarship and documenting life in Aotearoa New Zealand.