Ka aru tātou i te aha? What are we pursuing, what is the outcome?

Where: R3S10 (on third floor of Te Tumu, University of Otago)

Has the development of the Ngāi Tahu policy framework created a new identity?

Since 1998, Ngāi Tahu has grown demographically, in size and structure. Marae and kāinga have been significantly made-over. The iwi is well known as a successful tribe and business. Tahu Pōtiki has been integrally involved within his iwi, hapū and whānau for his lifetime. In this seminar he will discuss how the Ngāi Tahu policy framework has created a new identity. He will critique key policy initiatives that he was fundamental in instigating.

Te Tumu’s Research Blog will be posting occasional profiles of our academic staff, highlighting their research interests and publication. 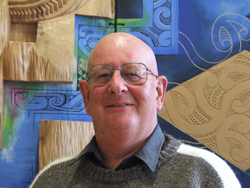 Jim is a Senior Lecturer and has been with Te Tumu since 1992.

* Resource management including mahika kai, and comparisons with other Indigenous peoples.

Jim is currently exploring the dynamics of oral transmission of traditional stories, with a view to publishing a book, which will examine the extent to which Māori families pass on Māui stories, compared with Navajo and their stories about Mai’I (coyote – the trickster that predominates amongst Native Americans). A secondary theme will be looking at Europeans attitudes to those stories.

Jim is most interested in talking to prospective students about comparison of traditional ways with the views of contemporary Māori.

Anne-Marie Jackson, “The Taiapure Process and to What Extent it Needs to be Altered to Achieve Tangata Whenua Objectives”, 2009 – 2011

(2014) “Food and the Maori” in Encyclopaedia of the History of Science, Technology and Medicine in Non-Western Cultures, Springer, Dordrecht

Please feel free to call in or make contact with Jim to discuss supervision.