It is always gratifying to see proactive student research within Te Tumu papers, and Semester 1 2016 has been no exception.

This is the second year that students in MAOR202 (Māori and Tikanga)  conducted research with the objective of developing tikanga-informed solutions to reduce alcohol harm. The students acted as consultants to the New Zealand Police who came to them at the beginning of the semester and explained the complex problem of alcohol. The students then spent the semester learning about the useful nature of tikanga and the research process. This culminated in 8 groups projects which ranged from a mobile phone app that promoted connectedness and collective responsibility to reduce sexual assaults to a camp that fostered a sense of belonging and self for at risk foster youth. The projects all worked towards preventative, strengths-based, proactive solutions. They presented their projects to representatives of the New Zealand Police at a small symposium hosted at Te Tumu, and in more detail in their written research reports.  Suzanne Duncan teaches MAOR202.

The above conversation with one group highlighted for them early on in the semester how important research was in creating an historically accurate composition, particularly given the theme they had chosen for their performance – an insight into Ngāi Tahu/Ōtākou Māori history.

MAOR 308 was offered for the first time this year. The aim of the paper was to give students the opportunity to work in groups to compose, choreograph and teach each other a haka, waiata or poi. Given the theme, and the fact that only two of the students whakapapa to Ngāi Tahu, the need for the students to research local histories was made clear very early on. Not only did the narrative of their compositions have to be correct but also the reo, the costumes and the choreography. I did not have much to teach them in terms of performance skills – they are all highly proficient performers – but what I could help develop was their research and language skills in this area. 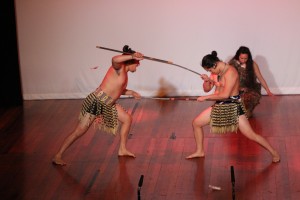 MAOR308 students performing their own compositions.

Haka and waiata is how these students know how to best express themselves and because they were responsible for each item they were more invested in the performance than if they were simply performing something someone else had written for them. The results speak for themselves and the excitement they have created within the community of the potential of Māori performing arts to extend beyond the typical ‘bracket’ performance will have long-lasting effects.  Dr Karyn Paringatai teaches MAOR308.

An account of the MAOR308 performance (and also that of MAOR108 students) can also be found at the Otago Connection. 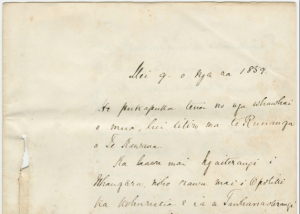 The Hocken Collections is a magnificent cultural treasury and part of the university’s library system.  Within its collections are a number of untranslated Māori-language manuscripts that many researchers are unable to read.  MAOR427 (He Tuhituhinga) is a paper in which students read and analyse Māori-language historical texts, with all discussion and assessment done i roto i te reo Māori.  One of the mahi was to transcribe and translate a 1859 14-sheet letter written by Te Rūnanga o Awataha to the Governor concerning Māori history in Bay of Plenty.  The students were able to give their work back to the Hocken as a resource for future researchers.  Assoc Prof Lachy Paterson teaches MAOR427.