Te Tumu graduand in the news

Posted on December 17, 2016 by Lachlan Paterson

Matani Schaaf is featured in the Otago Daily Times [click here] on his PhD journey. It’s a lovely story on both Matani and his son Marckis who graduate today.

Posted on December 5, 2016 by Lachlan Paterson

Te Tumu congratulates our postgraduate students who are graduating this December. 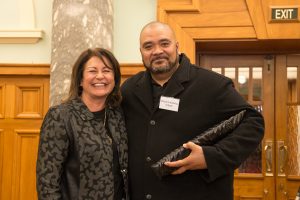 This thesis examined the participation motivation among professional Pasifiki rugby players. Dominated by Western theories and models, rugby participation research has overlooked the inclusion of a theory or model that is significant to Pasifiki peoples. This research identified what cultural factors exist, that motivate so many Pasifiki peoples to play rugby.  This research also highlighted a mismatch between the lived realities of Pasifiki rugby players’ experiences of motivation and burnout, compared to the lived realities of Palāngi rugby players. The most notable outcome, was that Pasifiki rugby players’ experiences were dramatically intensified, by familial, cultural, spiritual and financial obligations; which manifested in burnout, mental illness, substance abuse, binge drinking and failed attempts at suicide.