John Birnie submitted the “hard copies” of his PhD thesis today at the Graduate Research School.

John has been a fixture at Te Tumu, graduating with his MIndS in 2012.  Te reo Māori is one of John’s passions.  He was a former high school teacher of te reo, and completed higher level reo classes at Te Tumu. His PhD, “Exploring learner-centredness for adults learning te reo Māori: easing the path to language acquisition” combines his interests in education and Māori-language learning.

John was supervised by Prof. Poia Rewi and Assoc Prof. Lachy Paterson, and by Dr Matiu Rātima in the early stages of his study.  Submitting the hard bound copies is the final act in the PhD journey – with the exception of his graduation in May.  Koia kei a koe, e Hone!

Posted on September 22, 2016 by Lachlan Paterson 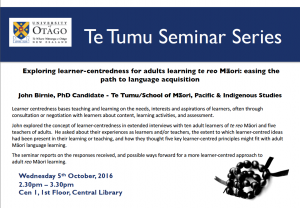