“Thank you so much for your lovely cheery letter. My family which is large all took turns in reading it. Although we are lonesome for our two marine sons Walter and Richard, we are consoled to know that such lovely people like yourself and Tom Hickey (Richards friend) do cheer them up.”
So begins a 1943 letter from Emily Shulich, Chicago, to Betty Manley of Lower Hutt. Betty served as a hostess at the American Red Cross’s Cecil Club, providing hospitality to the large influx of American servicemen in New Zealand. She kept up a correspondence with several of the men she met there, along with some of their families, who were grateful for contact with friends of sons who seldom wrote themselves. The letters she received form a substantial part of the papers of the Watson and Manley families (ARC-0665). 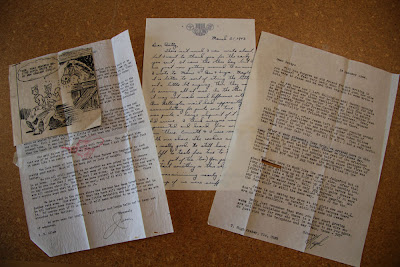 Letters from American servicemen to Betty Manley. The censor has cut out a word from Hugh Keahey’s letter, which would have revealed how many miles his camp was from the nearest large town.
The Americans were grateful for the hospitality they received in Wellington. Hugh Keahey wrote to Betty early in 1944 commenting on his sadness at leaving: “As we passed out of the harbor I raised my hand in salute and silently thanked you, the Carters, Louie, Jean (yes Jean too) sincerely for your friendship and kindnesses.” His friend Jesse Allen was less flattering about his time in Wellington: “The reason this is a good nite to write is because I am reminded that it was just a year ago today that we crawled off the boat in Gookland to spend seven dreary months. As I went out to Mudford I thought it was the most gosh awful country I ever saw. Never did change my mind much. Now how do you like that.” Allen had a lively writing style and his letters are full of teasing remarks. The servicemen clearly found Betty Manley attractive. Walter Shulich’s sister Diana wrote to Betty about three photographs her brother had shown the family: “He said the snapshots didn’t flatter you at all and that you were much better looking, although the snapshots showed you to be very pretty. (Yesiree!).”
Meanwhile, Betty Manley was also corresponding with Reg Watson, a Dunedin printer who was serving overseas with the 5th New Zealand Field Ambulance. He sent her letters, cards, telegrams (including a concerned one reading “No news of you for some time …”), postcards of “the eternal city,” textiles from Jerusalem, books and gloves. Some New Zealand women married American servicemen and started new lives in the USA, but Betty’s destiny lay in the south: in 1945 she married Reg Watson and moved to Dunedin. 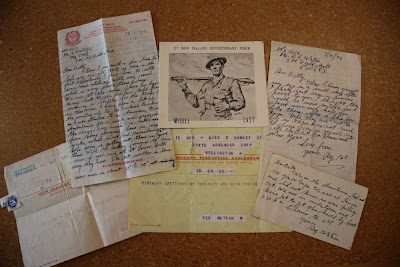 Some of the items sent by Reg Watson to Betty Manley.
Blog post prepared by Ali Clarke, Reference Assistant

This entry was posted in World War II by Anna Blackman. Bookmark the permalink.