The Hocken’s periodicals collection is home to a range of fashion-related material. Perhaps one of the most glamorous titles we hold is Vogue New Zealand – our nation’s very own edition of the famous title published from 1957 to 1968. Though New Zealand’s Vogue was short-lived, the magazine is a valuable resource for today’s readers: the preserved copies represent an important decade in New Zealand’s fashion history.

Vogue New Zealand began as an offshoot for British Vogue. Edited from the U.K., the early issues spoke of patriotism for England: New Zealand readers were encouraged to sew with British materials, and New Zealand garments were flown out of the country to be photographed in ‘proper’ English settings. Early features were mostly international and, besides advertising, there was little to indicate that the publication was intended for an antipodean audience. One exception is found in the magazine’s fashion advice, where suggestions were made about where Vogue clothing could be worn in New Zealand. The following extract details appropriate places to sport “cotton sailcloth” items by Voyageur: 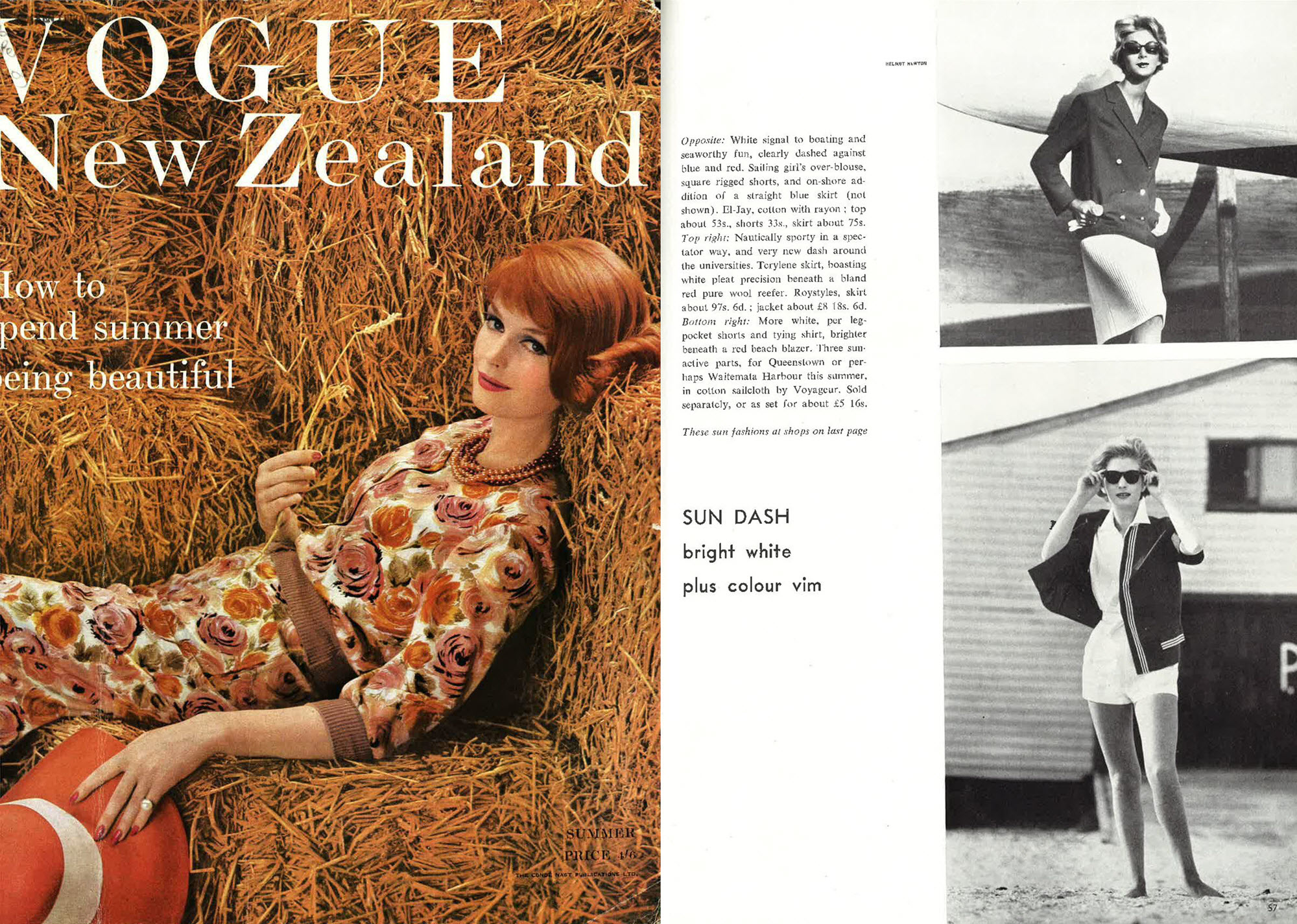 The magazine’s British accent did not silence its developing New Zealand voice however. By 1960, production of the magazine had moved from England to Australia with editor Sheila Scotter appointed to oversee Vogue New Zealand and Vogue Australia. These developments – including the coming of local editorial talent such as Michal McKay – saw the magazine’s distinctive New Zealand style begin to flourish. New Zealand photographers, fashionable New Zealand homes, elegant New Zealand women and, of course, New Zealand designers were brought to the fore. In true Kiwi style, country living and woollen garments became a heavy focus for the magazine. 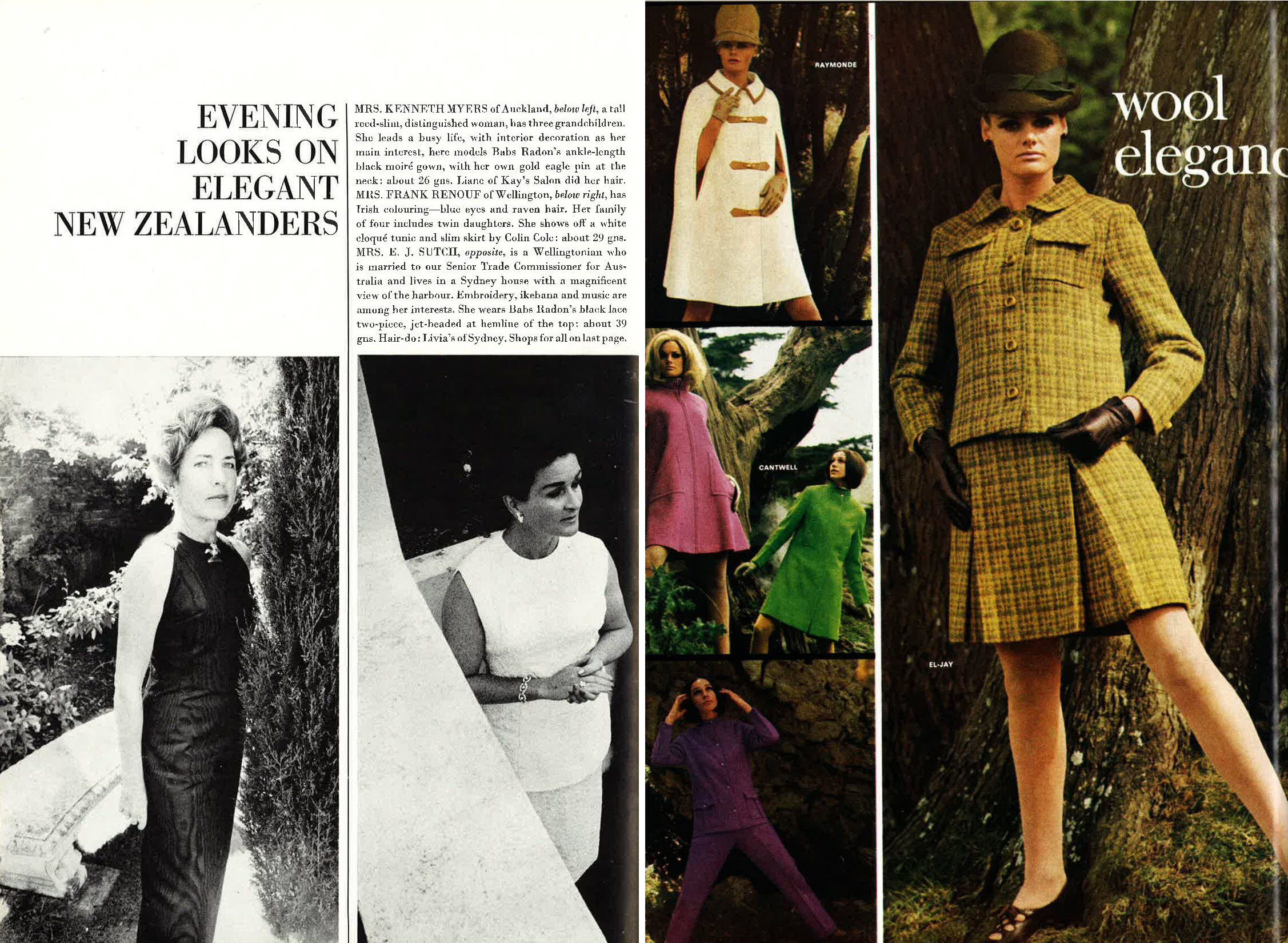 Vogue New Zealand positioned our nation as one in-touch with global trends and capable of producing high fashion garments. New Zealand designers, like Bruce Papos, or El Jay, were celebrated by the publication, inspiring confidence in local design. The local industry also benefitted from the magazine’s showcasing of the latest in European fashion. For example, the repeated feature “What goes on in other Vogues” informed readers of the styles trending in global fashion centres such as Paris or Italy. In another feature, readers were encouraged to write to the magazine and request Vogue sewing patterns. Access to these designs was not exclusive; the professional and the non-professional alike had the means to create some of the most fashionable clothes of the era.

Trending fashions were not stagnant during the magazine’s run, of course. Fashion, as we know, is subject to change, and the magazine documents some of the era’s major changes in style. For example, looks from the late fifties vary greatly to those of the sixties. Scanning the issues today, we can see that a traditional and lady-like aesthetic prevails in the fifties; however a youthful and rebellious style emerges in the sixties. This step away from tradition is echoed in Vogue New Zealand’s “Breakaways” feature from 1966, which reads:

“Who are the Breakaways? They are the girls who bolted the pack: stepped out of the mould – then smashed it to smithereens. They are the Look of today, of this generation”. (1966:Spring, page 51).

Vogue New Zealand’s decade-long run was an important time in the history of New Zealand fashion. The magazine supported New Zealand’s developing fashion industry and connected Kiwi’s with the world of couture culture. Today, the preserved copies offer a fascinating record of this time and the changing fashions within it. Like many treasures at the Hocken, Vogue New Zealand offers us a glimpse into the past and tells us a story that is unique to New Zealand’s history. We encourage those who are interested by this magazine (or related material) to visit the library and view the items first-hand. Donations from the public are also welcomed; we are always looking for material that will enrich Dr. Hocken’s ever-growing collection. 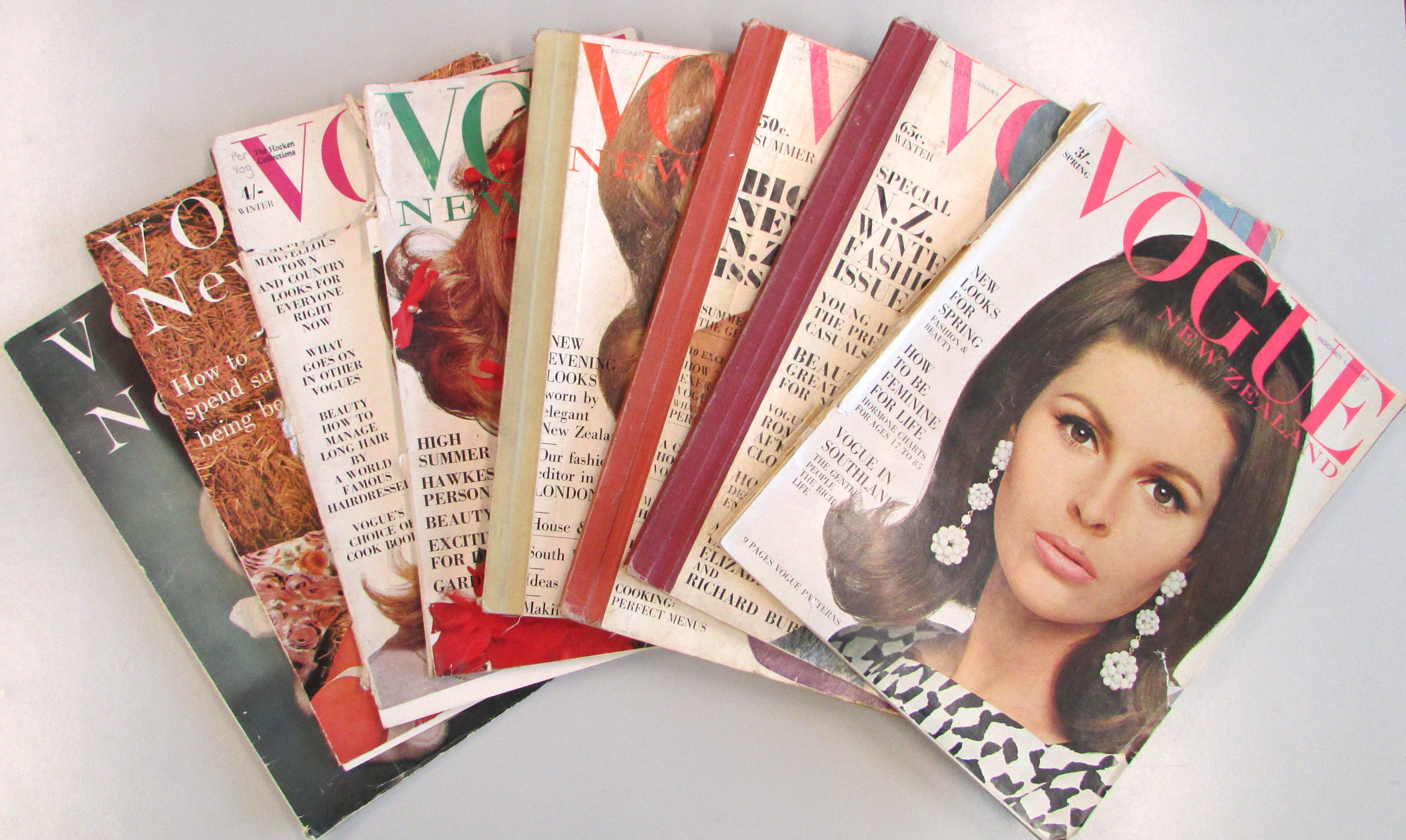 The Hocken’s collection of Vogue New Zealand to date.

This entry was posted in Magazines, journals, periodicals and newspapers, Popular culture, Printing and publishing, Women by Anna Blackman. Bookmark the permalink.

One thought on “Vogue New Zealand: A Decade of Home-Grown Glamour”