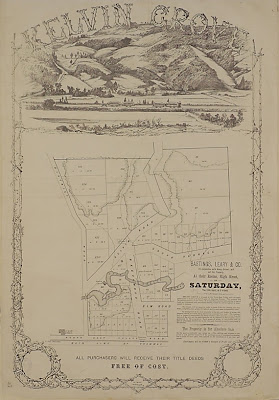 One of the most attractive sales plans in the collection and typical of its time, this black and white auction notice for the North East Valley subdivision of Kelvin Grove plays up the rustic element with heading and border of twigs and a sketch of the rural location. Why not live with nature only a few minutes’ tram ride from the city?

The land, which is on the west side of North Road, was purchased from William Henry Valpy in 1852 by James Hunter who named the area Kelvin Grove after his Scottish home north of Glasgow. By 1879 it was in the hands of local entrepreneur David Proudfoot who began a regular steam and horse drawn tram service the same year, building tramsheds and stables at the foot of the subdivision. To encourage patronage he entered tram ticket numbers in a lottery with building sections in the subdivision as prizes.

The auction plan shows existing land use, and features such as water courses, native bush, existing buildings and proposed roads. The steam and horse-drawn trams shown were replaced by electric ones in 1903.

This entry was posted in Graphic art, Maps by Anna Blackman. Bookmark the permalink.

One thought on “Subdivision map of Kelvin Grove Dunedin”