The Hocken Library has a good collection of early postcards available to researchers, as one would expect of an institution located in Dunedin – the centre of postcard production in Australasia during its postal heyday. There are approximately four thousand postcards in total housed separately in their own sequence within the Hocken Photographs Collection and digital images of about a third of these are currently available on the Hocken Snapshop website.   Hundreds more are housed within individual holdings named after their donors, as well as in albums and brief descriptions of these are given on the Hakena database, available online via the Hocken Library home page.  Countless more postcards are to be found in the Hocken Archives Collection though not collected as postcards per se and, due to the sheer mass of material and limited resources of the Library, only a mention of the format has so far generally been given on the Hakena database.

A visit to the Hocken provides an opportunity to view postcards by particular photographers alongside other examples of their work.  Bill Main chose to mention the E.A. Phillips collection of negatives, for example, in his brief description of the Hocken’s holdings in his book Wish You Were Here.[i]  The recent acquisition of Hardwicke Knight’s collection of photographs and archives currently being catalogued also contains some hundreds of postcards and looks set to bolster in particular the number of images from the Aotearoa series produced by Hugh and G.K. Neill. 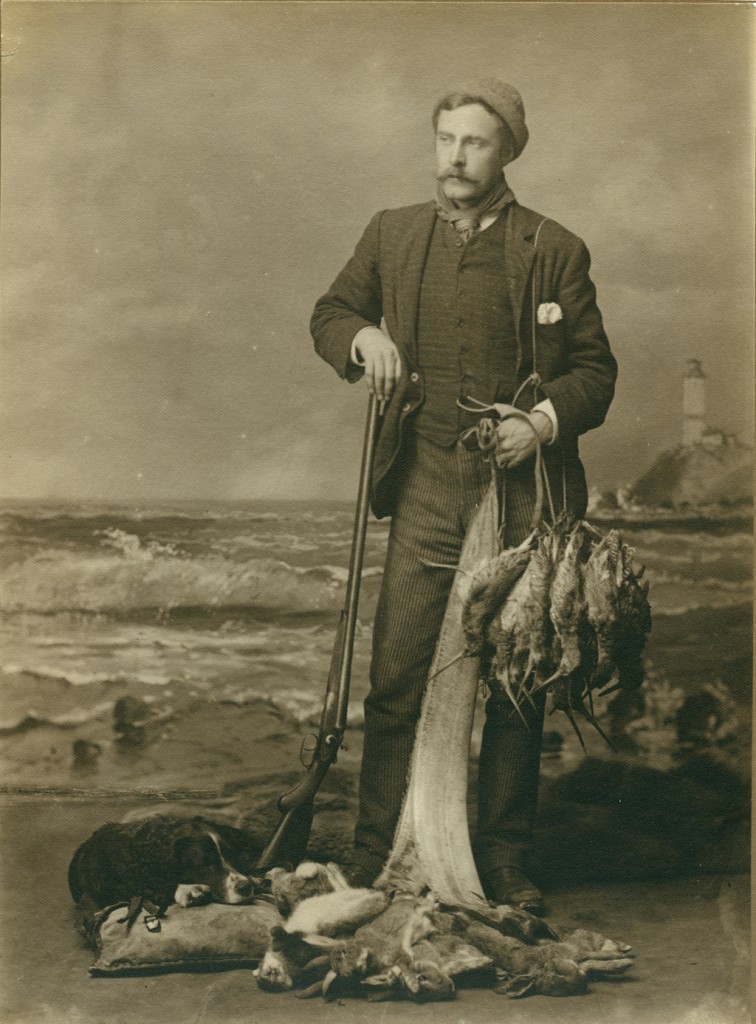 One favourite Dunedin photographer for curators at the Hocken over the years has been Guy Morris (1868-1918, see figure 1).  Guy Morris’s work was featured at an in-house exhibition in 2009, following the gift of over 100 original photographs from the estate of his eldest daughter, Marina. The show included postcards carrying his images as well as illustrated supplements from the Otago Witness newspaper which contain many published copies of Guy’s work from 1900 until his death during the flu epidemic in 1918.

Hardwicke Knight was the first to mention Guy Morris in his histories of New Zealand photography.[ii]  He explained how the Morris name was well known in Dunedin at the end of the nineteenth century as John Morris, Guy’s elder brother, headed a thriving photographic business.[iii]  John Morris (1854-1919) rose to prominence as a portrait photographer, and, in competition with the Burton Brothers, his prints of Dunedin streets also proved popular, possibly as Hardwicke Knight noted, because he included so much life.  Guy and another brother, Hugh, began as John’s apprentices and then ran branches of the firm around the city before Guy struck out on his own in 1900, trading under his first name.[iv]

Bill Main has published a couple of articles specifically about Guy Morris’s postcards in Postcard Pillar in 2007 and 2011, well-illustrated with examples of his colour and real photo cards.  A useful list of cards in Bill’s private collection reveals how Guy’s images appeared in a number of different series and though mainly devoted to the Dunedin and Otago region, he also photographed other corners of New Zealand. [v] The Hocken holds cards by Guy of places as far south as Stewart Island and north to Bluff Hill in Napier.   Bill Main focused on Guy’s work as a press photographer, putting him on a par with Joseph Zachariah and S.C Smith in Wellington and F.N. Jones in Nelson, and noted  how  his street scenes were ‘refreshingly different’ for the choice of subject matter in people going about their business and the manner in which they were taken  ‘with Dunedin’s trams playing a very important part in his ordered compositions’. [vi]  Another aspect of this is that his subjects can often be matched and dated accurately with photographs in the Otago Witness.  We can therefore know that his ‘Naseby Snow Series’ was a record of a heavy fall in July 1908, for example. 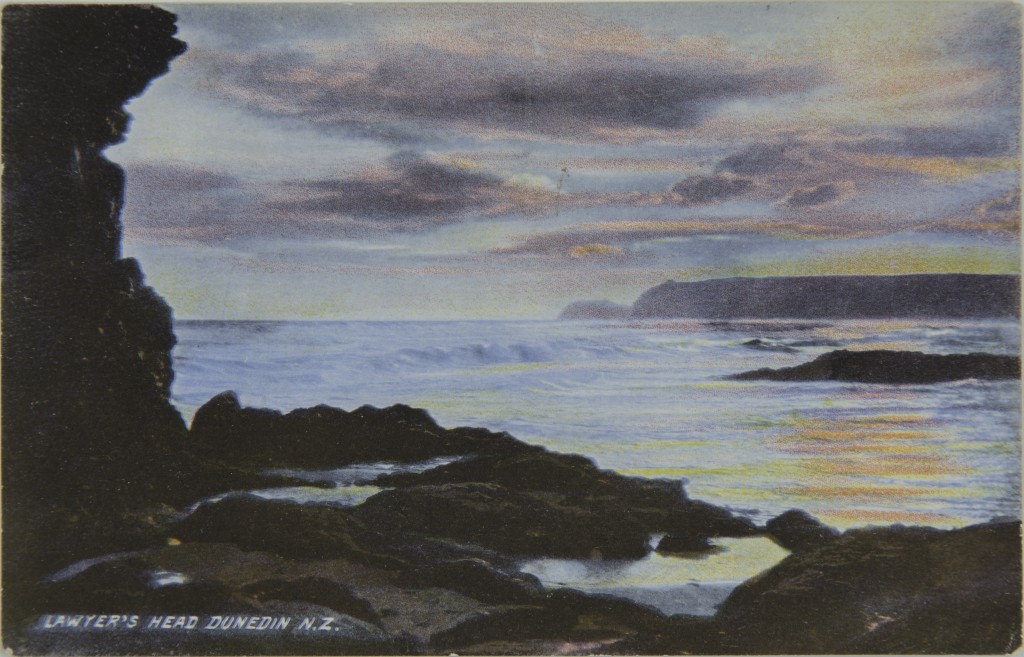 I would like to draw attention to Guy’s early postcards that at first sight might not seem as interesting or exciting to collect in terms of action.  These include colour lithograph views of sunsets and largely empty shorelines like that shown in figure 2, now such ubiquitous subjects in the postcard market with its modern printing techniques.  During the first decade of the twentieth century, however, such mechanically reproduced scenes were about as close to a real colour photograph as was possible.  Moreover, the subject of unspoilt nature in the form of uncrowded spaces, unpolluted water and clear skies was very topical (as indeed is still the case), as people in Europe looked to escape their over-populated, smog-bound cities and local authorities sought to attract the discerning public to Dunedin.

Guy’s career as a photographer covered the Edwardian period, often referred to as ‘The Age of Innocence’ before World War One.  Dunedin was a safe haven even by New Zealand standards and residents actively promoted the city as a good place to raise a family.  The Otago Witness newspaper published a weekly column espousing the teachings of local hero, F. Truby King and ‘Dunedin became the Citadel’ of the Plunket Movement.[vii]  The newspaper also supported the Dunedin Expansion League’s quest to attract industrious, skilled workmen with large young families to bolster the population, further business interests and regain the position of foremost city in New Zealand.[viii]

The golden beaches lying literally at Dunedin’s doorstep, which had been largely neglected by photographers until this point, constituted a major selling point and Guy’s photographs and postcards served an integral part in advertising the fact.  While the focus of photographers during the late nineteenth century had been on promoting the material progress of the colony and Muir and Moodie’s extensive stock of postcards concentrated on built-up areas of the city, Guy offered a change of scene and rather different set of values.  Along with his postcards of other public beauty spots like the Botanical Gardens and Outram Glen, Guy’s images of the open coastline spoke of a romantic closeness to nature and wealth of wholesome leisure activities which held universal appeal. 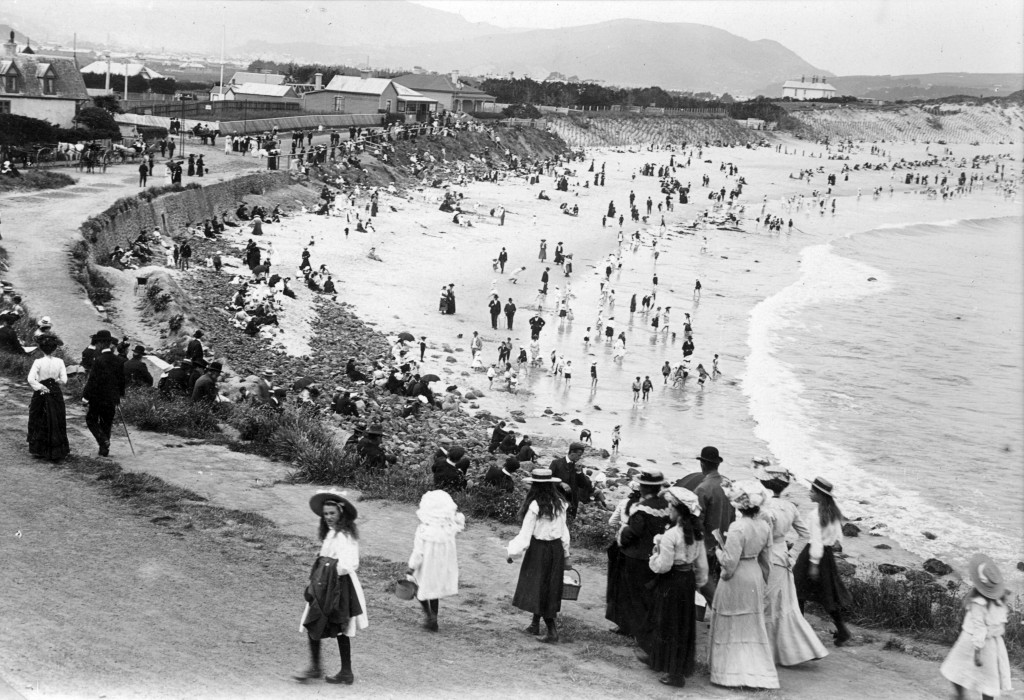 A critical aspect of the message was that the sandy stretch was accessible to all and, by in large, this appeared to be the case.  The trams that Bill Main noted as integral to Guy’s cityscapes, now linked the suburbs more completely to the business centre making it easier for everyone to travel and bathe in the salt water, walk along the esplanade, picnic and take in the fresh air.  Crowds of people made their way there each Labour Day when the weather was fine, and over the summer months as documented in Guy’s photographs published in the Otago Witness Christmas Annual (for example, see figure 3).  Copies of the Christmas Annual made their way across the world courtesy of the New Zealand Government Department of Tourist and Health Resorts.  Of course the very idea of being on the beach around Christmas time was a novelty for adults of European origin.  One copy of the Guy postcard in figure 4 (a photograph reproduced in at least four different postcard series including F.T. Opalette, F.T. Domed Glossine and Industria) was sent by one local resident as a Christmas card to a friend just down the Otago Harbour at Broad Bay. 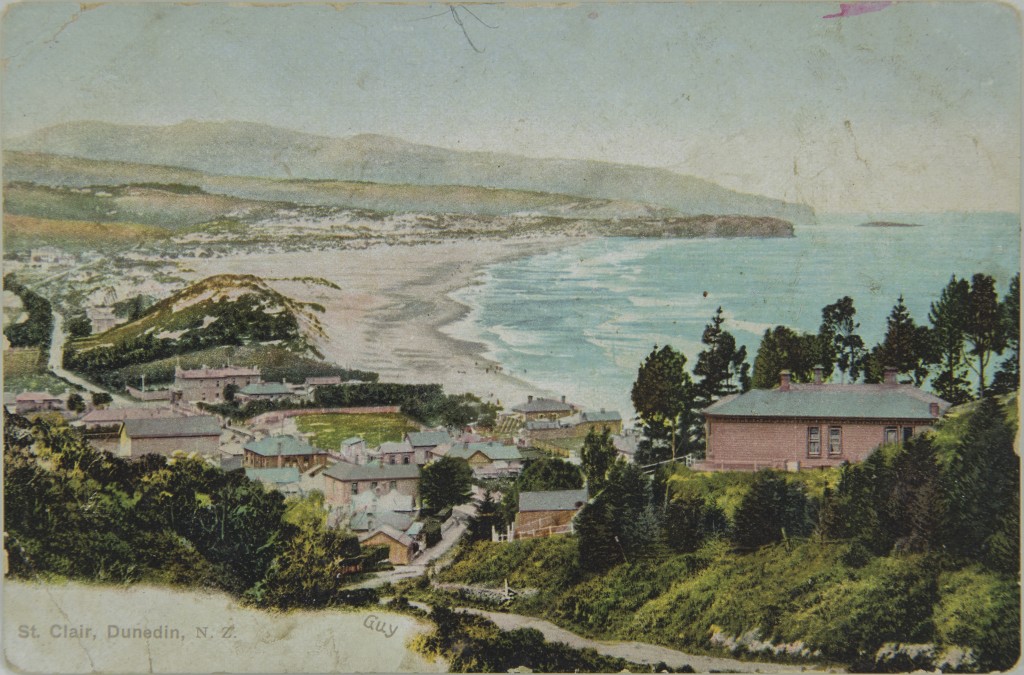 Yet then, as now, it was still possible to find the beach virtually to oneself and judging from his output, Guy spent hours photographing beside the sea.  Purely from an aesthetic point of view, Guy found an ever-changing play of light and form in the vista of earth, sea and sky between Lawyer’s Head and St Clair known as Ocean Beach, the warren of curious volcanic rock formations further south towards the expanse of sand looking out to Green Island and drama of the waves of the South Pacific Ocean hitting land.  Amongst the original prints by Guy in the Hocken Photographs Collection are many studies (figure 5) that obviously constituted a library of images to choose from for his postcards. 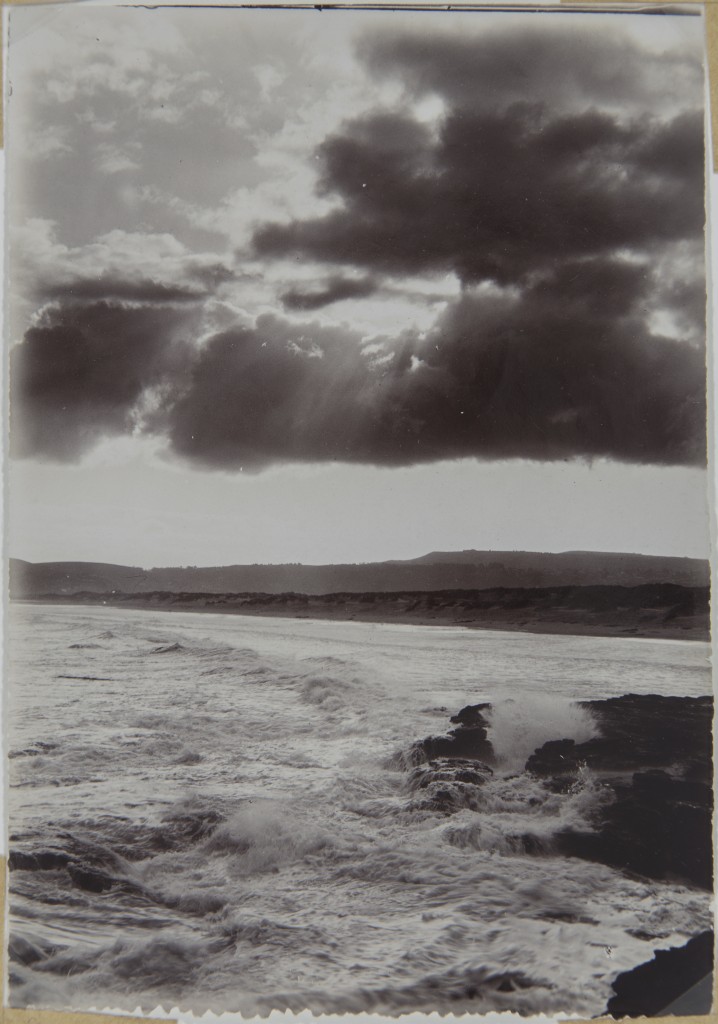 By working productively and spending the time, Guy established a personal relationship with the Dunedin coast, making it his own.  Though some other postcard images of the area by different photographers can be seen on the Hocken Snapshop site, Guy appears to have produced the largest number.  Guy’s postcards and published photographs comprise both public as well as more private views, perhaps none more so than those that include his own children enjoying themselves.  The card entitled ‘Ocean Beach, Dunedin. A Summer Seascape’ (figure 6) may well feature his three young daughters just above his signature, a portrait of whom is also reproduced here from the Hocken Photographs Collection (figure 7). 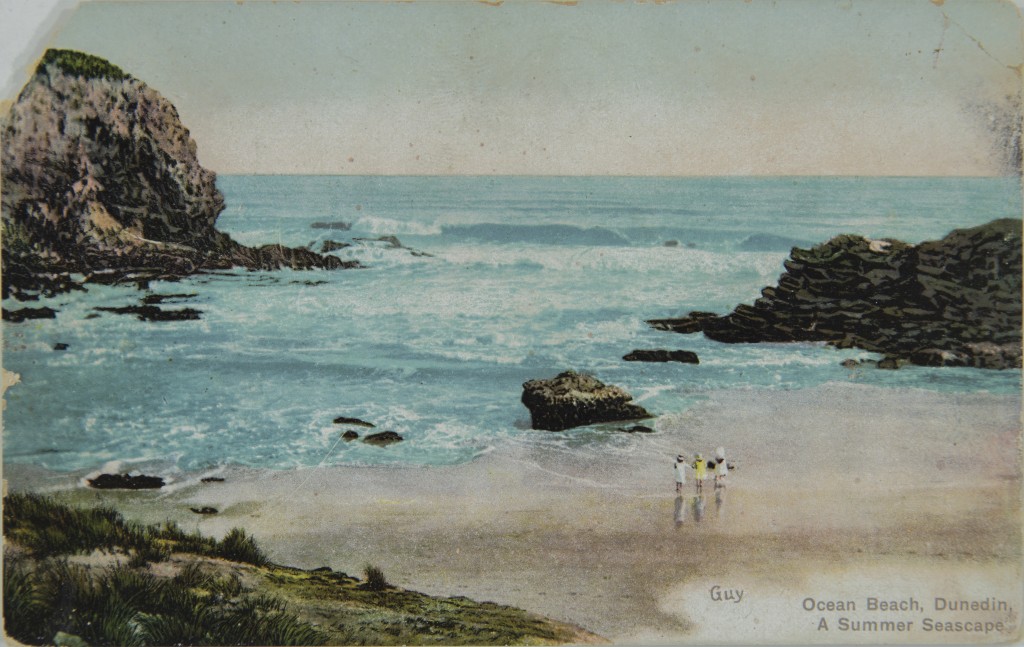 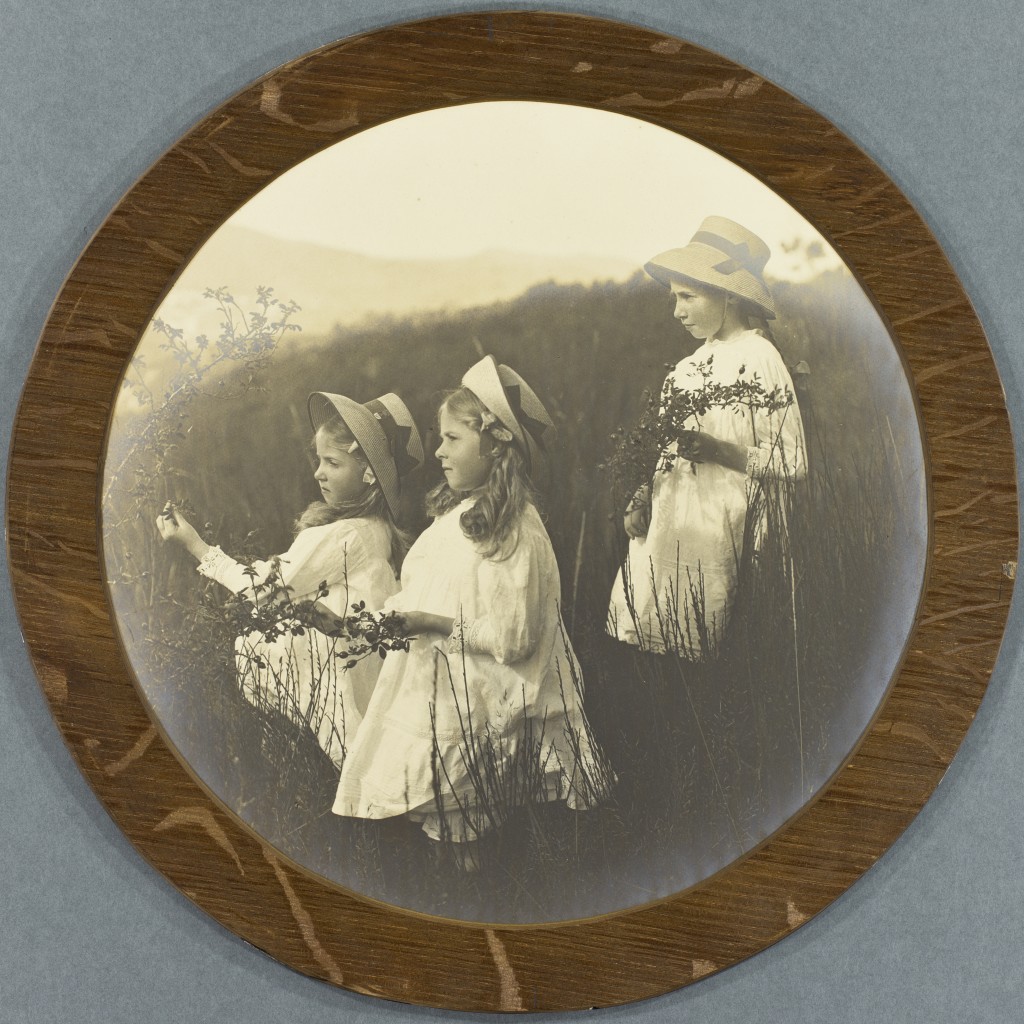 Studying postcards of the closest beaches at the Hocken, we are left with a record of Guy’s vision of a healthy city environment and people―fresh, clean, full of natural beauty and promise.  What were once new views of Dunedin are now old, but over a century later, they remain relevant.  The same virtues that Guy and other citizens valued continue to satisfy local residents and attract foreign families to the city.  Providing just a sample of the postcards held at the Hocken, Guy’s postcards are undoubtedly worth collecting and preserving.  They represent just a fraction of the postcards held at the Hocken but speak of the potential the collection holds for researchers as a whole.

[iii] Hardwicke Knight, The Photography of John Richard Morris: An Appreciation of his contribution to New Zealand portrait and view photography in the nineteenth century, Dunedin, 1995.

This entry was posted in Historical photographs, Print culture by Anna Blackman. Bookmark the permalink.

2 thoughts on “Postcards at the Hocken”