Today we’d be surprised to see tea marketed to teenagers.  However, in the 1960s, the New Zealand Tea Council made a concerted effort to engage with youth culture, promoting their product with brightly coloured ‘mini-magazines’ which included posters they described as ‘tea-riffic’ and ‘psychedelic.’  These posters were reported to have ‘caused a sensation right around New Zealand,’ ‘making the scene […] anywhere the “switched on” movement gathered.’ 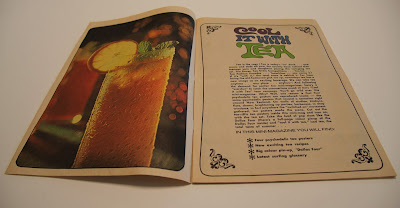 One of the ‘mini-mags’ c.1968 was clearly published in the warmer months.  Featuring a range of recipes for iced tea drinks and ‘go-withs,’ it presented tea as the go-to drink for any occasion.  On one page, readers are encouraged to ‘throw a partea,’ with recipes provided for alcoholic and non-alcoholic punches.  A recipe for one of these, ‘Tea-juana punch,’ is provided below.  Another page promotes iced tea as the right drink for the ‘surfin scene,’ and offers a glossary of ‘surfin’ terms.’ 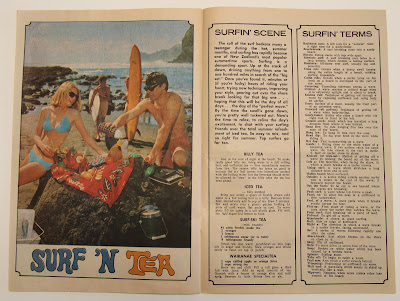 Featured also is a ‘Pop Profile’ of Auckland band the Dallas Four (incidentally the winners of the 1968 nationwide ‘Tea Rave Band Contest’).   They are photographed with their preferred drink of iced lemon tea.  Trade publications (titled Teamen) from the Tea Council indicate that along with the ‘Tea Rave’ contest, a wide range of events were sponsored throughout the country to promote tea to a younger audience.  They included a ‘Tea Dress’ contest, a ‘Tea is Fashion’ event, and a ‘Great Tea Race.’

As the Tea Council was simultaneously directing its advertising towards older age groups, the intensity of their push could well have been a response to something happening in the marketplace – perhaps competition from coffee?  Instant coffee was introduced to New Zealand in the 1960s, and a quick check of a New Zealand Official Yearbook from the period suggests that the Tea Council might have had valid cause for concern.  In 1968, New Zealand imported 7,179,006 tonnes of tea, and 3,972 tonnes of raw coffee.  The corresponding quantities in 1970 were 7,636,228 tonnes and 6,123 tonnes, respectively – reflecting quite a caffeinated leap ahead for coffee!

The Council’s promotion of tea to teens revolved around the concept of tea as a new and exciting option, part of the counter-culture almost;  one that could set a drinker aside from their peers as a ‘fashion leader’ or a ‘trend setter.’  The kind of people who ‘woke up to tea’ were ‘not afraid to laugh at convention.’  Drinking tea was presented as a rebellion of kinds; a chance to ‘sort the way-outs from the never-ins.’ 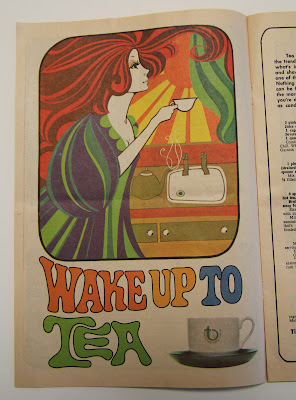 The advertising recognises teenagers as active consumers with ample leisure time.  One poster encourages the ‘tea-in,’ a ‘laze-around listen-along tea session where you invite your friends, listen to the latest and just be downright different. […] A ‘tea-in’ can be as mobile as you like.  Load your surfboards, transistor record player, bikini and suntan lotion into the car, pack a couple of thermos flasks and throw a ‘tea-in’ beach style.’ 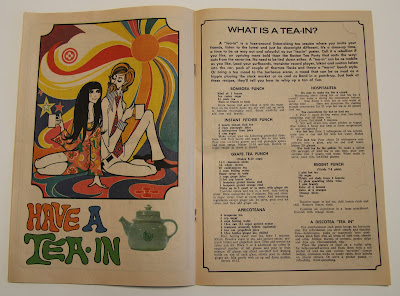 It’d be interesting to know how these advertising efforts were received.  Do you have any recollection of them?   Did they convince you that ‘tea is the fashion?’ 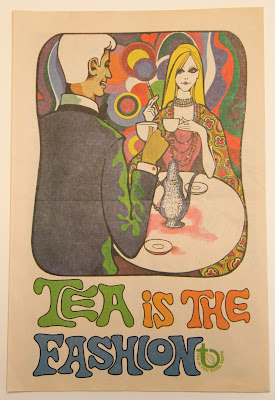 This entry was posted in Ephemera and posters, Food and drink, Graphic art, Popular culture by Anna Blackman. Bookmark the permalink.

One thought on ““Join the swinging tea set!””