Today (9 June) is International Archives Day. Created in 2008 to raise awareness of the importance of archives, and of what archivists do, the date was chosen to commemorate the establishment of the International Council of Archives (ICA) on 9 June 1948.

Archives and archivists across the world use the day as an opportunity to promote what they do, and to promote the use of archives.

I thought I would take the opportunity to write about an interesting archival volume I looked at recently. This volume encapsulates for me what is so interesting about working with archives and how researching the stories documented in archival items can lead us down many different narrative pathways.

The volume originally caught my attention on the Hākena catalogue because the name in the title was clearly unusual and to my eye looked just wrong! A spelling mistake maybe? Making sure the description of archives is correct or as correct as it can be is one of my responsibilities here so I decided to have a look at it. 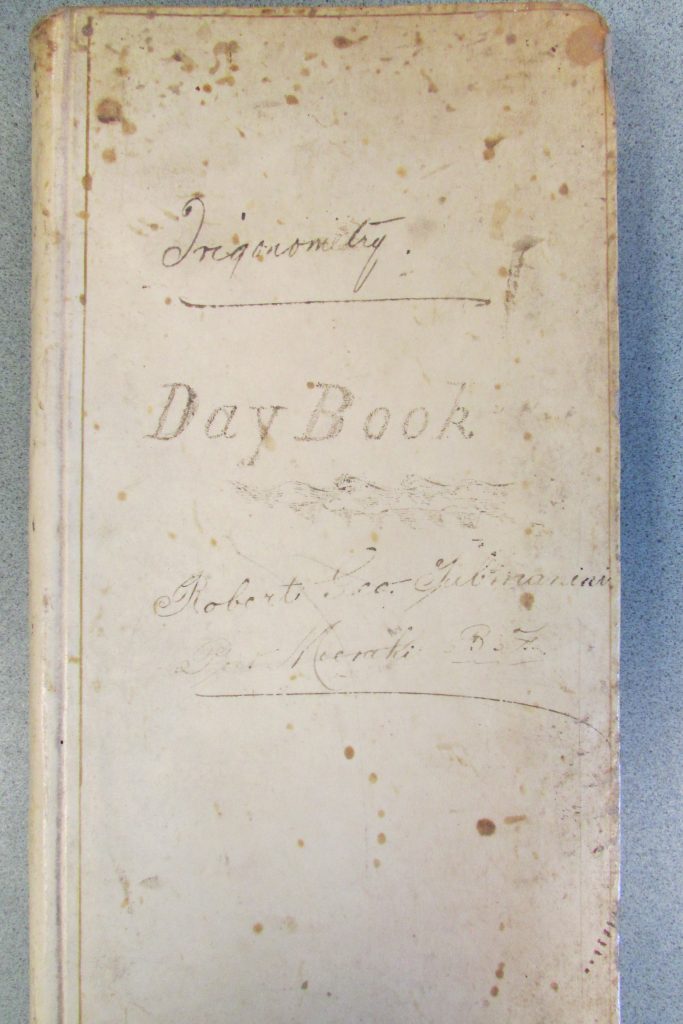 The title was “[Tubinanini], Robert George : Port Moeraki Day Book (1858 – 1873)”. The titles of archival collections are constructed with the name of the creator of the collection first, and then a brief descriptive title. This is in accordance with the standards set by the ICA.

So in this case the archivist had (not unreasonably) taken the most obvious name that they could find on the volume, and decided to use that as the creator portion of the title. They had enclosed this portion in square brackets to show that they were unsure of the correct spelling and that this was their interpretation of the hand writing.

It is a tall 19th century volume bound in white velum, looking a bit like Harry Potter might have doodled in it with some odd notes and diagrams in one section. Some pages have been cut out towards the end of the volume. 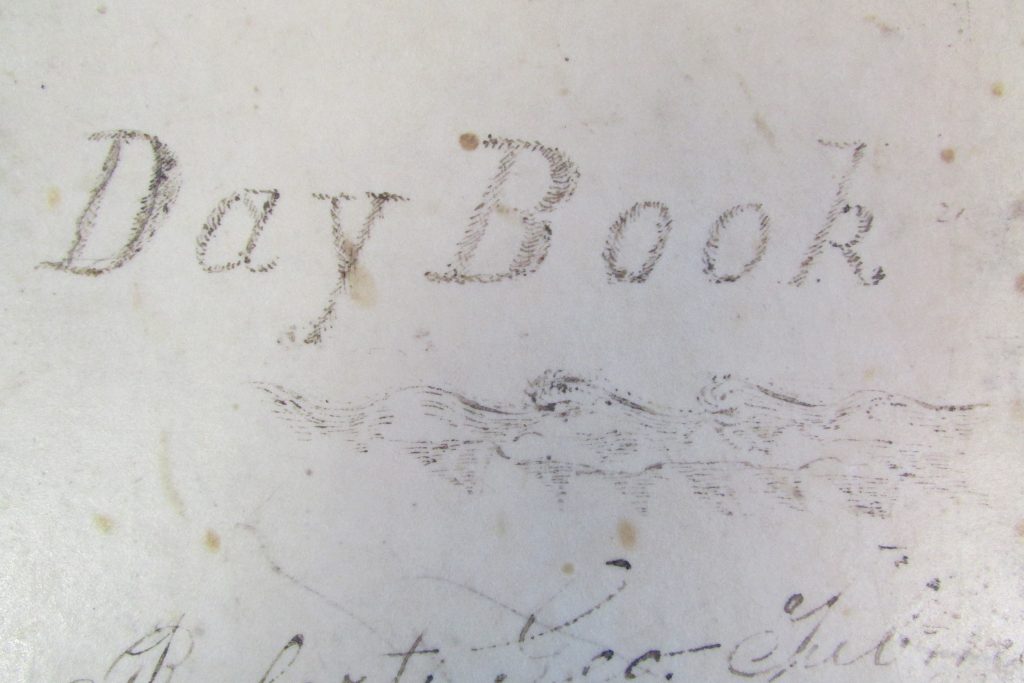 The front of the volume, note how carefully the words Day Book have been drawn, along with the image of waves at sea.

It clearly started life in October 1858 as a day book (sometimes called a cashbook) – a book that records financial transactions in date order. The front of the volume seemed to have been labelled in a couple of different hands and at different times. The words included “Trigonometry”, “Day Book”, “Robert Geo. Tubmanini” (my reading of the problem name), “Port Moeraki”, what looks like the initials “B. F.” and a doodle of waves. Perhaps the doodler spent a lot of time at sea? 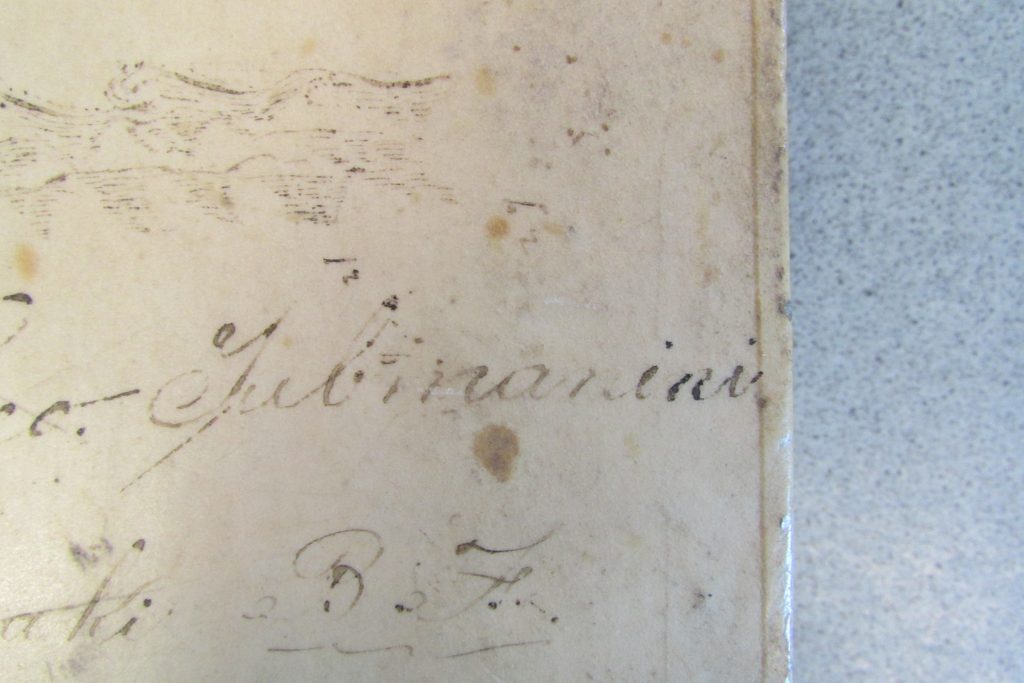 Despite being acquired in 1974 the volume was not catalogued until 1998 when it was added to the online catalogue Hakena, things have changed since then and it is a lot easier to quickly research names and places by a quick “googling”.

I started with the name Robert George Tubinanini – the reason I have noticed the record on Hākena in the first place.

My googling quickly told me that a Robert George Tubman was the Head Master of the Moeraki School between 1890-1895 and that he died serving in the Boer War. There is a nice biography of Robert available from the Historic Cemeteries Conservation Trust of New Zealand website, that includes a photo of his family’s gravestone in Dunedin’s Northern Cemetery. http://www.cemeteries.org.nz/stories/tubmanrobert181012.pdf 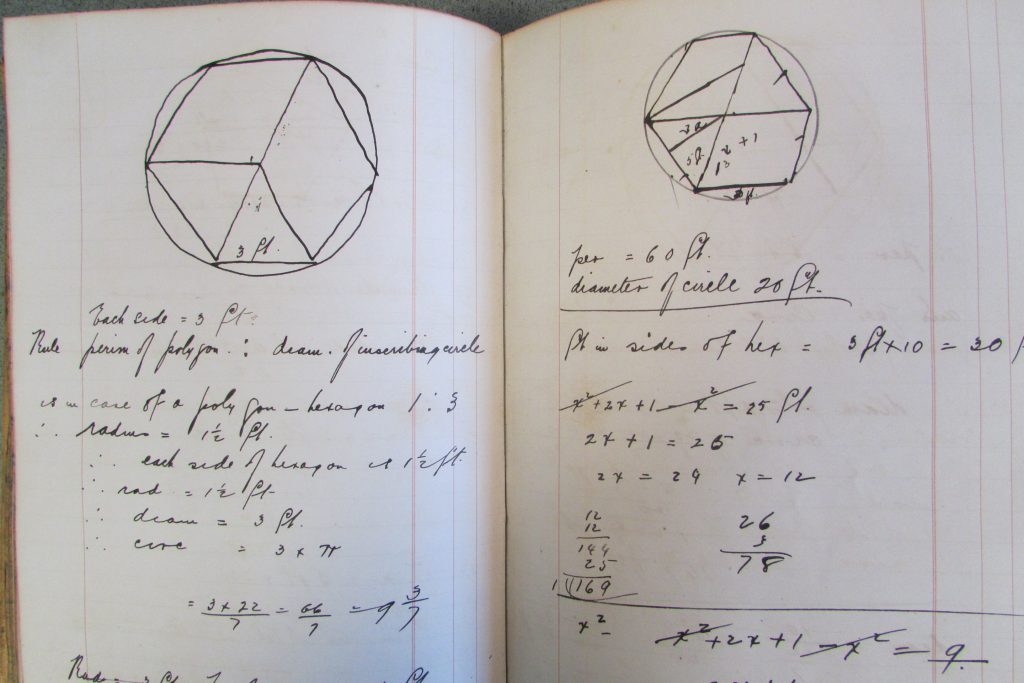 It seems likely that he is the Robert Geo. Tubmanini named on the cover of the volume and that the  Harry Potter doodles are his trigonometry notes. What is not clear is why his name has the extra “ini” on the end (another idle doodle perhaps?) and why he had the day book and used it as a notebook. 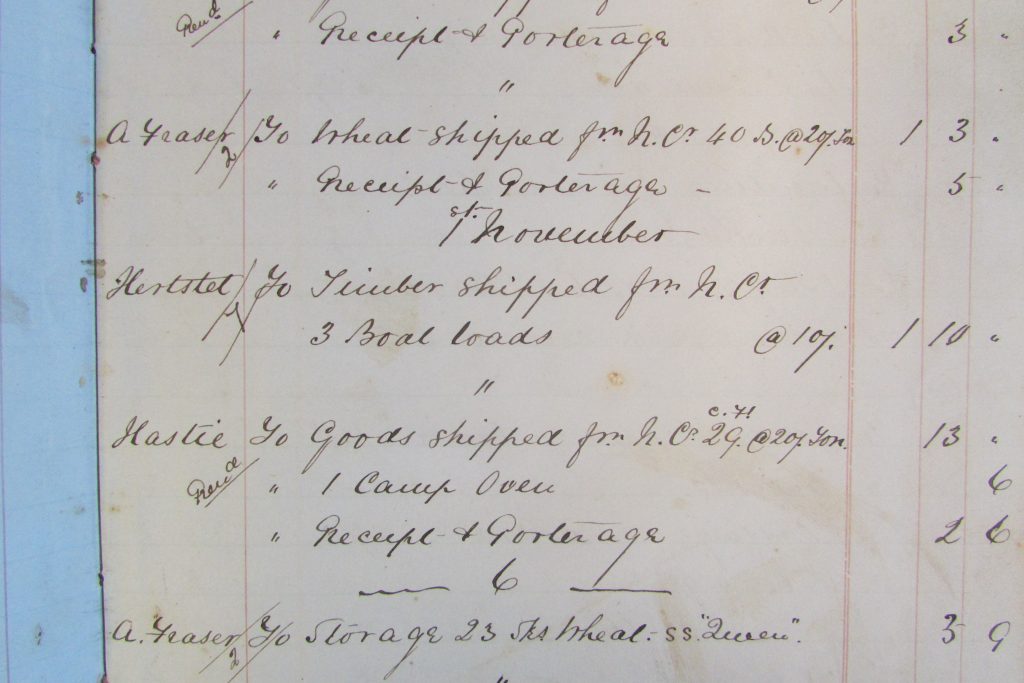 Back to the daybook portion of the volume. This is a particularly detailed example of a day book, and list transactions in date order, with the person’s surname, the goods purchased, shipped or received and the cost. I noticed that there were regular entries under particular names, clearly the store was a key institution in this community. Some names were European but there many Maori names as well. A keen researcher of Moeraki history is sure to find much of interest. 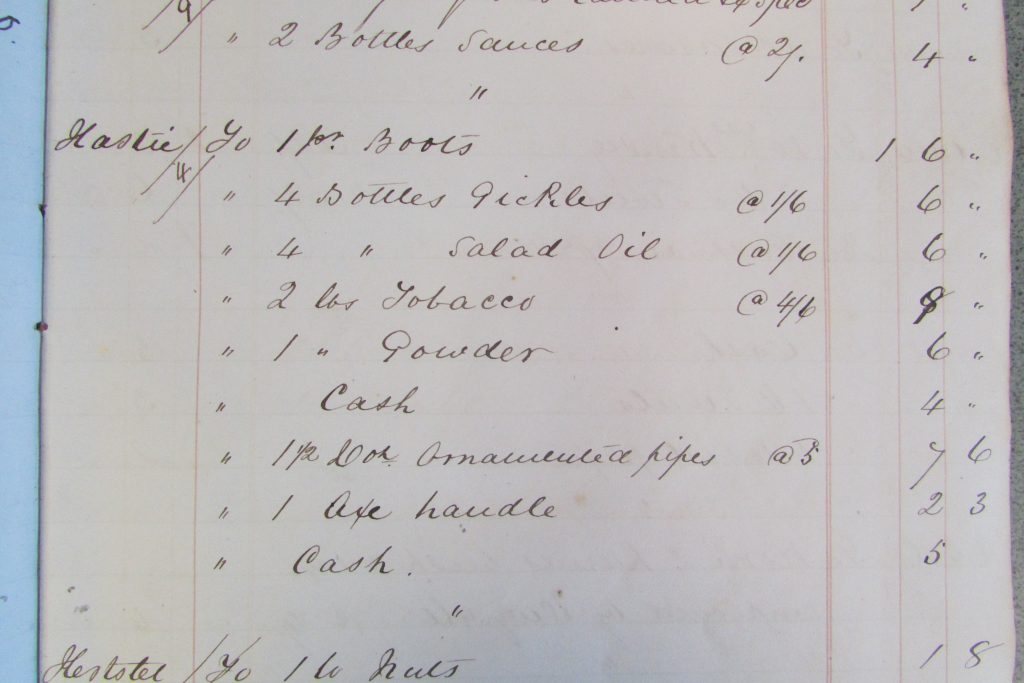 The luxuries of life in the Moeraki in 1857 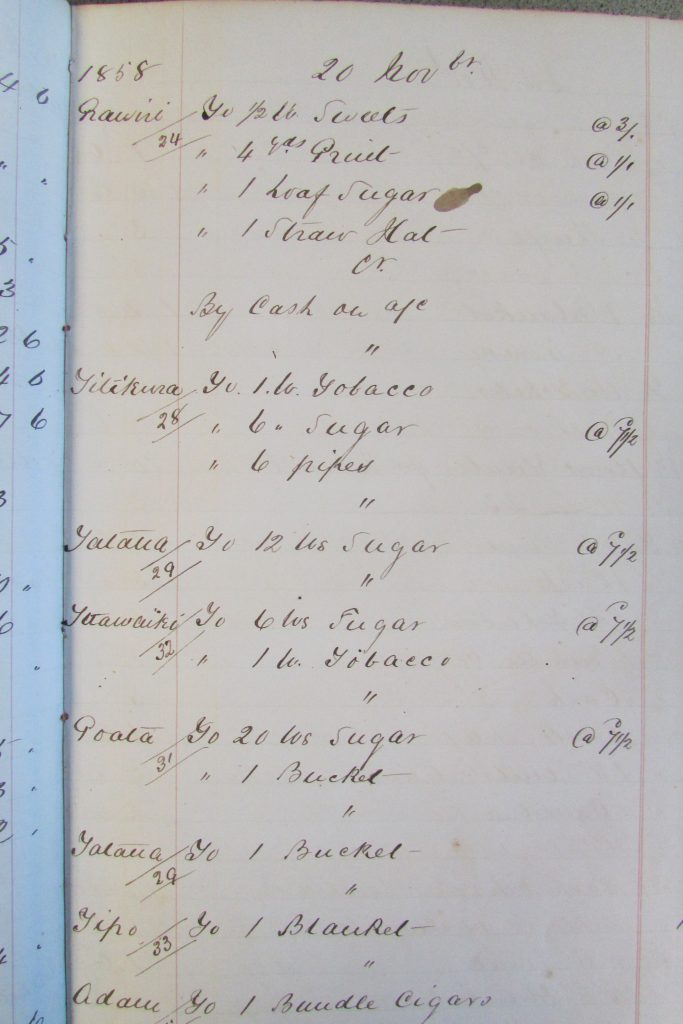 One name that stood out was Hertslet, it is unusual and cropped up almost daily. This time I headed straight to Papers Past, the National Library website which has revolutionised access to the myriad information contained in early NZ newspapers. I found that Henry Charles Hertslet regularly advertised the services of his store at Moeraki as well as other business ventures. He was also a Justice of the Peace for a time. An entry in the Otago and Southland volume of the 1904 Cyclopedia of NZ which revealed that Hertslet had a background in the “Public Records Department London” in the early 19th century before migrating to NZ. This was a nice serendipity as the Public Records Department is now known as the Public Records Office, and is the national archives of the UK. I guess you could say he had worked as an archivist, like me!

From what I found online, Mr Hertslet clearly had a long and varied career as an early settler in several parts of NZ but is mainly associated with Oamaru, Moeraki and Naseby. According to C.W.S. Moore’s book, Northern Approaches, and Gavin McLean’s Moeraki 150 years of Net and Plough Share H.C. Hertslet was landing agent for Moeraki from 1851, and later purchased a schooner, Queen, to run a service between Moeraki and Oamaru employing Maori from Moeraki to man the boats. 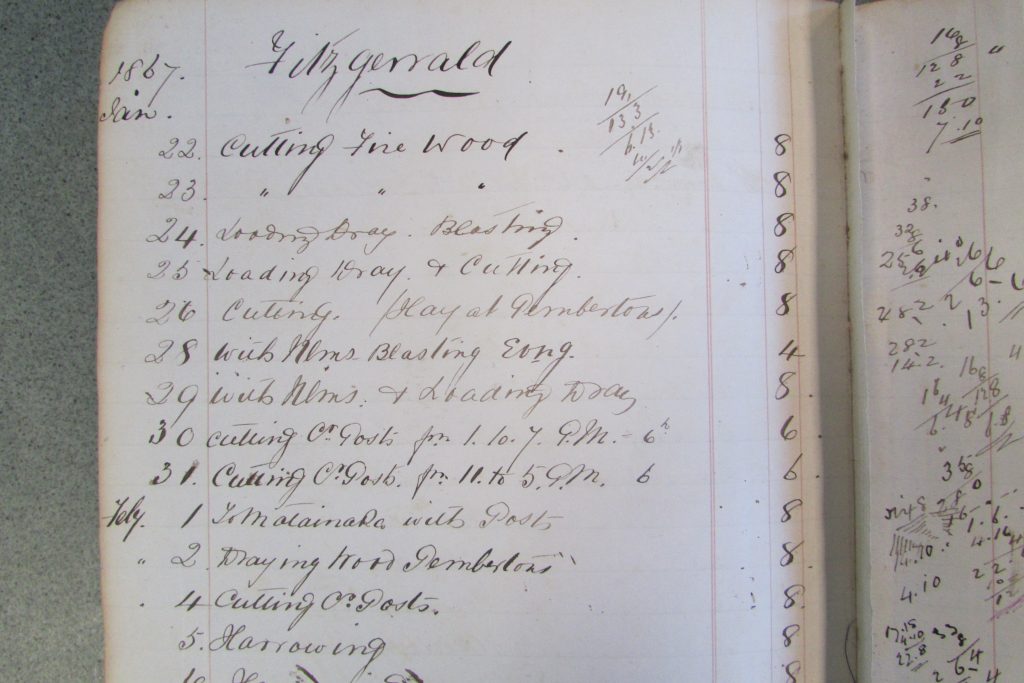 Wages paid to Fitzgerald in 1867

At the back of the book are further dated lists of payments but these appears to be wages paid to a number of workers including Fitzgerald, Frederick Cockerill and Joe. Thompson. The work done was activities like delivering firewood, ploughing, harrowing and draying.

To sum up, this volume is a record of the transactions of the Moeraki store kept by either Mr Hertslet himself or one of his employees, sometime later it came into the hands of Robert Tubman, who seems to have taken advantage of some blank pages to write up his trigonometry notes. Later again it was acquired by the Hampden Historical Society which donated this volume to the Hocken along with around 40 others when the Society was wound up in 1974. In archivists jargon it has multiple provenance, it was created and used by more than one creator but is all the richer a source of history for that. It leads us to several narratives – the lives of Henry Charles Hertslet, and Robert Tubman, and to the broader social and economic history of Moeraki in the mid 19th century. Family historians may be interested to find references to the day to day dealings of their ancestors.

This entry was posted in Archives and manuscripts, Business history, Research by Anna Blackman. Bookmark the permalink.