I have recently returned to work from a year’s parental leave and while I am very pleased to be back, my mind is still often occupied by all things ‘baby’.

During one of my more recent 4am night feeds, I thought now would be the perfect time to take inspiration from this maternal period in my life to focus on the ‘wee ones’  whose care I am partly responsible for in my professional life.  Those ‘littlies’ in the archives that may be small, but are also perfectly formed.

Our “octavo” sequence of archives is broad in range, and runs to a full 90 linear metres in length.  It includes personal volumes such as diaries, reminiscences, letter books, notebooks and bibles, as well as records of organisations such as minute books and ledgers.  Many of the volumes are in a very fragile state and have preservation copies so that researchers can have access to them, without further harming the original.

Octavo is a book binding term that refers to small volumes which were originally made by folding a full sheet of paper three times to make eight leaves, each leaf being 1/8 the size of the original sheet of paper. In practice such volumes are roughly 8-10 inches in height. 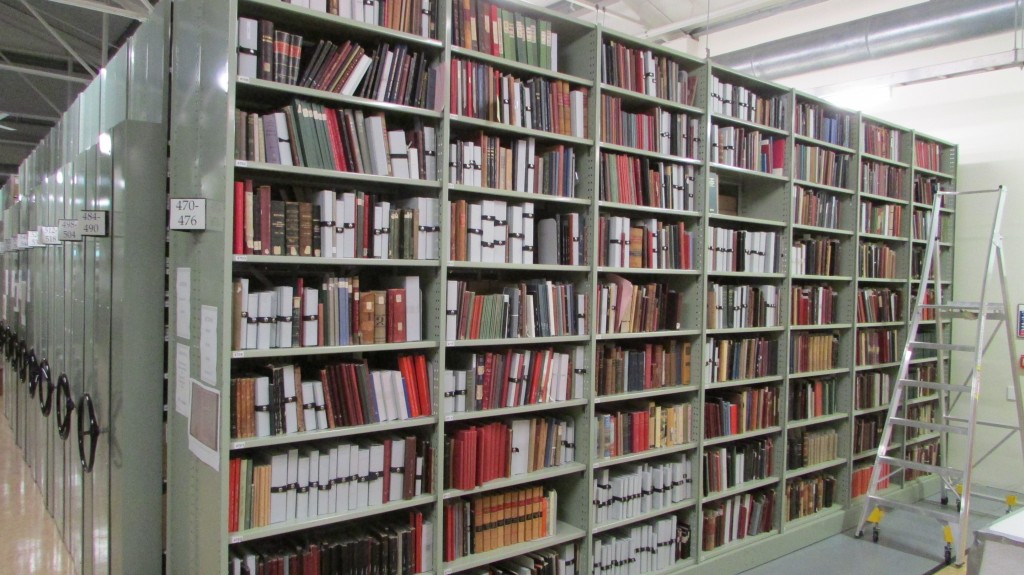 However, our diminutive friends are not just to be found within the octavo sequence alone – they will often be found dotted throughout the collections in various guises, from the tiny appointment books of poet, editor and Hocken benefactor Charles Brasch through to the miniature soldier’s diaries that have miraculously survived through rough war conditions.

This blog takes a look into just a few of the more significant of these babies, safely ‘swaddled’ within their phase boxes for maximum care and protection. 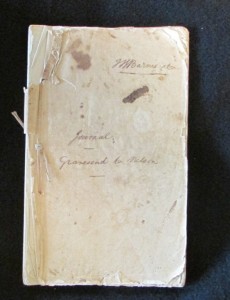 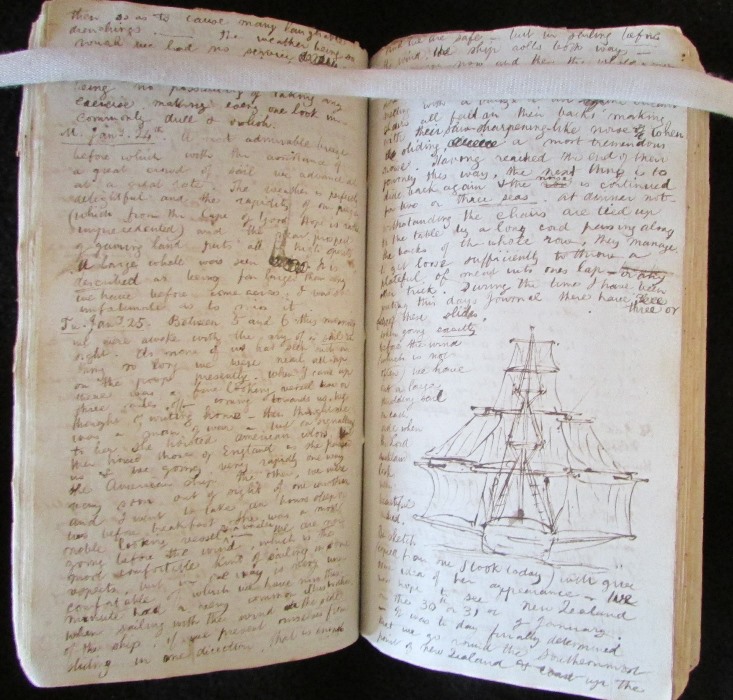 The diary includes pen illustrations of the ‘Lord Auckland’, detailed life aboard ship and diagrams of the ship’s accommodation and deck layout. Misc-MS-1451/001. 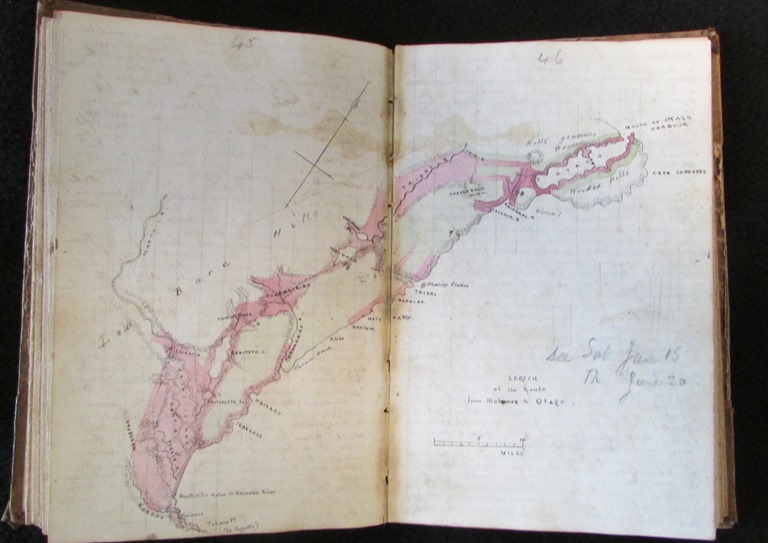 In March 1844 Barnicoat was employed to assist Frederick Tuckett in selecting a site for the future Otago settlement. This beautifully sketched map shows ‘The route from Molineux [sic] to Otago’. Misc-MS-1451/003.

The corresponding diary entries (written in pencil on the sketch page and partly transcribed below) relate to the purchasing of the Otago Block.

‘S. June 15: …This [sketch] shews to what extent it is proposed to effect purchases from the natives for the purpose of the New Settlement.’

‘Th. June 20: Tuawaike, Karetai & Taiaroa signed a memorandum binding them to sell the whole country from Otago to Molineux as shewn in the sketch…with a single reserve for the sum of £2400.’ 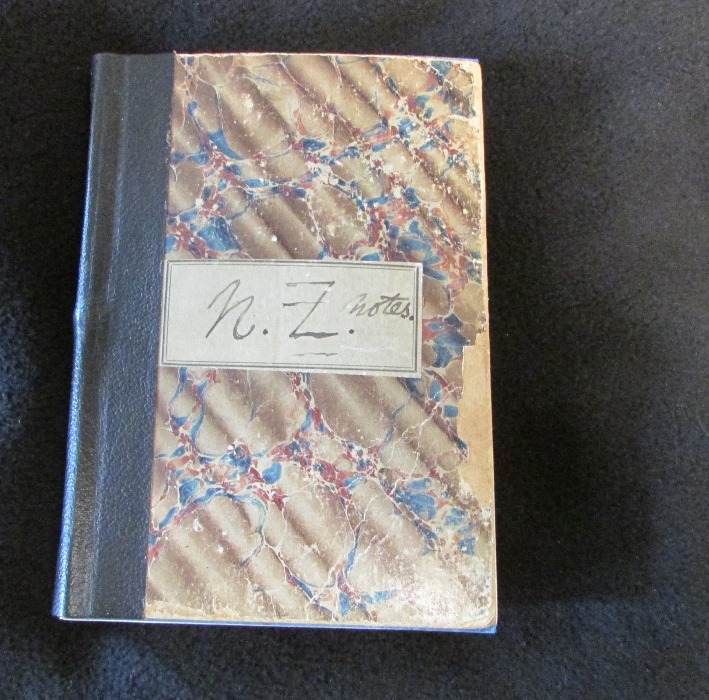 This volume of handwritten notes on New Zealand and Otago history and people, is part of the original ‘nucleus’ collection of Dr Hocken, and is dated around 1892. MS-0037. 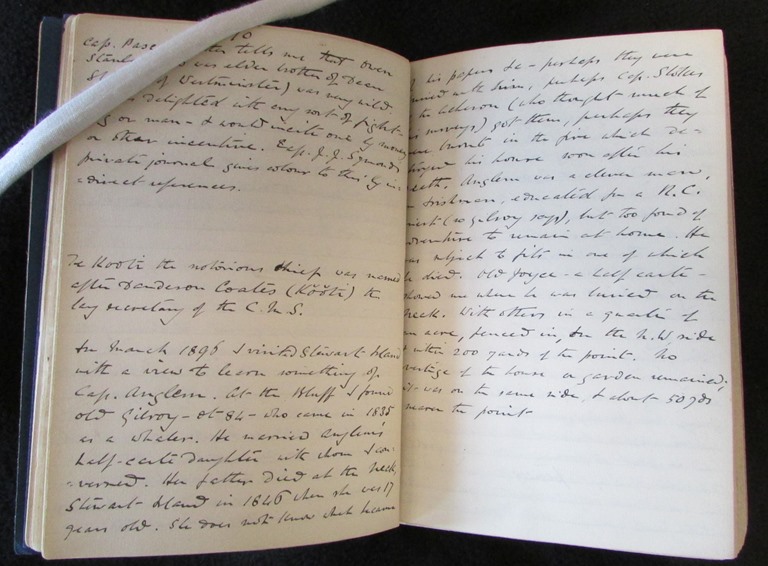 One of Dr Hocken’s entries on the origin of Rongowhakaata leader, military leader and prophet Te Kooti’s name – a transliteration of Coates, the name he received in baptism.  MS-0037. 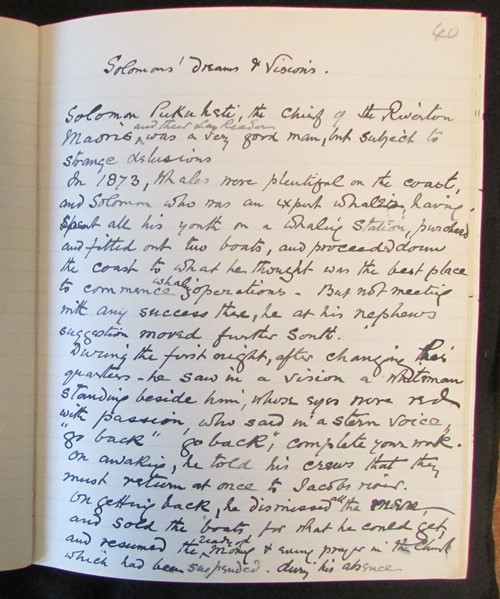 MS-0484/001.First volume of reminiscences, began in 1916, of Civil and Mechanical Engineer Edward Roberts (1851-1925). It spans his upbringing on the Bendigo Goldfields of Victoria, his arrival in Dunedin in 1881 and engineering career. There are some excellent ink sketches and an interesting account of the Dunedin and Kaikorai Tram Company in 1894. MS-0484/001. 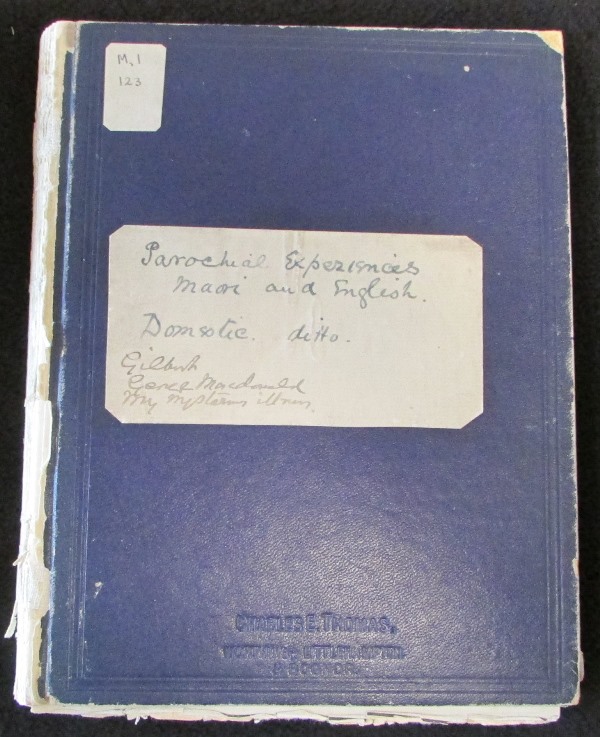 I will finish with this interestingly titled volume from Rev. James West Stack (1835-1919), the oldest son of missionary James Stack. It consists of handwritten anecdotes and reminiscences drawn from a period of more than forty years, many relating to Stack’s experiences among Maori.  MS-0123. 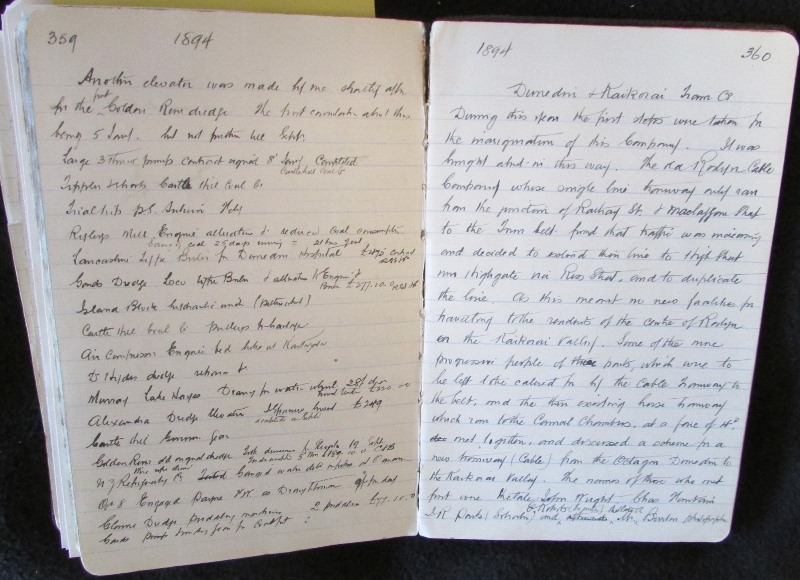