As well as sheet maps, charts and Atlases of New Zealand, Australia, Antarctica the Pacific and the wider world, the Hocken Maps Collection contains a wide variety of cartographic resources and reference materials. This portable terrestrial globe produced by George Philip & Son, London and Liverpool, is an example of such a resource. 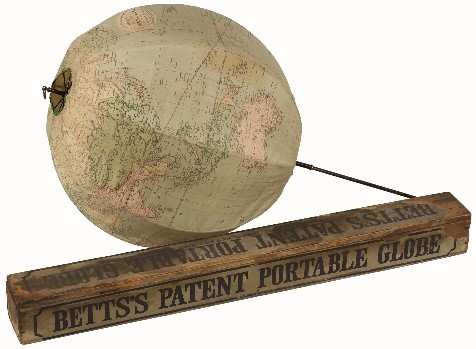 John Betts (fl. 1844-1875) was a London publisher specialising in low cost educational products which were large enough for children to observe features easily. This particular style of collapsible globe was patented by Betts in the 1850’s. The firm was taken over by George Philip & Son around 1880. Regular updating kept the globe in production well into the 1920’s.

An 1850’s version of the portable globe produced by Betts was 12.5 cm in diameter and had 8 hand lithographed paper gores. Cotton cords held between the gores and backing paper extended through the poles were pulled on a thread and fastened with a bead at the top to form an inflated globe. A facsimile version of this globe made in the same way as Betts original globe is still available to purchase from a British Globe maker.

George Philip (1800-1882) cartographer and map publisher, was born at Huntly, Aberdeenshire, Scotland into a Calvinist family. Two of the sons became ministers and the teaching of the local minister instilled in George the value of education for everyone.

He began his career working for a bookseller in Liverpool and later set up his own business. He placed orders with well-known cartographers for maps on copper plates which he had printed and hand-coloured. The bulk of his production was for the commercial, and particularly the educational market.

The firm supplied atlases and textbooks for many overseas countries in several languages, beginning with an atlas for Australian schools in 1865 and for New Zealand in 1869. The firm also published many maps of New Zealand.

George Philip and Son was sold in 1988 to the Octopus Publishing Co, part of Reed International Group of Companies, London.

The Hocken Collections globe is produced by George Philip and Son. Packed in a wooden box, it can be inflated by a metal umbrella type mechanism. It was intended to be a low cost portable education device for classroom teaching, easily transported and loaned to schools. The gores are made of silk. Wear and tear of the silk has meant that examples in good condition are very rare.

This entry was posted in Maps, Print culture by Anna Blackman. Bookmark the permalink.