Posted on September 25, 2020 by Lachlan Paterson

Te Tumu is excited to announce the appointment of a “new” lecturer.  Of course, many will already know Dr Erica Newman, as she has studied and worked in Te Tumu in various roles over many years. Moving into a confirmation-path lecturer’s role in the Indigenous Development programme is the culmination of all her hard work. 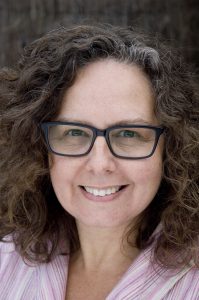 Erica’s research has focused on children and adoption.  She undertook her BA (Hons) in Te Tumu, completing a dissertation on Māori, European and “half-caste” children in New Zealand from 1840-1852, with a specific focus on the care of children.   She followed this with her MA, a history of adoption/whāngai within Aotearoa New Zealand, including the concept of “whāngai”. This research contains a special emphasis on transracially adopted Māori children and its effects on future generations, something pertinent to Erica’s own whakapapa.  Her PhD, completed in 2018, looked at the adoption of children in Fiji during British colonial rule of 1874- 1970, including both indigenous and colonial practices and institutions.  Erica has also attended various conferences, and published on her research, including an article on transracial adoption in the prestigious American Indian Quarterly in 2013.

More recently Erica has managed to get through to the second stage of a Fast Start Marsden application on the historical effect of adoptions for descendants of Māori adoptees, how adoption not only affects the adoptee, adoptive parents and biological parents but the ripple effect carried down to following generations. This includes the importance of whakapapa in how Māori adoptees are able to, or not able to, identify themselves as Māori.    We have our fingers crossed that Erica’s Marsden bid is successful, as this will be exciting and useful research.

Erica has managed a strong research trajectory despite a heavy teaching load. She has long been responsible for Te Tumu’s giant MAOR102 Māori Society paper, managing hundreds of students each year and a troupe of tutors.  Last year she was part of team organising Te Tumu’s modules in the (even larger) POPH192 Population Health paper.  But since 2008 Erica has also taught in a variety of other papers in all of Te Tumu’s programmes over the years, as well have undertaken supervision duties in the Master of Indigenous Studies programme.  We’ve seen a number of innovations, such as an in-house journal for the MAOR202 Tikanga and Māori paper, to give undergraduate students an idea of what it is like to publish an article, and developing special tutorials for MAOR102 students who come to university already very knowledgeable on tikanga Māori.

So in many ways, not too much is going to change for Erica—she will still be working flat-tack on her research and teaching.  It’s just wonderful that we can all celebrate in her success.

Neigbourly success, on a Pacific theme.

Posted on November 6, 2019 by Lachlan Paterson 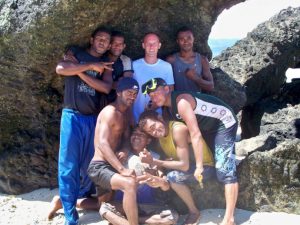 John Shaver of Religious Studies (centre, back) with friends in Fiji.

Earlier this year, due to move logistics within the Humanities Division, some Te Tumu staff had to shift rooms.  This led to our Pacific Island Studies team sharing the fourth floor with academics from the Religious Studies programme.  Te Tumu would like to congratulate one of our new neighbours, Dr John Shaver, for winning a Marsden Grant to undertake further research on religious practice in Fiji.

Click here to find out more about his project, “Investigating the impact of religion on cooperation and inequality in Fiji”.  We look forward to finding out more as his project progresses.

Posted on November 23, 2015 by Lachlan Paterson

Associate Professor Jenny Bryant-Tokalau presented a paper to the conference ‘Islands and Oceans: Navigating Pacific Futures’ held at Auckland University, November 12-13th 2015.    Jenny’s paper, entitled ‘Reforming Land Tenure in the Pacific: requirements and implications, the case of Fiji’, was chaired by former Oxfam director Barry Coates, and was part of an intensive two day workshop between University of Auckland (Pacific Studies), Auckland University of Technology, Australian National University and the University of Otago to look at areas of collaborative Pacific research. 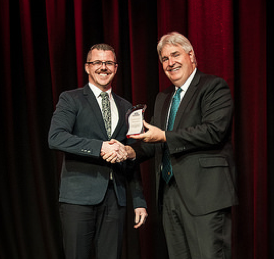 Te Tumu PhD student Nathan Albury recently was awarded the Griffith University School of Language and Linguistics Outstanding Alumnus Award in recognition of his PhD research into folk linguistics for Te Reo Maori and Sami language. Nathan is completing his PhD at the Centre for Multilingualism in Society Across the lifespan – MultiLing (CoE), Department of Linguistics and Scandavian Studies, University of Oslo,with Dr Lyn Carter (Te Tumu) as one of the supervisors. 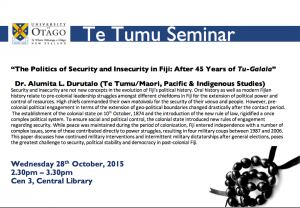 Dr Alumita Durutalo’s seminar on “The Politics of Security and Insecurity in Fiji” has been rescheduled.  This will now be held 2.30pm, 28 October, in CEN3, in the Central Library. 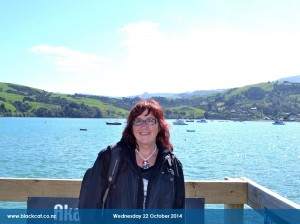 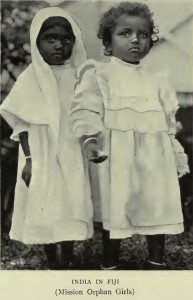 Te Tumu PhD student Erica Newman will be presenting the research presentation, Guardianship in Early Colonial Fiji, on 12 November.  Please note that the venue and time have changed to previously advertised.  It will now be 3.30-4.30 pm in R3S10 (3rd floor, Te Tumu building).

Abstract:  Fiji became a British Colony in 1874 and within five years the Indian Indentured Labour Scheme was introduced to provide workers for the European owned plantations.  Care of any orphaned children from these plantations was the responsibility of Colonial Office bureaucrats who applied the western systems of guardianship and adoption that they used throughout the Empire.This seminar will examine five examples of Colonial Office correspondence negotiating the approval of guardianship of children, between the years of 1889 to 1900. A study of these files reveals the circumstances of the child, those who were approved guardianship, and why they sought to become a guardian.

Posted on August 8, 2014 by Lachlan Paterson

Great News: Te Tumu’s Assoc Prof Jenny Bryant-Tokalau has just been appointed as Adjunct Professor in the School of Government, Development and International Affairs, Faculty of Business and Economics, at the University of the South Pacific in Suva, Fiji.   Even better news…This doesn’t mean that Te Tumu will be losing Jenny, who is the Coordinator of our Pacific Islands Studies programme, and Chair of our Postgraduate Committee.  The USP position is an honorary one in recognition of her research on Fijian topics.