In the first edition of his The Search After Truth of 1674, Malebranche devotes the last section of Book Two to ‘Those who perform experiments’, and this section appears in all six subsequent editions of the book. (See The Search After Truth, eds T. M. Lennon and P. J. Olscamp, Cambridge: Cambridge University Press, 1997, pp. 159–60.)

He then proceeds to list seven faults, though ‘there are still many other defects … we do not pretend to cover them all here’ (p. 160).

First, their experiments are normally directed by chance and not by reason.

Second, they are ‘preoccupied with curious and unusual experiments’ rather than beginning with the simplest and building up from there.

Third, they seek out those experiments that will bring them profit, lucriferous experiments, as Bacon would call them.

Fourth, they don’t take enough care to note down ‘all the particular circumstances’ that pertain to the experiment at hand, the time of day, place, quality of the materials, etc.

Fifth, they draw too many conclusions from a single experiment, whereas it’s normally the case that one conclusion can only be drawn from many experiments.

Sixth, they only consider particular effects without ascending to ‘primary notions of things that compose bodies’ (p. 159).

And seventh, they often ‘lack courage and endurance, and give up because of fatigue or expense’ (p. 160).

None of these criticisms seem very serious, after all, it is easy to find exceptions to each one in the experimental practice of experimental philosophers in the 1660s and 1670s. One could hardly accuse Newton’s of being directed by chance in the construction of his experimentum crucis for establishing the heterogeneity of white light, even if his discovery of the oblong form of the spectrum of colours in his first experiment was unexpected or discovered by chance. Nor could one accuse Boyle of giving up on account of fatigue or expense in his air-pump experiments.

Yet the heart of Malebranche’s critique is found in the final paragraph of the section on the causes of the seven defects. He lists three causes: lack of application, misuse of the imagination, and, most importantly, judging the differences and changes among bodies only by sensation (p. 160).

This third cause is Malebranche’s real reservation about, not experimental philosophers, but experimental philosophy itself: for this cause implies an over-reliance on the senses, and by implication, an under-utilisation of reason, and, in particular, reasoning from clear and distinct ideas. The whole of Book One of The Search After Truth is given over to a discussion of the unreliability of the senses. For example, one rule of thumb that he sets out in Chapter 5 is: ‘Never judge by means of the senses as to what things are in themselves …’ (p. 24).

Of course, Malebranche is not averse to appealing to experiments and observations when they reinforce a point he is making (see Book I, chap. 12, pp. 56–7), however, the prioritising of experiment and observation above reasoning from pre-established principles and hypotheses – a central tenet of experimental philosophy – is not one of his epistemic values. Malebranche was opposed to experimental philosophy in principle, and not merely because of the ‘defects’ of its practitioners.

Two years ago on this blog I addressed the ‘Straw Man Problem‘ for the distinction between experimental and speculative philosophy. The apparent problem, according to some critics of the ESD, is that there were no speculative philosophers in the early modern period. In my response to that problem I listed The Duchess of Newcastle, Margaret Cavendish, as one of the few advocates of speculative philosophy in seventeenth-century England and in this post I want to explore her views in a little more depth. 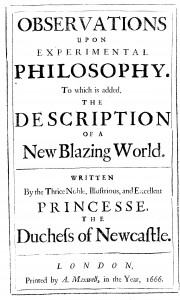 It is interesting to compare Cavendish’s views in this work with those of the young Robert Boyle a decade earlier. As I pointed out in my last post, in his ‘Of Naturall Philosophie’ of c. 1654, Boyle claims that there are two principles of natural philosophy, the senses and reason. He plumps for the senses. Cavendish in her Observations acquiesces in the very same principles, but takes the opposing line: for her, reason trumps the senses.

What is important for our interests here is not only the direct contrast with Boyle’s embryonic experimental philosophy, but the manner in which, for Cavendish, the terms of reference for the choice are between experimental and speculative philosophy. The following extracts give a feel for her position:

I say, that sense, which is more apt to be deluded than reason, cannot be the ground of reason, no more than art can be the ground of nature: … For how can a fool order his understanding by art, if nature has made it defective? or, how can a wise man trust his senses, if either the objects be not truly presented according to their natural figure and shape, or if the senses be defective, either through age, sickness, or other accidents … And hence I conclude, that experimental and mechanic philosophy cannot be above the speculative part, by reason most experiments have their rise from the speculative, so that the artist or mechanic is but a servant to the student. (Cavendish, Observations, ed. O’Neill (Cambridge), p. 49, emphasis added)

experimental philosophy has but a brittle, inconstant, and uncertain ground. And these artificial instruments, as microscopes, telescopes, and the like, which are now so highly applauded, who knows but they may within a short time have the same fate; and upon a better and more rational enquiry, be found deluders, rather than true informers (ibid., p. 99)

And toward the end of a long discussion of chemistry and chemical principles she reiterates her conclusion:

if reason be above sense, then speculative philosophy ought to be preferred before the experimental, because there can no reason be given for anything without it (ibid., p. 241)

Cavendish’s Observations first appeared at a very sensitive time for the Royal Society, for it had been the subject of much criticism from without and was in the process of securing an apologetical History of the Royal-Society by Thomas Sprat.

Now, there is no doubt that some of the more prominent Fellows of the Society are in view in her critique. Yet, it is important that we do not over-extend the target of the Observations, for, it is very much aimed at experimental philosophy and hardly makes reference to the Royal Society at all. Within a year of its publication the Duchess was to make a famous visit to the Society and the correspondence that ensued does not suggest that Henry Oldenburg and others regarded her as a hostile critic of the Society. This reinforces the view that her focus was more specific, namely, experimental philosophy.

Interestingly, after Cavendish’s death the following lines appeared in A Collection of Letters and Poems (London, 1678) written in her honour:

Philosophers must wander in the dark;
Now they of Truth can find no certain mark;
Since She their surest Guide is gone away,
They cannot chuse but miserably stray.
All did depend on Her, but She on none,
For her Philosophy was all her own.
She never did to the poor Refuge fly
Of Occult Quality or Sympathy.
She could a Reason for each Cause present,
Not trusting wholly to Experiment,
No Principles from others she purloyn’d,
But wisely Practice she with Speculation joyn’d. (A Collection, p. 166, emphasis added)

This poem in which these lines appear was penned by the poet Thomas Shadwell, author of The Virtuoso. Shadwell presents the Duchess as holding to a more balanced view of the relative value of practice and speculation than is warranted from her writings. But the fact that he has singled this out is indicative of just how central was this issue to thinkers of the day. 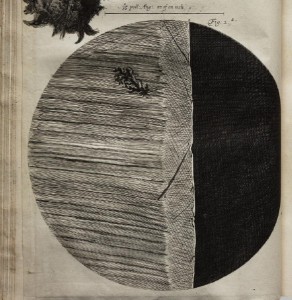