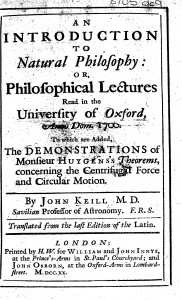 Newton on Experiment and Mathematics

In my last post, I discussed our 20 revised theses and why I altered thesis 5.  In this post, I’ll discuss why I replaced thesis 8.

8.  The development of Newton’s method from 1672 to 1687 appears to display a shift in emphasis from experiment to mathematics.

But at the start of this year, I replaced this thesis with a new thesis 8:

8.  In his early work, Newton’s use of the terms ‘hypothesis’ and ‘query’ are Baconian.  However, as Newton’s distinctive methodology develops, these terms take on different meanings.

I originally included thesis 8 because there are some obvious differences in the styles of Newton’s early work on optics and his Principia.  In Newton’s first paper on optics (1672), there is a strong emphasis on experiment.  Experiment drives his research and guides his rejection of various possible explanations of the phenomena under consideration.  Ultimately, he presents an Experimentum Crucis as proof for the certainty of his proposition that white light is heterogeneous.  In contrast, the Principia (1687) displays a strong emphasis on mathematics.  The full title of the work, the Author’s Preface to the Reader, and the fact that Book I opens with 11 lemmas outlining the mathematical framework of the work are just a few features that make it clear that Principia is primarily a mathematical treatise.

I now think that my original thesis 8 is misleading.

Firstly, as I have emphasised on this blog, Newton’s early work had a mathematical style that made it unique among his contemporaries.  While they recognised him as an experimental philosopher, his claims of obtaining certainty via geometrical proofs set him apart from the Baconian-experimental philosophers.  Moreover, his methodological statements show evidence of a tension between experiment and mathematical certainty.  For example, he says that the science of colours,

“depend[s] as well on Physicall Principles as on Mathematicall Demonstrations: And the absolute certainty of a Science cannot exceed the certainty of its Principles.  Now the evidence by wch I asserted the Propositions of colours is in the next words expressed to be from Experiments & so but Physicall: Whence the Propositions themselves can be esteemed no more then Physicall Principles of a Science.”

Secondly, Newton continued to identify as an experimental philosopher until the end of his life.  For example, in the General Scholium at the end of Principia, he says:

“and hypotheses, whether metaphysical or physical, or based on occult qualities, or mechanical, have no place in experimental philosophy.”

This resembles Newton’s earlier emphasis on grounding propositions on empirical evidence, rather than on speculative conjectures.

Thirdly, in Principia, Newton appears to be negotiating a similar tension between experiment and mathematical certainty that we saw in his early work.  For example, in the Scholium to the Laws of Motion he asserts the certainty of his Laws, while at the same time, acknowledging their experimental basis:

“The principles I have set forth are accepted by mathematicians and confirmed by experiments of many kinds.”

“By these examples [i.e. the experiments mentioned above] I wished only to show the wide range and the certainty of the third law of motion.”

A while ago, I wrote a post on the late seventeenth-century Italian natural philosopher, Geminiano Montanari. I argued that his stints of speculative reasoning were, after all, compatible with his allegiance to the experimental philosophy. In this post, I will focus on another aspect of Montanari’s experimentalism that appears to clash with his natural-philosophical practice: his view that, before even attempting to explain natural phenomena, we should compile a universal natural history.

The problem: disagreements and errors in natural philosophy

Montanari sees the compilation of a universal natural history as way of overcoming disagreements among philosophers. Having noted the many competing views on what “the first principles of natural things” may be, Montanari explains that this variety is due to the excessive self-confidence of “nearly all great minds”. Instead of jumping to first principles,

It was necessary to start philosophy from particular things, examining the whole of nature one piece after another, and to amass a rich capital of experiences so as to prepare the historical matter on whose basis one should later speculate about the reasons [of those experiences].

We can avoid errors and reach agreement on the principles of things by following Francis Bacon’s suggestion of building a natural history including “all experiences and other certain information that one could get from faithful sources”.

How much information should be gathered before we can discover the first principles of natural things?

[I]n order to find what the true, first and most universal principles of all things may be, it is not sufficient to make an induction from few terms, but it is necessary first to cognize all natural effects, so that one can later find a common reason which satisfies all experiences. But who can already boast to possess such an universal information?

Montanari’s answer is: nobody. It is still too early to make an induction from the observation of everything to its first cause. We must postpone the task of explaining the whole of nature and focus our strengths on the task of compiling natural histories.

Did Montanari do what he says?

He certainly collected many experiments and observations on manifold phenomena, from the capillary behaviour of liquids to the comets and celestial bodies. But he did not refrain from developing explanations of those phenomena, even though he was aware that his experiences were limited and many phenomena had not yet been observed. It is tempting to conclude that Montanari did not do what he says, that his allegiance to the Baconian view that a comprehensive data collection must precede natural-philosophical explanations was merely verbal, and that he was merely paying lip-service to the Baconian fashion of the time.

Montanari’s two-part discussions of specific phenomena follow, on a small scale, his favoured Baconian method that for establishing first principles. Regardless of whether he is discussing the capillary action, the behaviour of hot spheres of glass in water, or the position of a comet, Montanari starts by providing a natural history of the phenomenon at hand in the form of a list of observations and experiments. He then proceeds from the “historical matter” to its “reasons”, that is, he provides natural-philosophical explanations of the phenomena.

These explanations are fallible. Natural histories are inescapably incomplete and it is always possible that future experiments or observations invalidate his explanations. However, Montanari holds that it is possible to “deduce” explanations “with physico-mathematical evidence” from a suitable, even if limited, natural-historical basis. What warrants his explanations is the fact that they “explain all the other effects we have observed.”

In conclusion, Montanari does not violate his claim that we should build a universal natural history before identifying the very first principles of the whole nature. The magnitude of the task suggests that this may be only a regulative ideal and may even warrant a certain scepticism on whether we will ever be able to discover the first principles. However, discovering these principles is not necessary to do science for Montanari. What drives Montanari’s natural philosophy is the fact that he allows for fallible natural-philosophical explanations which are based on small-scale, necessarily incomplete, subject-specific natural histories.