The Darker Side of Baconianism

In my last post, I explained how Newton’s theory of the tides relied on empirical data drawn from all over the world. The Royal Society used its influence and wide-ranging networks to coordinate information gathering along trade routes, and thus construct a Baconian natural history. I pointed out that although the theory of the tides is considered a major theoretical achievement for Newtonian physics it was also a major empirical project and as such it is one of the major achievements of Baconian experimental philosophy. This case, however, also highlights how the Royal Society exploited its connections with politics and economics in pursuit of knowledge to benefit an elite monied class. In this post, I’m interested in exploring the connections between the Royal Society’s epistemic achievements and its being embedded within the political structures of the early modern world, particularly the rise of large trading empires.

If Bacon is considered to be the ‘Father of Modern Science’, then it’s worth reflecting on the nature of his legacy, and the role Baconianism played in shaping modern science. It is often tempting to split the objectivity and purity of science from the often complex, difficult, morally ambiguous world. In the same vein, reflections on the Royal Society and the birth of modern science often ignore the essential enabling role played by other of the British Empire’s activities: exploitative trade and slaving. Present-day philosophers of science increasingly reject the ‘value-free ideal’, recognising that scientific practice is best understood within its social, institutional and political context. If what are traditionally conceived of as non-epistemic values play an inextricable role in, say, modern medicine, then they likely do here as well. In this post, I’ll apply these ideas to the case of the tides, suggesting that it highlights a darker side of Baconianism.

The collection of tidal data was carried out by the Royal Society in cooperation with the Royal African Company and the East India Company. (When he discusses the Tonkin tides, for example, Newton appeals to data obtained by Francis Davenport, Commander of the Eagle—an East India Company vessel.) Both the Royal African and East India Companies engaged in extractive behaviours in their respective localities; extractive behaviours we now consider morally abhorrent (most strikingly the slave trade in Africa). While the Royal Society cannot be considered responsible for these acts, we might say that it played a role in legitimising, normalising and even celebrating them.

[I]f Gentlemen ‘condescend to engage in commerce, and to regard the Philosophy of Nature. The First of these since the King’s return has bin carry’d on with great vigour, by the Foundation of the Royal Company: to which as to the Twin-Sister of the Royal Society, we have reason as we go along, to wish all Prosperity. In both these Institutions begun together, our King has imitated the two most famous Works of the wisest of antient Kings: who at the same time sent to Ophir for Gold, and compos’d a Natural History, from the Cedar to the Shrub (Sprat, 1667: 407).

The two companies received their royal charters very soon after Charles II’s coronation. And both were held up as symbols of the Restoration—promises of prosperity to come. Sprat measures the success of the Royal Society largely in terms of its ability to exploit the trade network, praising the “Noble, and Inquisitive Genius” of English merchants (Sprat, 1667: 88). He writes:

But in forein, and remote affairs, their [i.e. the Royal Society Fellows’] Intentions, and their Advantages do farr exceed all others. For these, they have begun to settle a correspondence through all Countreys; and have taken such order, that in short time, there will scarce a Ship come up the Thames, that does not make some return of Experiments, as well as of Merchandize (Sprat, 1667: 86).

Sprat links the success of the Royal Society to its ability to exploit the trade networks; rhetoric which might have lent legitimacy and integrity to other actions carried out in the name of British supremacy.

Further, the direction of research reflected the economic and political interests of these trading companies. A history of tides was one of the projects suggested by Bacon in the appendix to his Novum organum, and as such, it is not surprising that the Royal Society committed resources to this project. However, the Royal Society could not have carried out this project without the support of British trade. A Baconian history of tides was necessarily a large-scale affair: information needed to be gathered from all over the globe. It wasn’t until the 17th century, when British trading companies sent ships all around the world, creating networks of merchants, priests and scholars, that such a project was even possible. But the knowledge that was produced was facilitated by, and in service of, those interests. 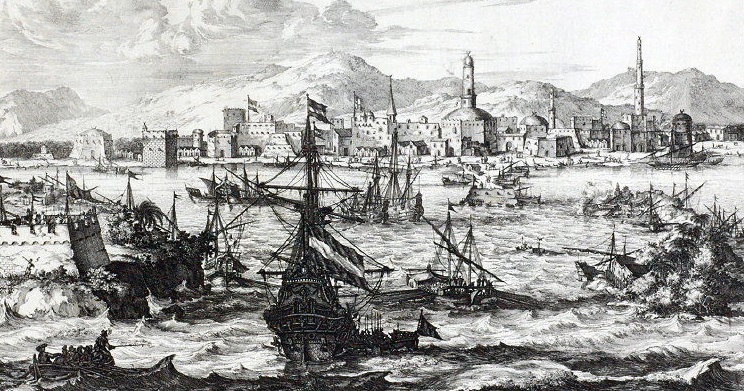 As global trade increased, knowledge of world-wide tidal patterns became increasingly important. European trading companies vied with one another for footholds in Africa and Asia and engaged in sea battles to gain political control in these regions (most notably the Anglo-Dutch Wars). Knowledge of tidal patterns was important both at sea, where failure to account for tidal flow could lead to navigation errors, and in narrower rivers and harbours—approaching a harbour with a shallow bar at low tide could mean a costly delay or worse. And so, the increasing importance of the tide problem and its increasing tractability stemmed from the same cause. Or, to put it another way, the direction of research was both enabled by, and carried out in the service of, the economic and political aspirations of British trade. In short, the trading empires did not merely enable the success of Newton’s work on the tides and other Royal Society projects; rather, they often directed and shaped them.

What conclusions should we draw from this? It comes as no surprise to historians, philosophers and sociologists of science that knowledge-production and the rest of society—including its exploitative, oppressive activities—are interwoven. However, the connection between natural philosophy and exploitative trade is only rarely made in presentations of the Royal Society’s work or Baconianism generally. Instead, science is often viewed as floating serenely and objectively above the darker aspects of early modern society. (This is surprising, given such rhetoric as Sprat’s.) But this case suggests that the Baconian requirement of information-gathering on a massive scale was enabled by—and perhaps itself worked to legitimate—the systems of trade which, often, represented the darkest parts of Western Europe. This is not to say that the Royal Society explicitly endorsed these features of the early modern world. Rather, the success of such large-scale Baconian projects may have tacitly whitewashed the social and political context.

What value is there in this sort of project? You might worry that, by casting a morally critical eye on the period, I lose my historian’s objectivity, believing myself to be coming from a position of superiority and moral maturity: a dangerous way to do historiography. Regardless of what objectivity might amount to in this context, I think it would be a mistake to couch the project in these terms. Rather, I am interested in what such cases can teach us about the nature of science, the value-free ideal and the role of value in science more generally. As such, this initial analysis leaves me with a few questions: Firstly, was the tidal data sullied, morally and/or epistemically, by the context of its collection? Secondly, if this data was morally sullied, were Newton and the others morally wrong to use it? Finally, what effect should this case have on our lauding of the early Royal Society as an exemplar of good science? How we eventually answer these questions at least partly depends on whether we think that the context of inquiry undermines the epistemic value of the project. In my next post, I’ll explore the idea that the epistemic injustice committed by the Royal Society in the name of Baconianism should undermine its status as exemplary.