The term ‘experimental philosophy’ has been around for a very long time. It began to appear in the titles of books in English in the early 1660s!

Early modern x-phi is not the same as contemporary x-phi, but we think that there are important and interesting connections between the two.

Early modern x-phi began as an approach to the study of nature that emphasised observation and experiment as the primary source of knowledge about the world and opposed the use of speculation from first principles and the use of hypotheses. It was a broad movement in natural philosophy (the science of nature) that soon spread to medicine, the study of the understanding, and, in the eighteenth century, to moral philosophy and aesthetics. (It is to be differentiated from the post-Kantian category of Empiricism. We’ll publish a post on this soon.)

Early modern x-phi and contemporary x-phi have at least one very important thing in common. The early modern experimental philosophers were fed up with speculations and theories about the world that were based on untested or untreatable principles: contemporary experimental philosophers are also tired of philosophical arguments about, say perception, that are based on premises on people’s intuitions that are either untested or in some cases have been shown to be false by scientific experiments.

One of the first experimental philosophers, Robert Boyle

But there are also important differences between the two. For instance, early modern x-phi was an all-encompassing approach to the study of nature, a scientific method if you will, whereas contemporary x-phi is more modest in its aspirations (though some see it as supplanting traditional philosophy).

Furthermore, early modern x-phi went through various incarnations because key methodological notions such as hypothesis, experiment and confirmation were stilly being clarified. For example, for its first four decades the early moderns thought that experimental philosophy should be done using the method of Baconian natural history. The success of Newton’s Principia changed all that. By contrast, contemporary x-phi has a sophisticated and robust set of methodological practices and principles on which to proceed.

We are no experts in the new experimental philosophy, but as we explore aspects of its old incarnation in the next posts, we’d be delighted to hear your views on how it relates to its new homonym.

Conference: The Rise of Empiricism

Empiricism is often regarded as the characterising feature of modern scientific method, and, in those approaches to psychology and the social and economic sciences that seek to model themselves on successful scientific practice in the physical and life sciences, it often acts as a model of good practice. Yet what is advocated is a very simplified model in which a rarefied notion of method as value-free inquiry is presented as the essence of empiricism. The failings of such a conception have long been evident, but the motivations behind the various forms of empiricism have remained obscure. The conference will explore new avenues to the original form of empiricism and show how it was able to directly engage questions of value in a novel and revealing way, and how its connection with ‘hard’ sciences was not merely to provide a methodological gloss on these, but went to the core of what scientific explanation consisted in.

Experimental Philosophy and the Origins of Empiricism

Our central thesis is that the most common and the most important distinction in early modern philosophy is that between Experimental and Speculative Philosophy. This is a distinction that many of the actors actually used, and, we claim, it can explain all that the traditional distinction can explain and more besides.

Here is how John Dunton describes philosophy in his The Young-Students-Library (1692):

Philosophy may be consider’d under these two Heads, Natural and Moral: The first of which, by Reason of the strange Alterations that have been made in it; may be again Subdivided into

We must consider, the distinction we have made of

, and, as much as possible,  Exclude the first, for an indefatigable and laborious Search into Natural Experiments, they being only the Certain, Sure Method to gather a true Body of Philosophy, for the Antient Way of clapping up an entire building of Sciences, upon pure Contemplation, may make indeed an

, but the Materials are such as can promise no lasting one.

Dunton’s comment in a student text reflects the fact that this distinction was very widespread within natural philosophy. Indeed it is to be found in the writings of almost all of the leading British philosophers in the late seventeenth century, including Locke, Boyle and Newton, and many continental philosophers as well. Moreover, by the mid-18th century this distinction between experimental and speculative philosophy had found its way into other branches of philosophy, such as moral philosophy, aesthetics and the study of the understanding. The experimental-speculative distinction thus provided the fundamental terms of reference within which some of the most important developments of early modern philosophy took shape.

We are Peter Anstey, Juan Manuel Gomez, Alberto Vanzo and Kirsten Walsh. We are four students of early modern philosophy based at the Department of Philosophy of the University of Otago in New Zealand. This is the blog of our research project which is entitled “Experimental Philosophy and the Origins of Empiricism”. You can read a description of our project here.

In this blog, we would like to share and discuss our ideas and research with you. We’ll also let you know about forthcoming events and recent publications which are relevant to our research. Whether you are a philosopher, an intellectual historian, a historian of philosophy or science, or you just have an interest for figures such as Boyle, Locke, Newton or Kant, we hope you’ll find these pages interesting.

Thanks for stopping by, and happy browsing! 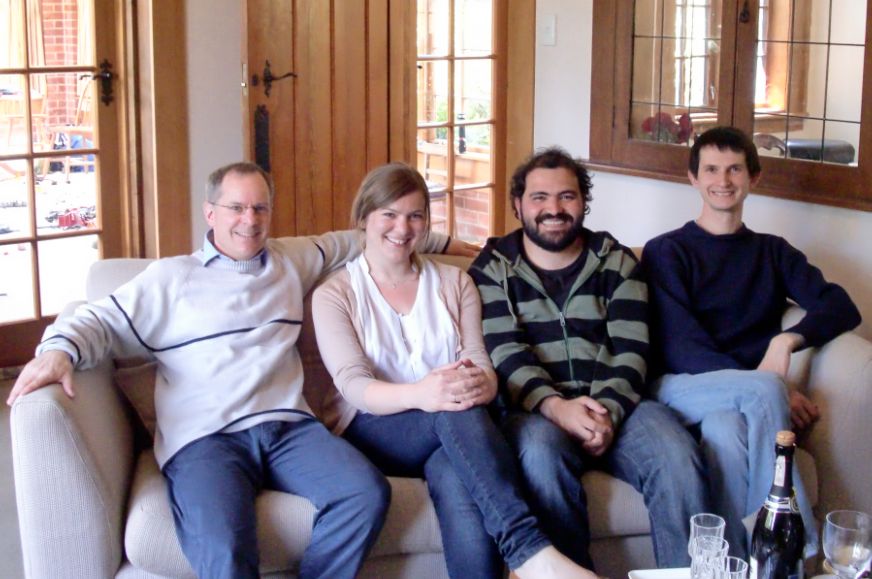 From left to right: Peter, Kirsten, Juan, and Alberto