Poia Rewi (Ngāti Manawa, Tūhoe, Te Arawa, Ngāti Whare and Tūwharetoa) was appointed as a Senior Lecturer in Te Tumu, School of Māori, Pacific and Indigenous Studies at the University of Otago in 2003.  Previously he had been a Māori Studies academic at the University of Waikato from 1992.  In 2016 he was promoted to professor.  He ended his service at Te Tumu in mid-2020 in July 2020 when he took up the role of Chief Executive/Tumu Whakarae of Te Mātāwai, a government organisation established under Te Ture mō Te Reo Māori 2016/The Māori Language Act 2016, to foster and support Māori language development for iwi.

Although the honour of professor emeritus is normally awarded to professors retiring from academia, the University’s Policy for the Award of the Title of Emeritus Professor allows the title to be made to a Professor who resigns, for example, to take up a distinguished public position.  Poia’s illustrious academic career (discussed below) and his leadership within Te Tumu and the university induced Professor Michael Reilly and other Te Tumu colleagues to seek this honour for our recently departed Dean. 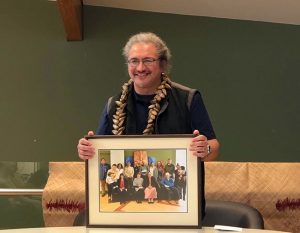 Professor Poia Rewi at his farewell at Te Tumu, 24 June 2020, with a photo featuring his Te Tumu colleagues.

Speaking to the Otago Bulletin Board on Poia’s departure in July last year, Professor Reilly described Poia as a “deeply humble, modest man who believes that it is for others to speak of the kumara’s sweetness.”

“His abiding passion is always first and last, te reo Māori. He advocates for its use by all New Zealanders. In his teaching and writing he always encourages his students and others to seek out and to utilise the rich diversity of language forms that the reo has inherited from the ancestors.”

“In Te Tumu Poia was generous with his time and showed hospitality to all. He became well known for volunteering to work in the kitchen, always concerned to ensure visitors, staff and students had plenty of food; a mark of the true leader, one who always thought of the well-being of others.”

Poia places much value on the importance of teaching the new generation, and work within the community. The growing success of his postgraduate students attests to his influence, and in 2012 he received the Otago University Students’ Association Supervisor of the Year Award. His knowledge of the reo and Māori performing arts resulted in him being appointed a judge at many regional Māori-language speaking competitions as well as being a judge at national, regional and tribal Māori performing arts competitions (adult/senior and high school levels). 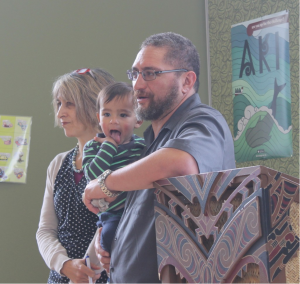 Poia with his moko. He had a knack with little children, who all seemed to love him.

Te Reo Māori has always been his passion. In 1997 he received a certificate as a translator and interpreter of te reo Māori from Te Taura Whiri i Te Reo Māori/The Māori Language Commission.  This is an exceedingly hard qualification to attain and demonstrates his high level of proficiency in the Māori language.  In 2005 Poia completed the first PhD solely in Te Reo Māori at the University of Otago.  It was a study of whaikōrero or Māori oratory through the words of a group of some 30 respected elders, many of them highly regarded orators on the marae throughout the country.

Subsequently, he revised and translated the thesis into English for publication as Whaikōrero: The World of Māori Oratory, published by Auckland University Press in 2010.  This book was the first major publication to study this major Māori art form.  In 2011 it was awarded the New Zealand Society of Authors – E. H. McCormick Best First Book Award for Non-Fiction.  Later, it became the basis for a 12 part Māori Television documentary, ‘Whaikōrero’, which won the Broadcasting-Māori medium category in Ngā Tohu Reo Māori 2014/the Māori Language Awards 2014.

As a researcher his dominant focus has been Te Reo Māori and the associated performing arts.  As a teacher of the reo to second language learners he has always been interested in the revitalisation of the reo and this became the centre of his research in more recent years.  In 2010 he was a lead investigator for two major grants from Ngā Pae o te Māramatanga, a national Centre of Excellence: ‘He Iho Reo, Developing a toolbox to support Māori Language Transmission and Maintenance’ ($226,439), and ‘Te Pae Tawhiti: “Te Kura Roa,”’ a jointly commissioned research project with Rāwinia Higgins of Victoria University of Wellington ($1,500,000).  A number of reports and publications were generated from these grants including 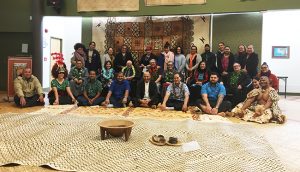 Another significant outcome of these research grants was the ZePA [Zero Passive Active] Māori language revitalisation model which Poia co-designed with Rāwinia Higgins.  This model identifies effect areas that allow planners, funders and deliverers of Māori language initiatives to be more specific and targeted in their approach.  This model has now been incorporated into policy and used to inform new legislation, such as, Te Ture mo Te Reo Māori (Māori Language Act 2016), and has been implemented to accelerate the learning of te reo in schools.

Further to his academic pursuits, Poia has been a prolific writer of Māori narrative over the years manifesting in published works as haka compositions, waiata, Māori language plays, fiction and nonfiction. This has resulted in several texts published in the Pikihuia short stories series. Poia himself has also adjudicated the Pikihuia Māori writers’ awards for a number of years. His most recent writing accolade was acknowledged in 2020 for a te reo Māori text.

Poia has completed 86 outputs, as shown in the summary on the left.

Poia served as Dean of Te Tumu between 2015 and 2020.  Another significant leadership role at Otago was as Associate Dean Māori, Division of Humanities, 2012-2014.  He was also Deputy Director of Ngā Pae o te Māramatanga, a national Centre of Research Excellence, between 2018-2020.

His recognition as a leader in the Māori world was evidenced by his service as Acting Chief Executive of  Te Taura Whiri i Te Reo Māori/The Māori Language Commission from 2014-2015.  He was also a member of the Commission’s Board between 2012-2015.  This outstanding service within, but also outside the university, helped pave the way to his new role at Te Mātāwai. Poia was elected in 2021 as a Fellow of the Royal Society of New Zealand Te Apārangi, “celebrated as one of the most active research specialists in Māori culture, language revitalisation, oral history and performing arts.”  Yet, due to his modesty, even some of his Te Tumu colleagues had no idea of the extent of his scholarship.

Poia Rewi always said when he first came down to Otago 18 years ago he had only wanted to stay for a few years before heading back up to the North Island. We knew that he was only on loan to us, and it was an honour to have him for the time that that we did. E hoa, me kore ake koe hei ārahi i a mātou, arā, i ō hoa mahi o Te Tumu me te whare wānanga, i te ao Māori kei waho o te whare wānanga, me ngā tini tāngata e kimi ana, e whakaū ana, e whakapiki ana i te reo Māori.

[Thanks to  Professor Michael Reilly and Dr Tangiwai Rewi for information for this post.] 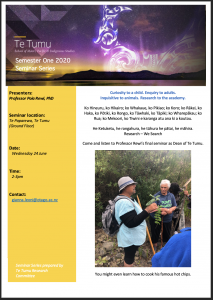 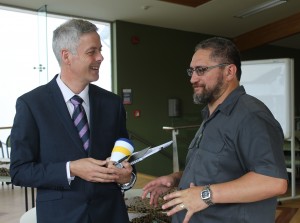 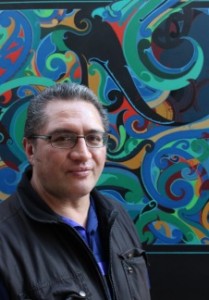