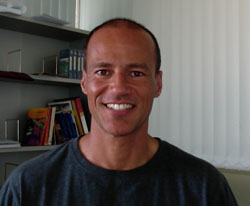 Congratulations to Dr Matiu Rātima, one of our Māori-language kaiako, who has recently been awarded a Ngā Pae Fulbright visiting scholarship to undertake research at the Mānoa campus of the University of Hawai`i, in Oahu. Matiu will be away from 10 August 2015 to 10 January 2016 during his Research and Study Leave.

While in Hawai’i where he’ll be working with Dr Keao Nesmith of the Kawaihuelani Center for Hawaiian Language on their research project titled, “Communicative Language Teaching for Indigenous Language Revitalisation”.

Globally there are few indigenous languages that are not under threat of decline or extinction. It has been estimated that of the world’s 6,912 known languages, 95% of these are spoken by less than 6% of the population. Experts forecast that less than 10 percent of the world’s living oral languages (in the year 1992) will still be spoken by 2092.  Urgent action, underpinned by good research, is vital to stop this decline.

1. How are indigenous languages being taught within universities?

2. What pedagogies are being applied?

3. What constitutes ‘best practice’ in indigenous language teaching? And;

4. How can Communicative Language Teaching help to produce speakers of indigenous languages?

The research focuses on three case studies, the teaching in universities of the Māori, Hawaiian and Tahitian languages.

Fulbright New Zealand promotes “mutual understanding between the peoples of New Zealand and the United States of America by means of educational and cultural exchange”, and offers a range of grants for New Zealand academics and graduates to research in America.