Traditional natural history, deriving from Pliny the Elder and Dioscorides, had flourished in the late Renaissance. It involved the mapping of nature through the classification of plants and animals and the assembling of information about their uses and habits. This traditional natural history continued throughout the 17th century and reached its zenith in the 18th century in the work of the likes of Carl Linnaeus. But this was neither the only form of natural history, nor, for that matter, was it the most important form for the experimental philosophers. Let me explain. 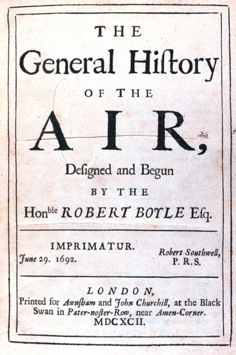 The experimental philosophy was initially developed and applied in the study of nature and only later was it applied more broadly to the other parts of philosophy. The first ‘version’ of the experimental philosophy was the Baconian method of natural history. This was inspired by Francis Bacon’s grand scheme for the renovation of knowledge of nature and in particular his novel approach to natural history.

The Baconian method involved the assembling of vast amounts of data about particular substances, qualities or states of bodies. In this way it was far broader in its scope than traditional natural history. To be sure, it included facts about generations––that is animal, plant and insect species-–but it included much more, such as histories of cold, of the air, of electrostatic phenomena and of fluidity and solidity, etc. According to the Baconian method, once all of the facts were collected they were to be ordered and structured in such a way as to facilitate theoretical, or speculative, reflection upon the phenomenon at hand. Thus, once all the facts about, say, human blood or the air, were gathered, then the natural philosopher would be in a position to develop a true and accurate philosophy of the blood or air.

This entry was posted in Ideas and tagged Bacon, natural history, Royal Society by Peter Anstey. Bookmark the permalink.