Turnbull’s Treatise on Ancient Painting and the Experimental/Speculative Distinction

In my previous post on David Fordyce’s thoughts on education, I showed how his speech to students on the commencement of the studies embodies the commitment to the method of the experimental philosophy. This is hardly surprising given that his teacher at Marischal, George Turnbull, expressed the same commitment a year before Fordyce’s speech in his Observations upon Liberal Education (1742). In this post I want to focus on an earlier text, his Treatise on Ancient Painting (1740). In addition to trying to find out “wherein the Excellence of Painting consists,”  he wants to show the usefulness of this art and its essential role in education. 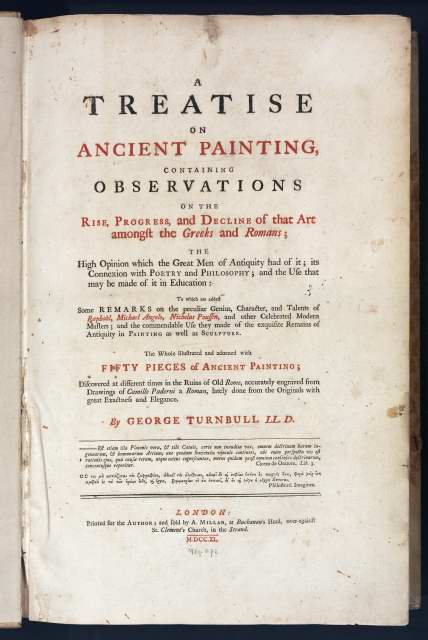 Relying heavily on texts by ancient authors, Turnbull claims that painting, and the arts in general, have always been (and should always be) connected to the study of nature. In this sense, pictures or paintings, when they reflect and are created in accordance to the laws of nature, can serve as proper samples for the study of nature. By analogy, moral paintings (which showcase the true excellence of art: Virtue) work as proper samples and ‘experiments’ for the study of human nature. (But the topic of ‘experiments’ in moral philosophy will have to wait a couple of posts, since I’m focusing strictly on the education issue first.)

The ESP distinction can be seen at work in the passages where Turnbull commends the experimental method and rejects speculation. Like he did in his Principles of Moral Philosophy, Turnbull expresses antipathy towards hypotheses and praises an emphasis on experiments and observation as the only true method for acquiring knowledge. When discussing one of the main purposes of travelling (since the Treatise on Ancient Painting was supposed to serve as a guide for young British travelers) he tells us the following:

The Ancients travelled to see different Countries, and to have thereby Opportunities of making solid Reflexions upon various Governments, Laws, Customs and Policies, and their Effects and Consequences with regard to the Happiness or misery of States, in order to import with them into their own Country, Knowledge founded on Fact and Observation, from which, as from a Treasure of Things new and old, sure and solid Rules and Maxims might be brought forth for their Country’s Benefit on every Emergency. For this is certain, that the real Knowledge of Mankind can no more be acquired by abstract Speculation without studying human Nature itself in its many various Forms and Appearances, than the real Knowledge of the material World by framing imaginary Hypotheses and Theories, without looking into nature itself: And no less variety of Observations is necessary to infer or establish general Rules and Maxims in the one than in the other Philosophy. (Emphasis added)

In the final chapters of the book Turnbull again reminds us about the ‘true philosophy,’ this time leaning on Socrates, Bacon, and Newton for support. Arguing for the unity of natural and moral philosophy in education, Turnbull discusses the pleasure derived from the study of nature:

Socrates long ago found fault with those pretended Enquirers into Nature, who amused themselves with unmeaning Words, and thought they were more knowing in Nature, because they could give high sounding Names to its various Effects; and did not inquire after the wise and good general Laws of Nature, and the excellent Purposes to which these steadily and unerringly work. My Lord Verulam tells us, that true Philosophy consists in gathering the Knowledge of Nature’s Laws from Experience and Observation. And Sir Isaac Newton hath indeed carried that true Science of Nature to a great height of Perfection… I shall only observe farther on this Head, that if this be the right method of improving and pursuing natural Philosophy, it must necessarily follow, that the Knowledge of the moral World ought likewise to be cultivated in the same manner, and can only be attain’d to by the like Method of enquiry: By investigating the general Laws to which, if there is any order in the moral World, or if it can be the Object of Knowledge, its Effects and Appearances must in like manner be reducible, as those in the corporeal World to theirs […]

As we can see, the works of George Turnbull and David Fordyce show evidence of the use of the ESP distinction in fields outside of natural philosophy. Beyond this, they show that the moral philosophy taught by these gentlemen in Aberdeen in the first half of the eighteenth century was driven by the characteristic attitude of the experimental method, shedding light on the development and roots of the ‘science of man’ in the eighteenth century.

This entry was posted in Ideas and tagged experimental philosophy, George Turnbull by Juan Manuel Gomez Paris. Bookmark the permalink.