Some time ago I wrote a post regarding David Fordyce’s Elements. This text was used almost in its entirety as the entry for moral philosophy in the Encyclopædia Britannica from the first edition in 1771 and until the seventh edition where it was modified and the replaced by an essay on the topic by William Alexander. I want to refer to the Encyclopædia again, this time to trace the description of four terms, namely ‘empiric,’ ‘experimental philosophy,’ ‘rational’ and ‘rationalism,’ and ‘speculative.’ I will focus on the first two terms in today’s post.

Empiric
The word ‘empiric’ appears in the first eight editions (1771 to 1898 when the ninth edition appeared). It is a very short entry and it restricts its use to method in medicine: 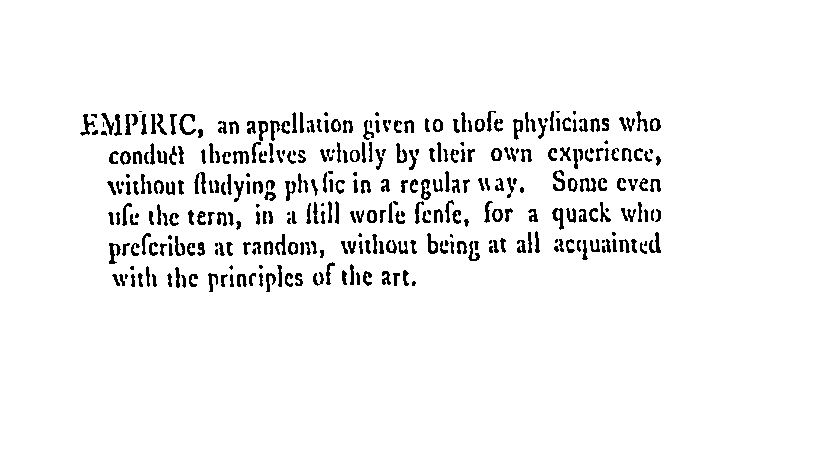 It is clear from the definition that the word had a different use than the one implied by the modern term ‘empiricism,’ which appeared for the first time in the eleventh edition(1910) of the Encyclopædia. In such editions the writer of the entry tells us that the term refers “in philosophy, [to] the theory that all knowledge is derived from sense-given data. It is opposed to all forms of intuitionalism, and holds that the mind is originally an absolute blank.” The last paragraph of the entry refers to the restricted definition of the term ‘empiric’ given in previous editions that I quoted above.

Experimental Philosophy
This term can be found in the first eight editions as well and disappears from the ninth edition onwards. The following is the definition from the first edition of the Encyclopædia: 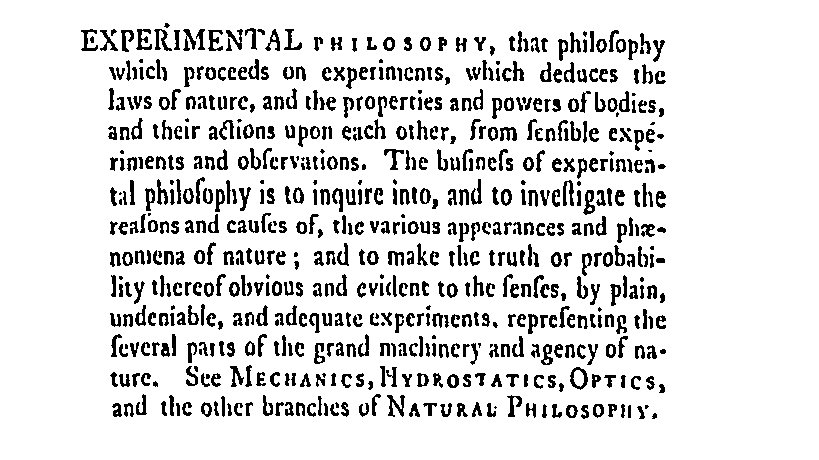 However, the definition for Experimental Philosophy was substantially expanded for editions two to six, and then reduced to one small paragraph in the eighth edition. From 1778 (second edition) to 1823 (sixth edition) the entry consists in a general description and refers to seventeen items that form “the foundations of the present system of experimental philosophy.” The items are basic definitions of the object of study of experimental philosophy: natural bodies and their properties, extension, arrangement of particles, law of gravity, properties of light, and so on. For the seventh edition the entry was reduced to this:

The entry is the same for the eighth edition but from the ninth edition onwards there is no entry for ‘experimental philosophy.’

As far as the Encyclopædia Britannica is concerned, we can see that the terms used in the eighteenth and nineteenth centuries are better explained by using the ESD framework instead of the RED. The contrast between the meaning of the term ’empiric’ in the medical context and the later twentieth century entry on ’empiricism’ illustrates this nicely. As we will see in my next post, the way the terms ‘speculative’ and ‘rational’ were used gives us more evidence to prefer the ESD framework for interpreting the early modern period.

This entry was posted in Ideas and tagged empiricism, experiment, experimental philosophy by Juan Manuel Gomez Paris. Bookmark the permalink.