The Academy of Lagado and the usefulness of science

In our recent book exhibition Experimental Philosophy: Old and New, there is a cabinet on literature, where we show how the experimental philosophy was depicted in the works of the literary figures of Voltaire, Alexander Pope, and Jonathan Swift. In this post I want to comment in a little bit more detail on Swift’s Gulliver’s Travels.

In the first part of the third voyage, Captain Lemuel Gulliver travels to the island of Laputa. As the exhibition caption for Swift’s book says, this flying island is a satirical representation of the Royal Society, criticizing how detached their members were from the real world, being too concerned with their science. To begin with, Laputa is a flying island, symbolizing the separation between the world of science and the world of ordinary people, the real world. Swift’s description of the inhabitants of the island stresses this point:

It seems, the Minds of these People are so taken up with intense Speculations, that they neither can speak, or attend to the Discourses of others, without being rouzed by some external Taction upon the Organs of speech and Hearing […]

Not only did they have a hard time communicating with each other, but they could not even understand things that were not presented in a mathematical or scientific manner. Gulliver relates that all their food was prepared in the form of geometrical figures; the mutton was cut in the form of an equilateral triangle, the beef in rhomboids, and the bread in cones and cylinders.

Though the island is a representation of both British science and the Court, the Academy of Lagado is a clear satire of the Royal Society. Swift’s description of the Academy questions the usefulness of the experiments carried out by the society. He mentions all sort of experiments that sound ridiculous: extracting sunbeams out of a cucumber, reducing human excrement to its original food, turning limestone into gunpowder, building houses by starting with the roof, and the list goes on. Some of these experiments might not sound that ridiculous to us, but they sure would to the eighteenth-century reader. 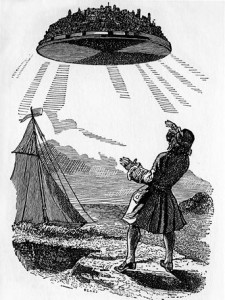 Swift goes on with his criticism of members of the Royal Society, and even makes a reference to the Newton-Leibniz priority dispute over the calculus. The point I want to direct our attention to is the underlying criticism that questions the usefulness of the experiments of the Royal Society. Marjorie Nicholson and Nora Mohler wrote an excellent paper on Swift and science, where they show that the descriptions given by Gulliver were all inspired by actual experiments published in the Philosophical Transactions. Though Swift exaggerates and mixes some of the actual experiments, it is clear that his aim was to question their use and value for society.

This raises an interesting issue regarding Philosophical Societies and their commitment to the experimental method. Inspired by Bacon’s New Atlantis, the scientific academies adopted the experimental method in part because it was aimed at the improvement of society, unlike pure speculation. Swift’s criticisms highlight a possible tension between the aim of improving society and the focus on experiments. I think Swift is being too harsh in his satire, and some of the experiments he exaggerates and tinkers with actually had practical application to ordinary people. Not only do we see this with some of the experiments carried out by the Royal Society, but the Scottish philosophical societies provide an even clearer example of the applications of their experiments for the improvement of society.

I do not think this was the case. What the shift in method caused was a change from the collection of facts to the deduction of principles from facts and observation. The preference for the Newtonian method doesn’t require the neglect of observation. This being the case, the tension raised by Swift’s satire should not be a worry, since it still allows experimental philosophy to be directed towards the improvement of mankind. In fact, Swift’s criticism aimed towards the uselessness of science is exactly what experimental philosophers argued was one of the downfalls of speculative philosophy: it was detached from the real world.

Could it be the case the experimental philosophers were guilty of the very same thing they thought was a very negative aspect of their speculative counterparts? As I have mentioned here I don’t think this is the case; but I’m interested in the thoughts of our readers regarding this issue.