G. W. Leibniz visited England in late October 1676. While there he renewed his acquaintance with Henry Oldenburg, Secretary of the Royal Society, and showed him his calculating device. After a week’s visit he boarded a ship bound for the Continent on 29 October, but for various reasons the ship was delayed and he used his time while moored in the Thames to write a dialogue about the nature of motion.

This dialogue, recently translated in full for the first time, has a very interesting preamble about natural philosophical methodology. This preamble may well have been stimulated by his recent visit to London, for it mentions some of the leading ideas of the new experimental philosophy that was practised there and promoted by many Fellows of the Royal Society of which Leibniz was a foreign member.

The dialogue is between Pacidius, aka Leibniz, Gallantius, Theophilus and Charinus. Pacidius opens with a comment about the danger of looking for causes when one does natural history. (I am quoting from the translation of Richard Arthur, G.W. Leibniz: The Labyrinth of the Continuum: Writings on the Continuum Problem, 1672–1686, New Haven: Yale University Press, 2002.) We take it up from Gallantius’ reply:

GALLANTIUS: I have certainly often wished that observations of nature, especially histories of diseases, could be presented to us unadorned and free from opinions, as are those of Hippocrates, and not accommodated to the opinions of Aristotle or Galen or somebody more recent. For we will only be able to revive philosophy when we have solid foundations for it. (p. 133)

Gallantius focuses on natural histories of disease, but his point applies more generally to the project of Baconian natural history (described here) which, as Oldenburg repeatedly claimed, was to provide solid foundations for natural philosophy. Theophilus replies:

THEOPHILUS: I do not doubt that the royal road is through experiments, but unless it is levelled out by reasoning we will make slow progress, and will still be stuck at the beginning after many generations. (p. 133)

Theophilus here raises the issue of the relation between the gleanings from observation and experiments, which is the focus of natural history, and the need to theorise in order to get an understanding of nature. The comment about being ‘stuck at the beginning after many generations’ is prescient because, as we have pointed out before on this blog, one of the reasons that the Baconian program of natural history faltered in the late seventeenth century was because it had delivered so little in the way of stimulus to new natural philosophy. Robert Hooke was sensitive to this very point in his ‘Discourse of Earthquakes’:

tho’ the things so collected [by our natural historians] may of themselves seem but like a rude heap of unpolish’d and unshap’d Materials, yet for the most part they are so qualified as that they may be fit for the beginning, at least of a solid, firm and lasting Structure of Philosophy. (Posthumous Works, London, 1705, p. 329)

… I am amazed at how many excellent observations we have …, at how many elegant experiments the chemists have performed, at what an abundance of things the botanists or anatomists have provided, which philosophers have not made use of, nor deduced from them whatever can be deduced.

PACIDIUS: But there does not yet exist a technique in natural philosophy for deducing whatever can be deduced from the data, as is done according to a definite order in Arithmetic and Geometry. … Once people have learnt to do this in natural philosophy … they will perhaps be surprised that many things were unknown to them for so long––which should not be put down to the laziness of the true method, which alone sheds light. (pp. 133/135)

Here Leibniz reveals that he was aware of the significant progress of the new experimental philosophy as applied in disciplines, such as chemistry, anatomy and botany, and at the same time the lack of progress in using this for developing a philosophy of nature. He puts it down to the lack of a method that is analogous to that in mathematics. The same lack of progress had been noticed by other critics of the new experimental philosophy, particularly the English wits, but rather than viewing this as a methodological deficiency they simply mocked the new natural philosophers in works such as Thomas Shadwell’s play The Virtuoso which appeared in 1676, the very same year as Leibniz’s visit.

Charinus, who speaks next in the dialogue, uses Pacidius’ observations as a segue into a discussion of the nature of motion, and so the methodological reflections tail off at this point. However, the little we do have gives us a fascinating window onto Leibniz’s views of the state and prospects of the new experimental philosophy with its emphasis on natural history in the mid-1670s. 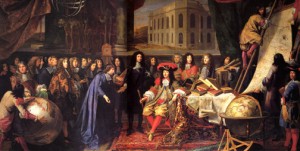