Butler and Clarke on the infinity of God

In my three previous posts I have been commenting on the experimental methodology in religion and the contrast between the preferred methods of Samuel Clarke and Joseph Butler. We saw bishop Halifax’s general description of the a priori and a posteriori methods, and then we examined Butler’s preference for the latter and Clarke’s adoption of the former. Today I want to conclude this series of posts on religion by focusing on one specific application of the a priori method and Butler’s criticism of it.

In his A Demonstration of the being and attributes of God (1704) Clarke provides an argument for the infinity of God. As we have already mentioned in previous posts, Clarke prefers the a priori method because it provides ‘demonstrable proof’ of the attributes of God, while the a posteriori method can only provide probable knowledge. Clarke appeals to a set of premises from which he concludes that God, i.e. the only self-existing being, must be infinite. The following is Jonathan Bennett’s rephrasing of Clarke’s argument:

‘x is finite’ implies that there are places at which x doesn’t exist.

It is a flat-out contradiction to suppose that something is both self-existent and finite.

So if you accept that God is self-existent, then you must also accept that he possesses the attribute of infinity. However, Butler is not convinced by this argument. In particular, Butler thinks that Clarke cannot say that if a being can be absent, without contradiction, from one place, then it can also be absent, without contradiction, from all places, which is exactly what Clarke claims is absurd. This is the passage that Butler criticises:

Butler points out that a being, without contradiction can be absent from another and all places as long as it is at different times, but it is most certainly an absurdity to claim that a finite being can be absent from all places at the same time, since this would entail that it ceases to exist. Clarke replies that Butler is mistaken here, since it is indeed possible for a finite being to be absent of all places and all times, since such being is not necessary. Clarke appropriately switches back the conversation to talk of necessary beings, but this still is not enough to satisfy Butler.

In a follow up letter to Clarke’s reply, Butler now objects to the definition of self-existence. Butler argues that from the claim that a being necessarily exists it does not follow that it exists everywhere; it only follows that such being must exist somewhere, but there is no contradiction in supposing it is absent from other places at the same time.

It seems that the key to the whole discussion is the idea of necessity. If the self-existent being is necessary, then this must be the case everywhere, so it would be a contradiction to think that a necessary being is absent at one place. Butler seems to be missing this point in his exchange with Clarke. However, to be fair to Butler, at the time the correspondence took place, Butler was still very young (21 years old), and he eventually changed his mind and accepted Clarke’s argument.

However interesting the discussion between Butler and Clarke, I only wanted to provide an example of the way the debate between a priori and a posteriori methods took place within a religious context. Butler might have eventually accepted Clarke’s argument for the infinity of God, but 20 years after his correspondence with Clarke he was going to prefer the a posteriori method in his Analogy (1736), holding on to his belief that in matters of faith probable knowledge is all we need.

Why did Butler end up preferring the a posteriori method even though he accepted Clarke’s argument? The answer lies in the limits of knowledge that resulted from a commitment to experimental philosophy. Figures like Butler and Turnbull applied the experimental method to subjects that went beyond the observation of the natural world. This meant that the application of the experimental method could not be as straightforward as it was in natural philosophy, for the objects under consideration (‘moral objects’) are unobservable in the sense that they cannot be experienced via the five external senses. Knowledge of the existence of a future state and the attributes of God is not directly accessible to us, given our human nature. Anything we can possibly now about such things must be by analogy to the knowledge we gain from the observation of the natural world. This is why our knowledge of these ‘moral objects’ can never be demonstrable, but only probable. From our observation of the natural world we can safely conclude that it is probable that there is a future state, and highly probable that God is infinite (omnipresent), but we can never construct a demonstrable proof of these conclusions.

In one of the final exchanges on this topic Butler confesses that he insisted on his objection because he wanted a demonstrable proof of the infinity of God, and this misled him:

“…your argument for the omnipresence of God seemed always to me very probable. But being very desirous to have it appear demonstrably conclusive, I was sometimes forced to say what was not altogether my opinion.”

Clarke suggests in his reply that this is a fault many are mislead into, and he blames one of the preferred targets of advocates of experimental philosophy, René Descartes:

“…the universal prevalency of Cartes’s absurd notions (teaching that matter is necessarily infinite and necessarily eternal, and ascribing all things to mere mechanic laws of motion, exclusive of final causes, and of all will and intelligence and divine Providence from the government of the world) hath incredibly blinded the eyes of common reason, and prevented men from discerning him in whom they live and move and have their being…”

The upshot of applying the experimental method to moral topics was that it could only provide probable (not demonstrable) knowledge. However, recognizing this limitation was far more reasonable than those chimeras constructed by speculative philosophers. 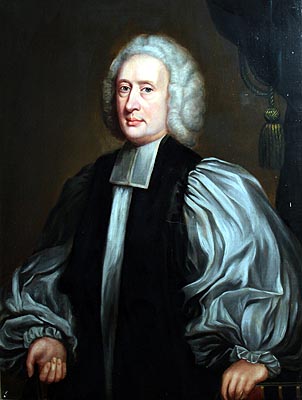